Kolkata, April 1 (Big Wire) Rajan Neogi and his wife Ratna (names changed) were walking towards Ganesh Talkies on Thursday afternoon when a 150-metre portion of the under-construction, 2.2 km Vivekananda Flyover collapsed in the congested market area of Burrabazar in Central Kolkata.

There was a devastating sound and even before they could realize what happened, they were charred to death in the fire that broke out due to the spilling of diesel and petrol from crashed vehicles.

As the 24-hour rescue operation came to an end on Friday afternoon, the death toll in the Kolkata flyover tragedy touched 24, while over 110 people have been injured in the incident. 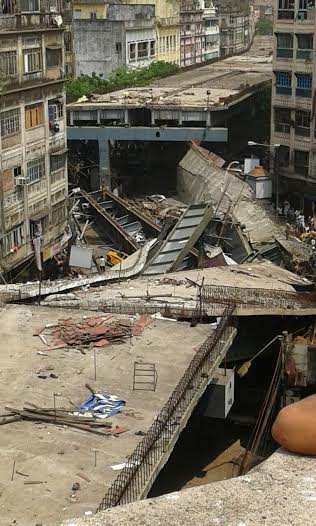 While Thursday’s mishap is a sure blow to the ruling Trinamool Congress (TMC) and West Bengal Chief Minister Mamata Banerjee ahead of the assembly elections scheduled to begin in the state from April 4, here’s a look at what is the project all about and what happened during and after the ‘accident’:

Details of the project

The construction of the flyover was a project under the Jawaharlal Nehru National Urban Renewal Mission (JnNURM). A total of Rs 153.6 crore was allotted for the project that was approved on September 19, 2008.

The government agency involved in the construction is Kolkata Metropolitan Development Authority (KMDA), while the executing agency is Hyderabad-based construction company IVRCL.

The construction started on February 24, 2009, and the was scheduled to be completed in August 2010. So far, as per media reports, the deadline was missed not just once but as many as nine times; the last one missed was in February 2016.

As per KMDA officials, the construction of the flyover was 67% complete, while the work was carried on between 11 pm and 5 am every day to avoid causing any harassment to commuters.

The 150-metre stretch of steel girder of the flyover was concreted on Wednesday night (March 30).

It was exactly 12.32 pm when the portion of the flyover just above the Rabindra Sarani-Kali Krishna Tagore Street intersection came crashing down trapping one bus, three taxis, three private cars, one truck, two motorcycles, two hand-pulled rickshaws, one van rickshaw and a unrecorded number of unsuspecting pedestrians and hawkers in the area.

It took a mere seven seconds (or may be a little more) to take down a flyover that was being built for the last seven years. It was the locals who started the rescue operations, dragging their trapped fellow-citizens from the debris.

As per eye-witnesses, the government took over two hours after the collapse to send help.

“Damn this state government! All the while we locals, civic police volunteers and fire officials were struggling with rescue operations. But we needed gas cutters and cranes. But the government neither sent National Disaster Response Force (NDRF) or the Army’s Engineering Brigade. Had we received early help, more lived could have been saved,” said Ankit, who was an eye-witness to the incident.

It was around 2.30 pm that a private construction firm extended help and sent cranes and gas cutters to speed up rescue operations.

“The whole administration was waiting for Mamata-di to come to the spot around 3 pm, gurgle out filth for the opposition and then order them to help us,” said the visibly angry 22-year-old engineering student. 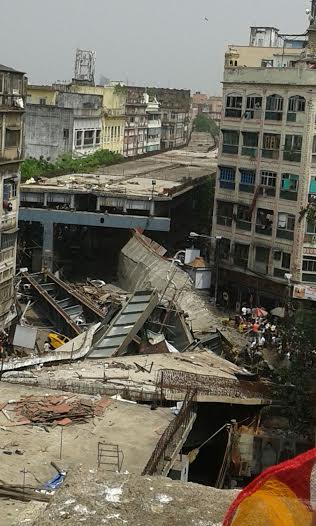 “IVRCL was given the contract for building the flyover during the Left regime. The construction also started during their tenure. Since then, we have not been updated on the project despite several reminders,” Banerjee told reporters as she visited the accident site.

“We will take the strongest action against the construction company and all those who are involved in this disaster,” she added.

However, CPI-M leader Asok Bhattacharya countered the accusation and said: “The construction was going on even in the last five years of TMC rule. Why was the government sitting blind-folded?”

Congress leader Adhir Chowdhury said the KMDA should be held responsible for the incident and that state Urban Development and Municipal Affairs Minister Firhad Hakim should be arrested.

Meanwhile, Prime Minister Narendra Modi called Mamata Banerjee from Washington, where he is currently attending a summit on nuclear security, and assured all possible help to her government.

But his BJP MP Babul Supriyo lashed out at the TMC and said the Mamata Banerjee government has “failed disastrously” and is responsible for the flyover collapse and loss of lives in the incident.

An act of God?

The first reaction the media got from IVRCL was that the incident was an ‘act of God’.

However, weird and shallow it might sound, senior IVRCL official K Panduranga Rao said: “The incident is nothing but an act of God. No one has any hand in it. We have our reputation well-grounded. In the past 27 years, none of our constructions faced a similar catastrophe.”

Meanwhile, the construction company has now hinted at a possibility of a bomb blast.

“There could have been a bomb blast. It needs to be investigated,” said IVRCL’s legal adviser Sheela Peddinti.