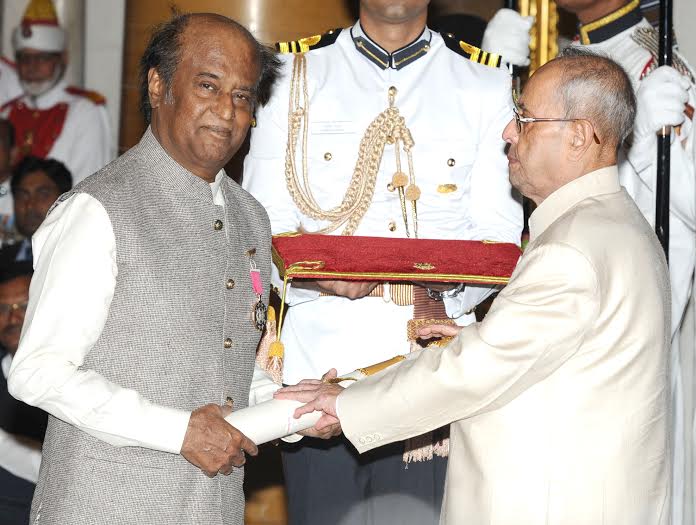 The President, Shri Pranab Mukherjee presenting the Padma Vibhushan Award to Shri Rajinikanth, at a Civil Investiture Ceremony, at Rashtrapati Bhavan, in New Delhi on April 12, 2016.

Since the announcement of the release of his 159th film, Kabali, Rajini mania has gripped several parts of the globe. And it is growing by the day.

The teaser of Kabali got an overwhelming one million views within an hour of its release on YouTube on May 1. By now, over 24 million people have already watched the teaser.

The Kabali fever has reached a crescendo with Malaysian carrier Air Asia, the official partner of the film, decking up a special flight with Rajinikanth’s image.

The flight is supposed to fly down the superstars Malaysian fans to Chennai when the film is released later this month.

“For all #Thalaivar fans! #Kabali is all set to paint the skies red with us. @superstarrajini @vcreations @amarabrol,” Air Asia handle tweeted on June 29 attaching a photograph of an aircraft painted with Rajini’s picture.

Kabali, which revolves around a mafia boss with a heart of gold, is written and directed by Pa Ranjit. It is expected to be released in around 5,000 across the globe.

Besides the original Tamil version, Kabali will also be released in Telugu, Hindi and Japanese. The makers are also thinking about a Chinese release.

Rajinikanth’s 1996 movie Muthu had taken Japan by storm after its dubbed version was released there two years later. Since then, Thalaivar’s global fan base has grown by leaps and bounds.

The frenzy for Kabali is amazing considering the fact that Rajinikanth’s last film Lingaa (2014) was just above average in the box office.

Though Lingaa recovered almost double of its investment of Rs.80 crore worldwide, in several areas in Tamil Nadu distributors lost money due to the high cost of the film.

Some even threatened to go on a protest and the superstar too reportedly tried to compensate them – a gesture rarely shown by any other top stars of the country.

Here are a few interesting things one would like to know about ‘Rajini sir’:

1. Rajinikanth was born in a Marathi family in Bangalore on December 12, 1950. The father of Shivaji Rao Gaekwad (Rajini’s real name) was a constable in Karnataka police.

His mother was a housewife and he had two brothers and a sister. All spoke Marathi at home and Kannada outside.

2. Rajinikanth started going to a primary school in the suburb of Haunmantha Nagar in Bangalore at the age of six.

After completing his school education, he did odd jobs to supplement family income till he got a secure job as a bus conductor in Bangalore Transport Service. He took part in stage plays by the side.

3. After seeing an advertisement for an acting course in a newly formed Madras Film Institute, Rajinikanth applied for it and joined the course with money pooled by friends and well-wishers.

During his time in the institute, renowned film director K. Balachander was impressed with his acting prowess during the staging of a play and suggested he should learn to speak Tamil language if he wanted to make a career in films.

4. Soon after, Balachander gave Rajinikanth his first break as an abusive husband in Apoorva Raagangal (1975), in which another screen legend of Tamil cinema, Kamaal Haasan, played the hero.

Though Haasan acted in films since he was a child, Apoorva Raagangal was his first film as the main lead.

5. With the film, Balachander also gave Shivaji Rao Gaekwad his screen name Rajinikanth, after a character in the director’s earlier film Major Chandrakanth (1966).

Rajinikanth’s inimitable acting style and mannerism that endeared him to the masses came to the fore with his very first films.

During the audition for the film, Rajinikanth lighted a cigarette after stylishly throwing it into his mouth and it impressed Balachander because he had not seen any actor doing it that way.

6. After Apoorva Raagangal opened to critical and commercial success, both Rajinikanth and Haasan became overnight stars – Haasan was flooded with offers to play hero and Rajini negative roles.

7. Rajinikanth went on to do a series of negative roles starting with new age cinema Katha Sangama (1976), in which he played a hoodlum raping a hapless blind woman when her husband was not home.

His first lead role landed in his lap in 1977 with a Telugu film Chilkamma Cheppindi. The same year, he also got his first positive role in Tamil film, Bhuvana Oru Kelvikkuri.

8. The next year, Rajinikanth went on to do 20 films in Tamil, Telugu and Kannada and by 1980 he had cemented his position as one of the most popular stars of south Indian cinema.

His unique antics and mannerism like flipping cigarettes, sunglasses, rotating chairs and wearing bandana added more fan following by the day. All his films were sold before being announced and became surefire hits.

9. Blockbuster Baasha (1995) elevated Rajinikanth to demigod status and he came across as a larger than a live character in films after films.

It was believed that whichever film Rajini touched turned gold.

10. His films are sold the moment they are announced. Several Rajini fan clubs having lakhs of members across south India ensure that his films turn out to be huge money-spinners.

On the other hand, the superstar pays back to society by involving in charitable works that add to his personal image as well as a fan base.

Though none of his films have failed at the box office, still he is known to compensate the distributors and exhibitors when any film performs below expectation.