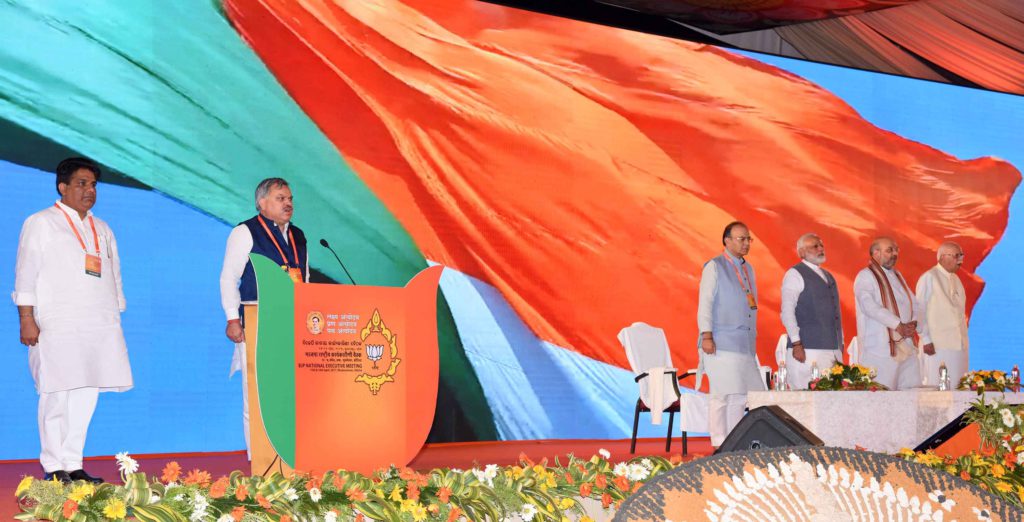 The Bharatiya Janata Party (BJP) seems to have cast the die for the forthcoming election to the Odisha state assembly in 2019 with the crystal clear directives of the Prime Minister Narendra Modi to install BJP chief ministers at every states of India.

Moreover, the BJP desires to snatch the power from the ruling Biju Janata Dal led by Navin Patanaik for the last 17 years uninterruptedly.

There is an interesting tale related to the recently concluded national executive meet of BJP in Bhubaneswar.

The BJP National President Amit Shah was received with a garland of 74 lotuses when he arrived at Bhubaneswar for the party’s meet.

‘There is no permanent foe or friend in politics’ summarizes the essence of politics since time immemorial.

This has once again been proved correct with the visit of Prime Minister Modi to Bhubaneswar in the context of attending the national executive meet of the BJP.

Both BJD and BJP entered into an electoral alliance and shared the power till their political beak-up in 2009.

However, in 2017 the BJP seems energized in the post-panchayat electoral success and wants its own government in 2019.

The political mood in BJP is to retain the nascent anti-incumbency in Odisha and further channelize it into major salvo against the incumbent Pattanaik government in the days to come.

Going by the strategies of BJP in the recently concluded elections to five state assemblies, it relied and harped on exclusively on the charismatic image of the Prime Minister.

No state leadership was accorded important frontline leadership and no candidate was projected as chief ministerial candidate in the run up to the state assemblies.

In all states, the names of chief ministers were decided only after the election results were declared.

BJP followed the same principle in the politically sensitive and crucial state like Uttar Pradesh.

In case of Odisha, despite the poor performances in Panchayat election, the incumbent Chief Minister Navin Patnaik still retains the moral high ground of integrity and image of a spot-less politician.

The ruling BJD will solely rely on this in 2019, which it had done in the General Election in 2014 and managed to withstand the ‘Modi wave’.

Politically, Patnaik has been maintaining a cordial relationship with central BJP leadership and at the same times confronts the BJP politically at the state level.

Even, Naveen Patnaik was among the few non-BJP chief ministers who had who extended support to Prime Minister Modi’s demonetization move.

In the previous the ruling BJD had won 116 seats and got 43.4 percent of vote share in comparison to BJP ‘s performance of winning 10 seats with a vote share of 18 percent.

Going by the statistics, the BJP has been on a slow yet continuous rise in both vote share and number of assembly seats since 2009.

The issues like farmers’ suicides, agrarian distress have dented the image of BJD led government in recent times.

The BJP has strategized to focus on two crucial eastern states Odisha and West Bengal and has tested a moral boosting win in the elections to grass root institutions in both states.

Moreover, as the Congress has been relegated to a distant third position, the future line of political confrontation will be between the BJP & BJD.

Given the rising popularity of BJP in Odisha, the ground level political functionaries of BJD might put pressure on BJD top leadership to sharpen their political attack on BJP in the days to come to check the blooming of 74 lotuses in the state.
*The author analyses policies and can be reached at prusethsujit@gmail.com. The views are personal.