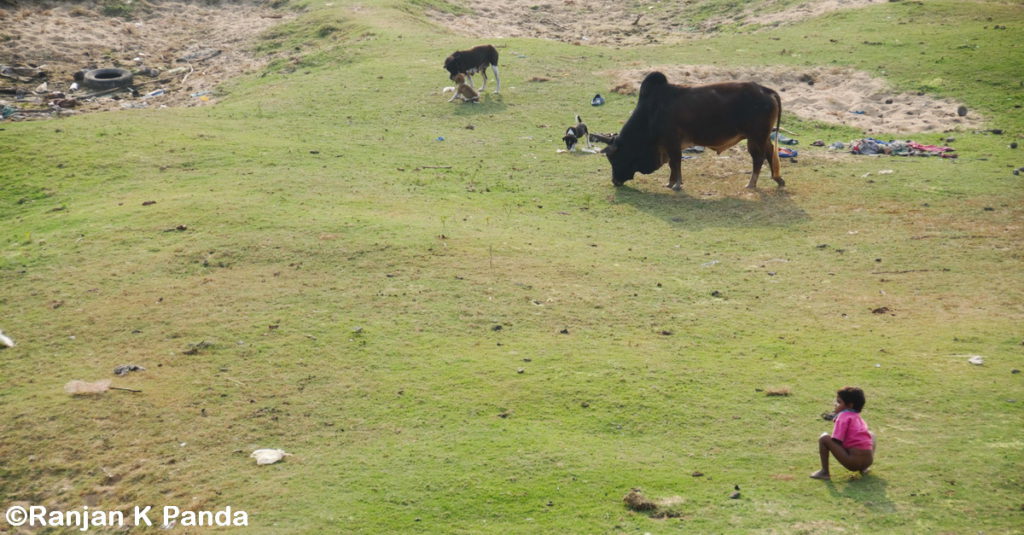 A newspaper reported that Odisha government is all set to notify the Solid Waste Management By-law 2017.

Based on this the 110 urban local bodies (ULBs) of the state will promulgate their own By-laws and implement the same.

What struck me in the same report that came up in a Sambalpur edition of an Odia daily is the possibility of introducing a fine for open defecators in the proposed By-law for Sambalpur Municipal Corporation.

If this is true, it’s dangerous. Recent incidents of abusing people – who defecate in the open – by the government and municipal authorities in many parts of the country shows how.

On June 16, three municipal council employees and the Commissioner of the Nagar Parishad in Pratapgarh district of Rajasthan beat to death a social activist because he tried to prevent them from taking photographs of slum dwelling women, who were out in the open to attend to the nature’s calls, to name and shame the women.

On July 23, the District Magistrate of Bihar’s Aurangabad district advised villagers to sell their wives if they failed to build toilets.

Again in Rajasthan, a Sub-Divisional Officer (SDO) of the Bhilwara district issued an order to snap electricity connection of all households of a village if they failed to build toilets within 15 days.

At the same time six villagers from nearby villages were arrested by district officials because they were caught defecating in the open, reported newspapers. The officials charged them with disrupting peace under Section 151 of the CrPC.

This September, a panchayat of Rambhakhedi village in Madhya Pradesh’s Betul district has imposed a fine of about Rs 75,000 on a family for open defecation and has sent notices to another 43 families.

Is defecating in open an offence?

A few years ago, one district collector of Sambalpur in Odisha, decided to do something great to clean up the city. He invited civil society members to take ideas and seek their cooperation. Some of the people suggested a fine system along with naming and shaming of open defecators.

The collector was in complete agreement as he also had something similar in his mind. I had objected to this saying there could be many reasons for open defecation and imposing fines may not solve all those. Then, in a democracy, we don’t have the right to coerce and fine people like this.

While open defecation may be a habitual issue for some people, compulsion – mostly due to poverty – is the reason for many.

The plan was shelved. However, the intention seems to be alive as can be seen from the news report, if that’s true.

And I have every reason to believe this is true because not only government officials but also many of the middle-class urban citizens, who often lead civil society groups working to fulfil ‘open defecation free’ missions do believe punishment to open defecators is an effective way to discourage them from committing that ‘offence’ as they often describe it.

They forget, not having a toilet is not an offence, nor it is illegal to defecate in the open.

They forget two more vital issues. One, if defecating in the open is an offence because it hampers the sanitation mission, then the government authorities are equally responsible for the same.

Two, wastes generated by the people having toilets and other sources such as industries and other establishments do pollute the urban areas including the water systems in graver manner than the people who defecate in the open.

Why then only point fingers at the poor people defecating in the open? Why not punish the municipality authorities and government officials who have not been able to treat the wastes their respective cities generate? If they have reasons for non-compliance, the people too have their own reasons.

A just-released audit report of the Comptroller and Auditor General of India shows how the government agencies have been lacking in fulfilling their sanitation targets.

The Orissa Water Supply and Sewerage Board (OWSSB) that was established in 1991 to execute the sewerage projects in the State, had projected to lay 1,567.14 km of sewer lines and sewage treatment plants (STPs) with a capacity of 379.20 MLD, which could not be achieved by March 2016, the audit found.

The audit looked into the progress of these projects till March 2016. In fact, there is no data in public domain that would tell us the exact progress in the last one and half year period, post-March 2016.

The audit further found that no baseline data about full cycle of sanitation was created for any of the 110 ULBs based on Odisha Urban Sanitation Strategy (OUSS), 2011.

Sewerage projects were taken up without preparing City Sanitation Plans (CSPs) and conforming to provisions of OUSS. As a result, the draft State Plan for implementing OUSS could not be prepared, pointed out the audit report.

The audit pointed out several other discrepancies and delays along with concerns regarding utilisation of financial resources. Contractors in charge of constructions have been let go without being penalised despite delays and other faults, shows the audit.

Deficiencies in preparation of Detailed Project Reports (DPRs) for Cuttack and Talcher cities resulted in execution of additional work and wasteful expenditures of 95.17 lakh rupees. That’s not all.

Due to slow progress of work, the OWSSB could utilise 1,336.54 crore out of 2,264.29 crore that was available under different schemes, resulting thereby in loss of 99.83 crore of central assistance.

In Puri, the audit points out, work orders were given violating existing rules citing ‘emergency’ but the project actually got delayed by three years and nine months.

And then improper execution of work led to laying of additional 1.307 km sewer lines. In the same city, delay in acquisition of land resulted in time overrun with consequential cost overrun of 2.44 crore.

Cuttack saw another kind of a serious problem. A 33 MLD (Million Litre per Day) capacity Sewage Treatment Plant (STP), constructed at Cuttack, was kept idle for 10 years as waste water did not flow into it.

In the industrial city Talcher, construction of the other STP was delayed and the contracts were also rescinded and retendered. However, no penalty was levied on the contractor.

The contractor in case of Bhubaneswar sewerage projects was also rescinded due to delay but no penalty was levied.

The delay resulted in a cost overrun by 228.22 crore. The CAG estimates that intended social benefit amounting to 592.55 crore could not be derived due to delay in execution of the projects in Cuttack and Bhubaneswar cities.

The CAG has also pointed out that due to non-completion of the project intended decrease in river polluttion did not happen.

Why punish the poor?

I am sure the government will come up with some excuses while meeting to these audit findings of the CAG, and as always, no official – either from the concerned government departments or from the ULBs – will be punished.

For people who cannot build individual toilets, there could be many issues including poverty and lack of space.

Many traditional habitation areas of our cities are cramped zones. Our public toilets are mostly pathetic in condition and people have other reasons – like lack of time, distance, etc. – for not using public toilets in the number we expect them to.

Affordability is also a question for the poorest of the poor among the people using public toilets. Now, they have added GST to even public toilet charges, making them further costly.

We need to redefine our strategies to motivate people and that has to involve compassionate awareness drive along with better and affordable public toilets, geographical spread of the same, and use of mobile toilets.

What we also need is a better and transparent governance system that complies with the waste management rules and does not let our water bodies and rivers get polluted like what they are now.