The 160-year- old story of Old Monk began in the picturesque quaint hill town of Kasauli in Himachal Pradesh, where a man named Edward Dyer set up a brewery in 1855.

Dyer later merged his brewery with Meakin and Co. Ltd, which had been founded by H.G.Meakin the late 1800’s.

The two companies merged shortly after World War I to form Mohan Meakin Limited. Little did Dyer know that a century later, his rum, that had warmed the British aristocracy and army alike, would become such a popular drink.

This oldest brewery of Asia had a very long standing relationship with the armed forces. They have traditionally supplied troops with beer and whiskey, and then with rum. To this day, Old monk remains a favorite with the men in uniform.

It started its journey from the Defence Forces & canteens where it was sold as ration back in 1960s. From the tight knit Defence circles, its popularity grew. And slowly it wove itself into the very fabric of India.

There were Old Monk rituals in the army. When a Jawan joined a unit, the first thing was to take him to the officers’ mess and get him drunk on Old Monk. It was launched in 1954, and for half a century was the largest selling dark rum in the world. It was, for many years, the biggest Indian Made Foreign Liquor (IMFL) brand.

Within half a century of its inception, it became the leading rum, not only in India, but across the whole world. It was just not rum, but a revolution. It contained 42.8% alcohol and was vatted for 7 years.

With an underlying flavour of vanilla, it outshone other dark rums from the Caribbean. About eight million bottles were sold worldwide annually.

Old Monk received several gold medals at the Monde World Selections. It was sold in the UK, USA, Japan, Russia, Finland, UAE, Canada and New Zealand among many others.

Since its launch in 1954, the product hasn’t changed. The bottle’s shape and design have remained exactly the same, as has its taste. Old Monk still comes in a distinctive bottle which the devotees love. 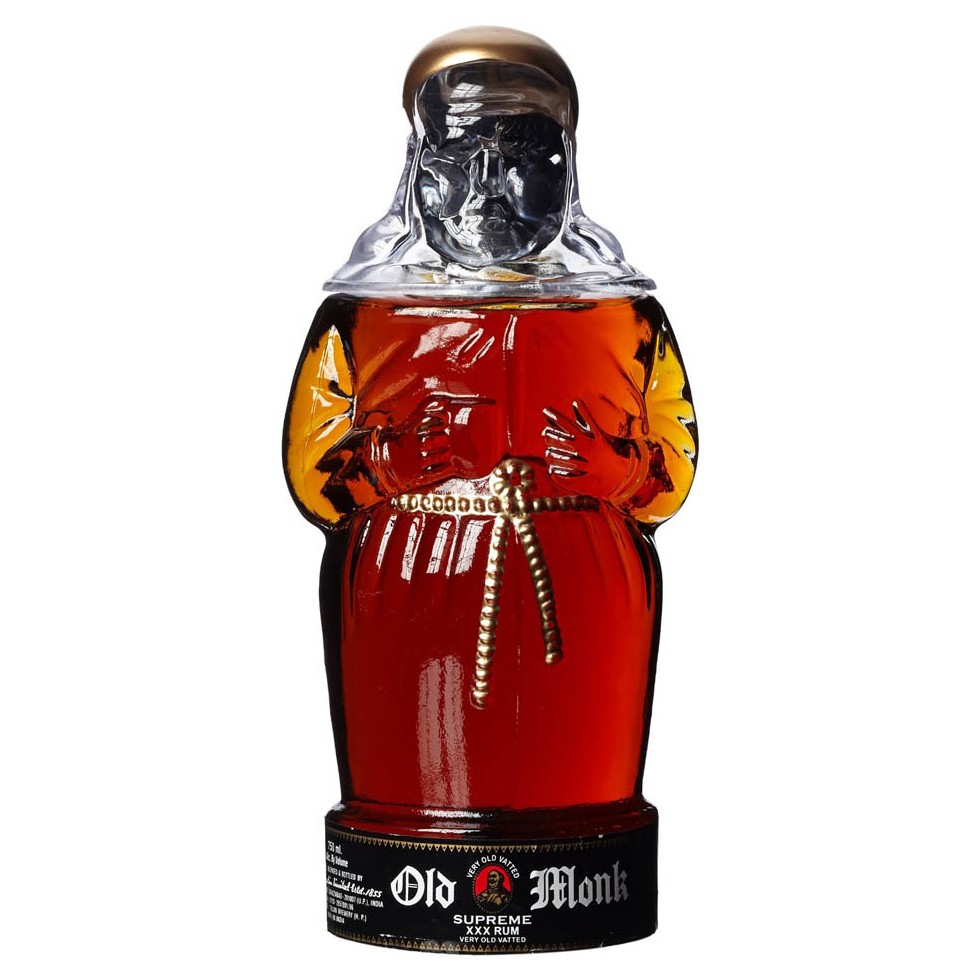 The flavour of the rum is as distinguishable as the bottle itself. Old Monk was originally launched in a short and stout bottle, with a textured surface that reminded one of stained glass windows.

The very name was soothing. Millions of drinkers have turned to the old faithful, either to drown their sorrows or share their joys.

In post independent India, if it was rum, it was Old Monk; the fans swore by its taste and could tell it apart from all other dark rums.

Even today, no drink can quite handle Indians like Old Monk. It cuts across all social strata. Rickshaw pullers to millionaires, diplomats, managers, executives, truck drivers, students, journalists and businessmen, all comprise of the legion which just loves the beaming old bald man.

No bar in India is quite complete without the obligatory bottle of Old Monk. It tastes great, whether on a beach shack in Goa, at any roadside Dhaba, at the Press Club of India or at the barroom of the Taj Hotel.

Old Monk is lovingly regarded by many as the “National Drink of India”.

The wonderful secret about Old Monk rum is that it is the only genuine spirit produced in India. Almost all spirits like whisky, gin, vodka and brandy are fakes.

Rum is distilled from molasses, a thick, sweetish by- product that is left after the cane juice is crystalized into sugar. Old Monk presented a much sweeter palate with notes of banana, vanilla and caramel.

Indian whisky is seldom distilled from barley, wheat or corn. The bottlers cheat by using neutral, tasteless alcohol extracted from molasses to which they add flavours and colours and, occasionally, a bit of genuine whisky imported in bulk. Indian whisky is a closer relative to rum than genuine whisky.

This is also true of Indian vodka, gin and brandy. Another exceptional attribute to the “Budha Sadhu” is that it became popular without any advertising.

Even today, numerous alcohol brands indulge in surrogate advertising in the name of “music cds” and “club soda”, but Old Monk was never advertised.

My tryst with the Old Monk started early. While in school, we used to go to Khurda Road on the outskirt of Odisha capital Bhubaneswar with our Anglo-Indian classmates during Christmas.

The spirit of bonhomie and joy used to be all prevalent in the small railway community. The Christmas tree, lights, streamers and cakes were de rigueur, so were the pretty Anglo-Indian girls, but the high point was the punch bowl which had Old Monk Rum along with other spirits.

We youngsters were only given the sweet home made wine, but most of us managed to slip a few capfuls from the stout bottle that used to be at the table.

I remember that every Anglo-Indian home had Old Monk bottles with a money plant in it. We used to get woozy, each trying to outdo the other. It was a faithful friend and consoler during our College and University days, mostly because it was the most affordable booze available.

You could drink it anytime and with anyone. You could have it neat, with cola or with soda. We drank it in happiness or sorrow, to celebrate the present or to forget the past.

In recent years, I have been to banquets in Delhi where servings of Old Monk Ice Cream, Old Monk stuffed Chocolate and Gulab Jamun dunked in Old Monk were a big hit.

But the squat bottles seem to be losing steam. Once it ruled India, now it holds just 5% of the market share, its biggest competitor being McDowell’s and Bacardi that sell both dark and white rum.

The rumour that Old Monk was struggling and may soon stop production, launched waves of protest on the internet, however, Mohan Meakin put all rumours to rest when they confirmed that the company has no plans to pull the dark rum out of the market.

The Old Monk will keep its beatific smile on. Cheers ! And come what may, it will always end in “Yo Ho Ho, and a Bottle of Rum”!.