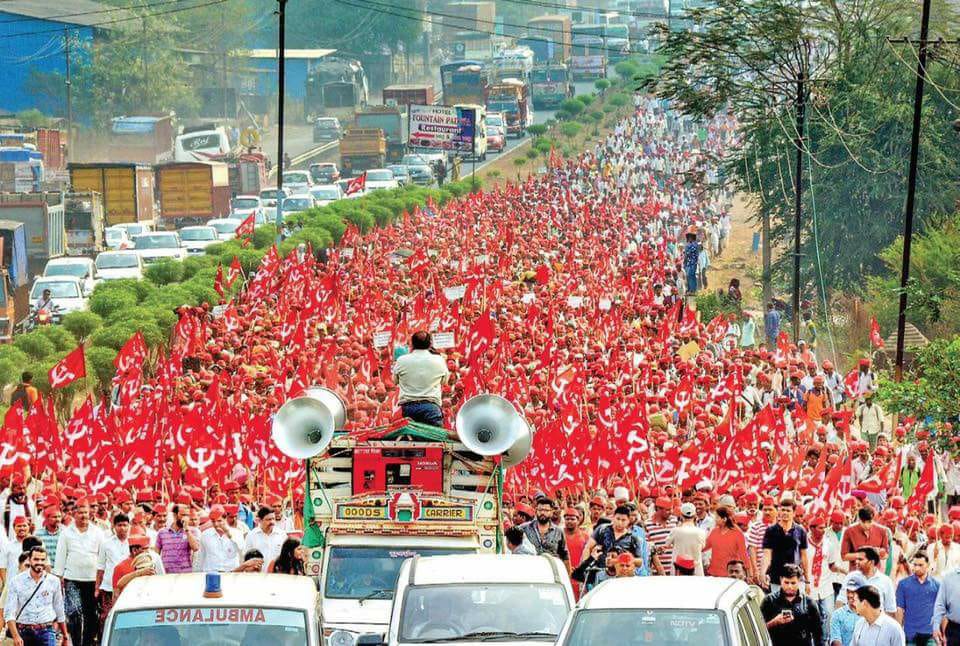 It all started last Tuesday when about 34,000 farmers across Maharashtra started the “Kisan Long March” from Nashik.

The men and women walked over 30 km each day under the scorching sun, resting only for meals and night’s sleep, to reach capital city Mumbai on Sunday night (Mar 11).

The farmers converged at Azad Maidan in south Mumbai early Monday (Mar 12) to stage their protest. Later in the day, they are scheduled to gherao Maharashtra Assembly and meet Chief Minister Devendra Fadnavis.

Here is everything you need to know about the Kisan Long March:

1. The protest is being led by members of the All India Kisan Sabha (AIKS), the farmers’ wing of Communist Party of India-Marxist (CPI-M), along with other farmers’ unions.

3. The farmers are demanding an unconditional waiver of loans and electricity bills, implementation of the Swaminathan Commission Report, including an announcement of minimum support price for agriculture produce and a pension scheme for farmers.

4. The farmers had faced large scale destruction of their crops due to unpredictable weather and poor rainfall. They claim though the Maharashtra government had announced a loan waiver scheme, the inefficient implementation has left them with no option but to protest.

5. “My son killed himself as he could not repay the loan. Where will we go now if the government does not help us?” asks a 77-year-old Vishwanath Bagare, who is also protesting with his 60-year-old wife Mirabai Mohan Badade.

Pertinently, their 38-year-old son Somnath consumed poison and killed himself in 2011 after being unable to repay a Rs. 1.5 lakh loan taken in 2008.

6. Maharashtra chief minister Devendra Fadnavis has assured that the farmers’ demands will be discussed and a solution meted out to them soon.

He held a high-level meeting on Sunday to assess the situation. “We are with the farmers. We find their demands genuine. A six-member cabinet committee has been set up to find a solution to their demands,” he told reporters after the meeting.

“We have out full support with you all. If required, we will even participate in your protest,” Aaditya Thackeray had told the farmers.

8. The common people of Maharashtra are also coming out to help distressed farmers. As they walked into Thane on Saturday night (Mar 10), local people flocked the streets, some interacting with them, some clicking selfies, while others offering them food, water and footwear.

9. The scene was same in Mumbai too, where Mumbaikars came out on the streets on Sunday night to offer food and water to the farmers.

10. Though they had their issues to solve, the farmers showed their heart when they marched extra miles all night on Sunday, and even made sure to reach Azad Maidan at the crack of dawn, so that their protests don’t cause any inconvenience to students appearing for the ongoing board examinations.