Solapur, Maharashtra, May 22 2018  Perfectly adapted to dry land farming, the nutrient-rich moringa has become the crop of choice among many farmers in drought-prone Solapur, earning them a steady income throughout the year Its 8 am on a hot day of May and a steady stream of visitors are already at Bala Shivaji Patil’s 4-acre farm in Uplai Khurd village in Madha taluka of Solapur district. The 30-year-old farmer, who left school in the ninth standard and is known as the lakhpati shetkari (rich farmer), is taking his unannounced guests from distant places around his farm, explaining how the stick-like fruit called shewga (also known as moringa or drumstick) has brought prosperity to his six-member family. This has been done without too much effort, trifling investment and very little irrigation, he explains.

Krishiratan, the two-storied house of the Patil family with a statue of a farmer standing atop the humble structure that can be seen from a distance, is proof what Bala has achieved. “I began with two acres in 2011 and now have four acres under moringa, with each acre fetching me around Rs 4 lakhs,” Bala told VillageSquare.in. He is the successful author of a book titled Crorepati Banvel Shewga (Moringa can make you a millionaire),which has sold over 4,000 copies since it was published in 2016.

Such stories of Solapur farmers who have seen prosperity by cultivating moringa has become commonplace in this drought-prone district of Maharashtra and is being emulated by others in dry-zone areas like Buldhana, Sangli, Osmanabad, Latur, Beed, Satara, Amravati and others in the state.

Dependent upon scanty rainfall, 91.5% of the total cultivated area in the district is under dry land farming. The annual rainfall which is just 625 mm, compared to 3,255 mm in the Konkan region, determines the pattern of crops, its rotation and the land’s productivity. While the eastern zone comprising Barshi, North Solapur, South Solapur and Akkalkot talukas has assured but scanty rainfall, the central zone comprising Mohol, Mangalwedha, eastern part of Pandharpur and Madha talukas and the western zone, which comprises the scarcity areas of Karmala, Sangola and Malshiras talukas, and the western parts of Madha and Pandharpur talukas, have uncertain rainfall.

In short, Solapur has the dubious distinction of being identified as one of the 99 districtsin India as drought-prone. Some of the extreme weather patterns here can be attributed to climate change. As global temperatures increase, extended periods of drought, heat waves, and unpredictable rainfall have intensified. The annual average rainfall tremendously varies from year to year, directly impacting agriculture and horticulture activities.

The Ujani dam, built on the Bhima River at a cost of Rs 33 billion and serving around 500 sq. km of Solapur district, has helped farmers grow the water-intensive crop of sugarcane and others like wheat, millet and cotton. In the drier areas, farmers grow horticulture crops that require little irrigation, such as pomegranate, chilli, papaya, custard apple and moringa.

In the 70s and 80s, farmers here tried their hand with bhor (jujube or Indian plum), but by the 90s, they were slowly shifting to the new hybrid varieties of pomegranate developed by the local agriculture university. However, prone to pest attacks, the pomegranate-growing area, which was as at its peak in 2011 with 45,413 ha, was reduced to only 10,000 ha by 2013.

Considering the problems of vegetable growers, the district’s Krishi Vigyan Kendra(KVK) introduced the drought tolerant and high-yielding variety of drumstick (PKM-2 variety developed by Tamil Nadu Agricultural University) in 2000-01. “As drumstick yields around the year, the crop has been embraced by the farmers of Solapur,” Vikas Bhise, horticulturist, KVK, told VillageSquare.in. “And an estimated 1,500 ha is presently under drumstick. The cultivation is spreading as droughts become a regular feature here.”

Moringa is among that rare horticulture crop which begins fruiting — the lengthy pod rich in calcium and other minerals is a must-be ingredient in sambhar and also used as a vegetable — within six months of planting and continues to do so for a period of eight to nine years.

According to Adinath Chavan, the editor of Agrowon, a popular Marathi farm daily from the Sakal Group, farmers of Solapur have been enterprising in crop selection, considering they inhabit the state’s most dry zone. “They are likely to continue growing moringa as long as it offers good returns,” Chavan told VillageSquare.in. “Earlier, they had tried horticulture crops like bhor and pomegranate, but abandoned them either due to pest attack or when it became non-profitable.”

Farmer Appa Karmakar’s is another success story of growing moringa. In Angar village, with a sparse vegetative landscape, the sun beating at 40 degrees and the squat houses widely distributed, has become a go-to destination for the arid zone farmers from Gujarat, Madhya Pradesh, Uttar Pradesh, Telangana and Andhra Pradesh. At a distance of 47 km from Sholapur town, this 545-household village that hosts his 3-acre farm has become a shining example of dry land farming at its best.

Among the early adaptors of moringa, this postgraduate introduced the perennially fruiting plant in 2012 and grows it with an intercrop of chilies, papaya, pomegranate and guava, besides marigold, which has been traditionally used to control pests. The farm produces 50 tons of drumsticks every year, which sells for Rs 30 to Rs 80 a kg in the wholesale market, fetching approximately Rs 6 lakh a year. His climate-smart horticulture improvisations with minimum inputs getting good returns attract farmers, journalists, agricultural graduates and agriculture experts to his farm.

“Having heard that I made Rs 7 lakh in the first six months of planting moringa and make around Rs 15 lakhs a year, we get more than 50 visitors a day and an equal number of calls from farmers wanting to know whether they too can replicate this experiment. Once they visit the farm, they are convinced that they too can do it,” Appa, 42, told VillageSquare.in while fielding a query from a Telangana farmer  interested in cultivating drumsticks.

After a couple of years, moringa’s yield reduces and the pod color changes, requiring the introduction of newer varieties. In view of this, KVK introduced the Bhagya variety developed by University of Horticultural Sciences, Bagalkot in Karnataka in 2008 while discontinuing the promotion of PKM 1 and PKM 2 varieties. The other varieties widely grown in Solapur include Siddhivinayak, ODC Vasanthi and Rohit 1.

Rohit 1 has been developed by Nashik’s Balasaheb Marale, which has travelled to places like Komomoto in Japan and Arizona in the US. Rohit-1 is under validation by the National Innovation Foundation. 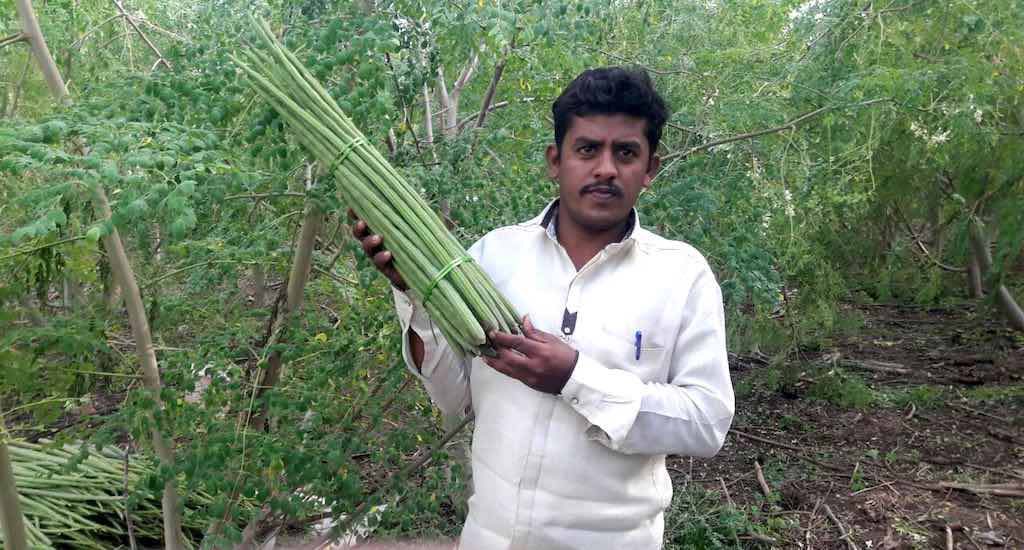 Bhise of KVK informs that 2,000-odd farmers with an average landholding of one acre earn anything between Rs1 lakh and Rs 2 lakh per acre growing moringa. Atul Bagal of Vadegaon village in Sangola taluka, who began growing moringa since February 2016 on three acres, is one of them. He has so far produced 115 tons of this fruit.

Mahadev Shankar Nanavare of Wadwal Nagnath village in Mohol taluka, who besides growing moringa on 20,000 sq. ft of land, also grows sugarcane, guava, pomegranate, wheat and fodder on 4.5 acres. “The 250 moringa trees give me between Rs 70,000 to Rs 75,000 annually,” Nanavare told VillageSquare.in.

“I’m a toying with the idea of creating a farmer produce cooperative to produce moringa leaf powder and moringa oil,” says Karmakar of Angar village. “Hope the banks fund this project.”

The article was first appeared in VillageSquare.in