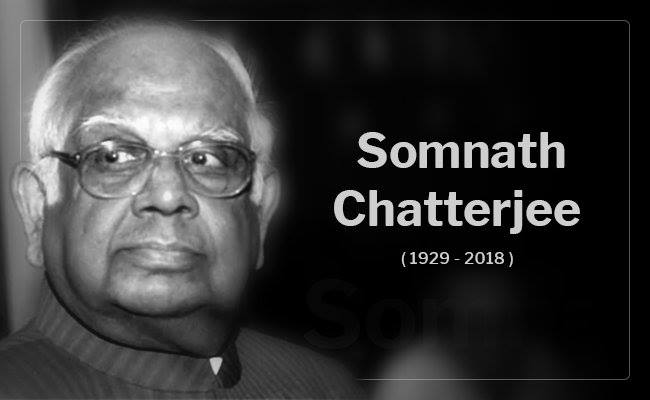 Veteran Communist Party of India (Marxist) [CPI-M] leader and former Lok Sabha Speaker Somnath Chatterjee passed away at a Kolkata hospital on Monday (Aug 13). He was 89.

Somnath Chatterjee was admitted at Belle Vue Clinic on Aug 7 for a kidney-related ailment.

He suffered a massive cardiac arrest on Sunday (Aug 12) and was put on ventilator support. He passed away at 8.15 am on Monday (Aug 13) due to multi-organ failure, said Belle Vue Clinic CEO Pradip Tandon.

The veteran politician was earlier hospitalized on June 25 following a haemorrhagic stroke.

Though as per the last wish of the CPI-M veteran, his body was donated to SSKM Hospital, West Bengal Chief Minister Mamata Banerjee made sure Somnath Chatterjee was accorded a 21-gun salute – the highest state honour – at the West Bengal Assembly.

Mourning his demise, Prime Minister Narendra Modi tweeted: “Former MP and Speaker Shri Somnath Chatterjee was a stalwart of Indian politics. He made our Parliamentary democracy richer and was a strong voice for the well-being of the poor and vulnerable. Anguished by his demise. My thoughts are with his family and supporters.”

“Sorry to hear of the passing of Shri Somnath Chatterjee, former Speaker of the Lok Sabha and a veteran parliamentarian who had a forceful presence in the House. A loss for public life in Bengal and India. My condolences to his family and innumerable well-wishers,” said President of India Ram Nath Kovind.

Congress president Rahul Gandhi said: “I mourn the passing away of Shri Somnath Chatterjee, 10 term MP and former Speaker of the Lok Sabha. He was an institution. Greatly respected and admired by all parliamentarians, across party lines. My condolences to his family at this time of grief.”

Delhi chief minister Arvind Kejriwal posted: “Extremely sad news about Somnath Chatterjee ji. One of the greatest parliamentarians of contemporary times he will always be missed by this country. He will be remembered among the greatest Lok Sabha Speakers India ever had.”

Congress veteran and former President of India Pranab Mukherjee tweeted: “My deepest condolences on the demise of Shri Somnath Chatterjee. An outstanding Parliamentarian & Constitutionalist,he remained committed to the cause of people with a firm belief in pragmatic consensus. In his demise I have lost a personal friend &the Nation has lost a great son.”

Senior CPI-M leader Md. Salim tweeted: “I lost a father figure. My tribute to #SomnathChatterjee whom I owe a lot. Salute to a great Parliamentarian.”

Former Jammu and Kashmir chief minister Omar Abdullah condoled: “Rest in peace now Somnath da. It was an honour to have known you & to have learnt from you. The Lok Sabha was much the poorer by your absence in recent years. India has lost a parliamentary giant today.”

Mentioning the recent death of DMK chief M Karunanidhi, Trinamool Congress (TMC) leader Derek O’Brien‏ tweeted: “One week apart, they bid us farewell. Between them, they who won 23 elections! #Kalaignar won all the Assembly Elections (13) that he contested & #SomnathChatterjee was elected to the Lok Sabha 10 times.”

Dravida Munnetra Kazhagam (DMK) working president MK Stalin posted: “Extremely saddened to hear about the passing of #SomnathChatterjee, former Speaker – Lok Sabha. He was part of the golden jubilee celebration of Thalaivar Kalaignar in 2007 and was a well-wisher of our party. On behalf of the DMK, I convey our heartfelt condolences to his family.”

Here are 10 facts you should know about Somnath Chatterjee:

1. Somnath Chatterjee was completed his B.A. and M.A. in law from Jesus College, a constituent college of the University of Cambridge, England.

2. His father Nirmal Chandra Chatterjee was not only a prominent lawyer, but also a Hindu revivalist and nationalist. He was one of the founders of Akhil Bharatiya Hindu Mahasabha. He even formed All India Civil Liberties Union and started an agitation for the release of CPI-M leaders who were arrested post the ban of the party in 1948 at the order of the then Prime Minister Jawaharlal Nehru.

3. Before joining politics, Somnath Chatterjee was an advocate at the Calcutta High Court.

5. Since then, he was re-elected nine times, except in 1984, when he lost the Jadavpur Lok Sabha constituency to Mamata Banerjee.

7. The 10th time he was elected to the Lok Sabha was in 2004 from Bolpur Lok Sabha constituency, a CPI-M stronghold.

8. Post the election in 2004, the veteran politician was appointed as the Protem Speaker. On June 4, 2004, he was unanimously elected as the Speaker of the 14th Lok Sabha.

9. After Ganesh Vasudev Mavalankar, he was the second Protem Speaker to be elected Speaker.