Catering to a very niche clientele and not the masses, luxury housing has evolved at a rapid pace in India. The nouveau riche (newly rich) prefer discreet opulence over the commonplace, and look for experiential luxury, both at a unit and project level.

From start-up founders to high-salaried professionals, high net-worth individuals are prompting developers who understand the luxury segment to think increasingly out of the box and deliver something unique and aspirational.

On the ‘other side of the fence’, affordable housing has taken centre-stage in India over the past 3-4 years, not only because of the massive demand for it but also due to the concerted efforts by the Government to cater to it. Against such a backdrop, there are rising speculations that luxury housing is losing its sheen to the affordable segment.

To add to luxury housing’s woes, DeMo in late 2016 had a cascading effect on the supply and sales in this segment because it tended to attract the bulk of unaccounted cash which was, until then, flowing rather freely into both the primary and secondary sales markets.

ANAROCK data also confirms that while there was a total decline of 41% in the overall new housing supply in 2017 from the preceding year, luxury properties priced over Rs. 1.5 crore saw the maximum fall of a staggering 49%.

The numbers certainly paint a gloomy picture for luxury housing, but it is completely inappropriate to sound its death knell. Despite its relatively small market size, luxury housing is still a fairly important segment of Indian real estate.

Luxury housing has its own clientele – a specific class of people who aspire to live in high-class homes in key locations, embellished with state-of-art amenities. The robust Indian economy, coupled with the mushrooming of a myriad successful start-up, has given rise to a new breed of entrepreneurs who have not acquired ‘old wealth’ but earned it.

These people, largely millennials, have risen above the middle-class median and prefer to live accordingly. Such demand is not swayed by market sentiments and warnings signals – it has its very own propulsion engine which does not run on regular fuel.

According to the Johannesburg-based New World Wealth report, the number of millionaires in India stood at 3,30,000 individuals in 2017. While this is just a tiny fraction of India’s total population, this number is expected to reach over 9,50,000 by 2027 – an increase of 190%.

Also, within the Asia-Pacific region, India has the fourth-largest population of millionaires, while in the Forbes list of the ‘World’s Billionaires’ for 2017, India accounts for an impressive 101.

These people don’t really care where the market is headed – what they want is as big a helping of a designer cake as they can afford to buy. So, while luxury housing is not rising spectacularly in the overall sweepstakes, it isn’t going away either. Quite to the contrary, in fact.

While affordable housing is undoubtedly the flavour of the season, luxury homes have not lost their lustre. ANAROCK data reveals a remarkable and unsuspected resilience in this segment:

Supply is picking up, albeit slowly: Data suggested a decline in luxury housing supply (homes priced over Rs. 1.5 crore) in 2017 over the preceding year. However, ANAROCK data reveals that in the first three quarters of 2018, this segment’s supply increased by almost 29% across the top 7 cities over the corresponding period in 2017.

MMR tops luxury supply: Of the total new supply in the luxury segment in 2018 (approx. 12,090 units), MMR saw maximum supply with the launch of nearly 6,310 new units, followed by NCR with nearly 2,650 units, and Hyderabad with 1,585 units. Surprisingly, Pune saw the least supply of luxury units with less than 100 units, followed by Kolkata with just 160 units. 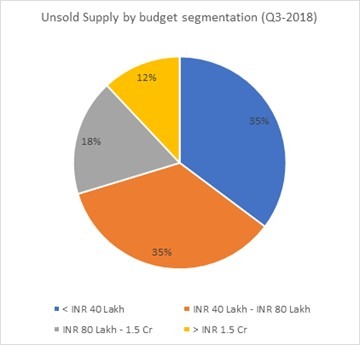 Unsold Inventory: Further, out of the total unsold stock as on Q3 2018 (approx. 6.87 lakh units) across the top 7 cities, luxury housing comprised just 12% of the total stock with 82,280 units. Of this, MMR has the maximum unsold luxury stock comprising 59%.

Thus, while luxury real estate has remained subdued since 2013, it is now picking up. Besides, the fact that HNIs went slower on buying coincides with their trademark trait of being vigilant managers of their own money, and highly risk-averse temperament.

Today’s ultra-rich typically prefer to live life king-size. From theme-based homes to smart homes to state-of-art amenities, the expectations of luxury buyers are growing constantly. Most look for experiential luxury, which is prompting developers to collaborate with branded designer labels like Armani and even international hotel chains.

Four Seasons Private Residences in Mumbai is a perfect example of such developments. The priority for most of these projects is to offer discreet luxury with a limited number of units per project.

While such residences come with a heavy price tag, they are fully managed and serviced. Other perks include a proper house-keeping team to manage these homes, room service facility and concierges, among other such enticements.

Given these trends and findings, it is definitely inappropriate to write off the luxury segment and its future business prospects. It does, after all, cater to the select few who will not and can afford not to compromise.

While most builders have followed the tide and shifted their focus almost entirely to affordable housing, a handful of them in each of the top cities continue to bet on luxury homes.

These established and well-capitalized builders across MMR, NCR, Pune and Bengaluru have understood that if the location, quality, craftsmanship and service standards of their luxury offerings are done right, they will succeed.

There will continue to be considerable demand for luxury housing from the ultra-rich and also non-resident Indians who have returned with full coffers to their country of origin.