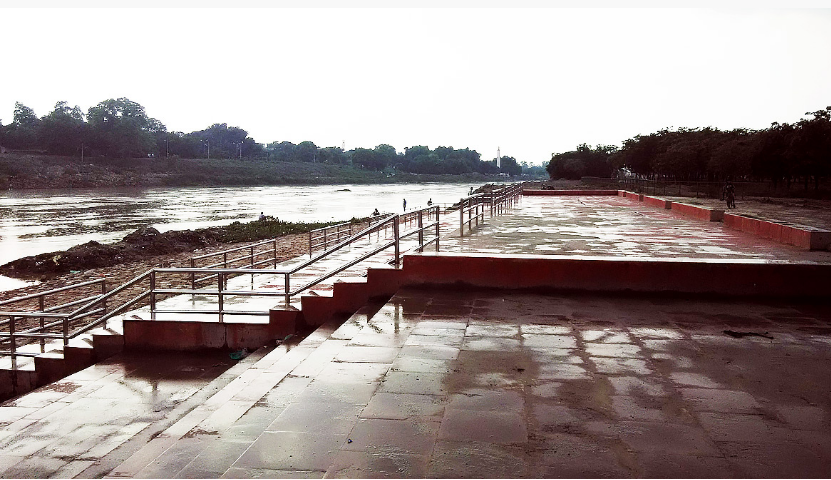 The recent caving of Gandhi Setu across the Gomti river during reclamation of riverside shows how dangerous it could be removing soil and sand from the river banks.

Some radical river regulation measures are being taken up by the Irrigation department of Uttar Pradesh government under Gomti Riverfront project.

They are largely civil related earthworks and channelisation schemes restricting the river flow to a channel through diaphragm walls that go sixteen meters inside the river bed on both banks.

The recent caving of Gandhi Setu across the Gomti river during reclamation of riverside shows how dangerous it could be removing soil and sand from the river banks.

The detailed project report was never shared with the public and design parameters are being changed routinely.

Now the State Cabinet has almost doubled the budget for development of Gomti Riverfront from the earlier Rs 656 crore to 1513.50 crore which would be spent on channelisation of the river, construction of intercepting drains and beautification of the riverfront on both sides in about 8 km stretch – from Harding Bridge to La Martiniere College.

The riverfront will be illuminated with musical fountains, water show, amphitheater, open air restaurants, walking and jogging track which will make the otherwise forgotten riverside and its floodplain attractive to citizens.

It is estimated that about 25,000-kilowatt hours of electricity would be required along with four electric substations, while there will be a dedicated river police station to tackle law and order situations.

There would also be several ‘selfie-points’ with river in the background for youngsters and senior citizens.

To a common citizen, this looks very fascinating, but the benefits of riverfront development overlook several environmental and geological wisdoms posing a serious threat to river ecosystems.

The maximum recorded discharge in the Gomti has been 1,25,890 cusecs in 1960, if this sort of flood happens in the future, even the retaining wall will not help in containing the flood water.

The bed shear stress will increase by 35% and the high flood level further by 1.5 meter. The top levels of the flood embankments are not adequate as the available free board is less than the required 1.5 m free board.

This could spell disaster for the residents both in upstream and downstream of the river.

In Gomti riverfront project, geo-morphological wisdom and flooding capabilities of Gomti have been completely ignored right from design stage with widespread loss of river habitat and floodplain integrity.

The ongoing efforts to facelift the river and its surroundings do not respect the fabrics of a sensible ecosystem design; instead, the idea behind this project is borrowed from the West.

Indian rivers are different – they carry a large amount of sediments and during monsoon, their flow increases manifolds. They require space to spread the surplus water and sediments load.

This is how vast aquifers underneath the Ganga plain came into existence. However, the deep concrete walls on both banks will not allow sediments to spread and they will also stop groundwater recharge.

When the Gomti enters Lucknow, it recharges the local aquifers. Making a deep concrete wall on both sides will definitely affect the recharge.

It will also destroy the natural resilience of river losing several critical river functions such as flood control, habitat protection, biodiversity, natural recharge and so on.

The main idea behind this massive project is cosmetic beautification. This ecologically fragile piece of land is for the river to store water and recharge the underground aquifers of Lucknow.

But, our longing for king size urban lifestyles with flashy riversides and ‘marine drive’ mentality undermines the very existence of a flourishing river which is the lifeline of millions.

Due to constant neglect, the first 55 km of the river is almost completely encroached, the tributaries are drying up, fish population is dwindling down and millions of untreated wastewater is pumped into it.

A large sewage treatment plant was made with huge amount of money in 2011, but it failed after running for less than a year. The agency, which built this STP, got away without any accountability.

If the government is really serious about the Gomti, it should take up a basin-wide project starting from the origin of the river. Several tributaries are drying, wetlands in bad shape, ponds filled up, natural drains have been converted into wastewater drains and fishes are disappearing.

However, the UP irrigation department seems to be in a war front mode instead of tackling the urgent basic but neglected aspects of river basin management and planning.

Projects like waterfront have large budgets often coming from hard earned public money or loan. What is the need of such ecologically devastating projects in the first place – we need more hospitals and schools than such avoidable cosmetic projects at the cost of a river’s health?

India needs Indian solution and not that are borrowed from the west. It is indeed necessary to consider our economic development models of moderation and probity that is ecologically sustainable and shuns conspicuous consumption.

Please spare our rivers from such projects – a ‘no project policy’ in such areas will do more good to our collective future. Best use of riversides could be river gardens with minimum disturbances to the ecosystems. 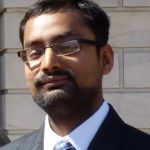 (Dr. Venkatesh Dutta is a river scientist and member of Riverkeeper Alliance and International Society for River Science. Views expressed are personal)