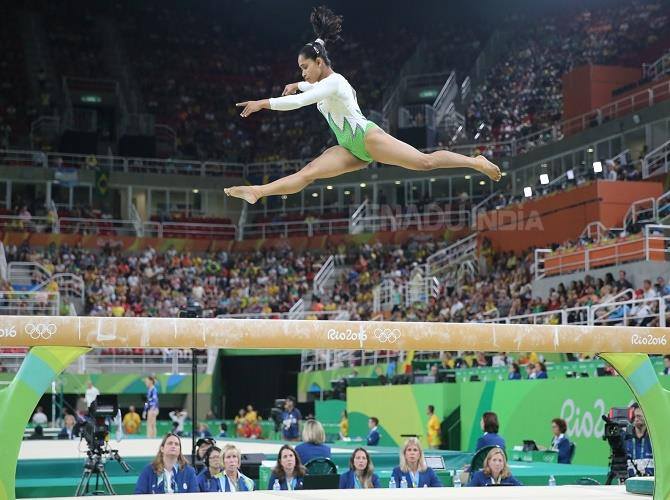 Karmakar became the first Indian woman and one of the five women in the world to successfully complete the handspring double front vault, also known as the Produnova Vault.

Dipa Karmakar on Monday (Aug 8) created history by becoming India’s first gymnast to qualify for the finals of Artistic Gymnastics at the Rio 2016 Olympics.

Her “Death Vault” made her score 14.850 to finish eighth in the qualification event of the Vaults.

The feat doesn’t end here. Karmakar became the first Indian woman and one of the five women in the world to successfully complete the handspring double front vault, also known as the Produnova Vault.

It is also known as the Death Vault as it is one the most dangerous vaults that makes an athlete vulnerable to life-threatening injuries, especially to the head and neck.

As Karmakar turned 23 on Tuesday (Aug 9), here are 10 interesting facts about the artistic gymnast:

1. Karmakar started her training in gymnastics under veteran Bisbeshwar Nandi at the age of six at her hometown Agartala in Tripura. Nandi has remained her coach since.

2. She had flat feet, that is, she suffered from a postural deformity that hindered the spring in her jump. She overcame the condition with hard work and determination.

She used to put in the extra shift to get the curve in her feet.

3. Karmakar was not interested in sports. It was because of her father Dulal Karmakar, who was a weightlifting coach at the Sports Authority of India (SAI), that she started training.

It was only after her victory at the 2007 National Championships that she fell in love with the game.

4. When she started training, neither did Karmakar had money nor equipment to support her. Her coach built a springboard for her using second-hand parts of a junked off scooter and piled up crash mats to make a vault.

5. Karmakar came into limelight post her bronze win in the 2014 Glasgow Commonwealth Games. She was the second Indian to win a medal after fellow gymnast Ashish Kumar.

6. Though she finished fifth, Karmakar was the first Indian to reach an apparatus final at the World Championships in 2015.

7. From 2007 till date, Karnakar has bagged 77 medals, including 67 gold, in state, national and international championships.

8. At the age of 14, she won the Junior Nationals in Jalpaiguri district of West Bengal.

9. Karmakar was presented the Arjuna Award by the Government of India in 2015.

10. Her coach claims that Karmakar is short tempered.

“Desire, hunger to do well in gymnastics. Dipa has that. She told me once ‘Whatever you want me to do, I will not say no to you coach’, and except when she loses her temper with me, she has kept her word,” Bisbeshwar Nandi told Firstpost.