Since women are not generally allowed to wrestle in the conservative state of Haryana, Malik used to train and fight matches with boys in the “akhara”.

On Day 12 of the world’s biggest sporting event, India’s medal jinx at Rio Olympics 2016 was broken by Sakshi Malik, who got a bronze medal in women’s freestyle 58-kg wrestling.

On Wednesday (Aug 17), Malik beat her Kyrgyzstan counterpart Aisuluu Tynybekova by 8-5, making a magical comeback in the second half.

Post her win, Prime Minister Narendra Modi tweeted: “On this very auspicious day of Raksha Bandhan, Sakshi Malik, a daughter of India, wins a Bronze & makes all of us very proud.#Rio2016”.

President Pranab Mukherjee also congratulated her and posted: “Hearty Congratulations to #SakshiMalik for winning a medal in women’s wrestling in #Rio2016 and doing India proud #PresidentMukherjee”.

Indian sport shooter.Heena Sidhu was also full of praises for Malik and said: “What an elation in the middle of the night!! Difficult to sleep with so much adrenaline in my system after a nail biting match #SakshiMalik”.

While the country continues to cheer for Malik, here are 10 facts about the 23-year-old wrestling star:

1. With her bronze, Malik is the fourth Indian wrestler to win a medal in the Olympic Games after Khashaba Dadasaheb Jadhav (1952), Sushil Kumar (2008, 2012) and Yogeshwar Dutt (2012). She is the first female wrestler of the country to win an Olympic medal.

2. Malik was born on Sept 3, 1992 at Mokhra village near Rohtak district of Haryana, a state infamous for its male-female child sex ratio. Chief Minister Manohar Lal Khattar recently revealed that there are 903 girls per 1,000 boys in the state.

3. She started her training in wrestling at the age of 12 (2004) at Sir Chotu Ram Stadium Wrestling Academy in Rohtak under coach Ishwar Singh Dahiya.

4. Incidentally, since women are not generally allowed to wrestle in the conservative state of Haryana, Malik used to train and fight matches with boys in the “akhara” (training ground for wrestling).

5. It was her mother Sudesh Malik who brought her into the sport. Her father Sukhbir Malik was also supportive of her wrestling, and faced locals who protested against their daughter. 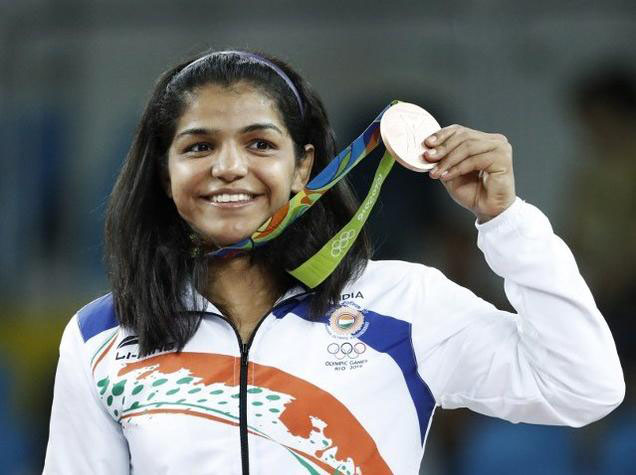 Sakshi Malik poses before the camera after winning bronze medal in Womens 58 kg category, at the Rio Olympic Games-2016, Brazil on August 18, 2016.

7. In 2014, she beat American wrestler Jennifer Page at the Dave Schultz International Wrestling Tournament and won the gold in 60 kg category.

8. The same year, she won silver for India at the Commonwealth Games in Glasgow, Scotland. She was defeated by Nigerian wrestler Aminat Adeniyi (0-4).

9. In 2015, Malik grabbed the bronze at Senior Asian Wrestling Championships in Doha in the 60-kg category.

10. Her Olympic medal has also got her Rs. 2 crore from the Government of Haryana, along with a state land grant; Rs. 50 lakh from the Indian Railways as its employee; Rs. 20 lakh from the Indian Olympic Association; Rs.15 lakh from the JSH Group and Rs. 1.01 lakh from Bollywood actor Salman Khan, who is also the goodwill ambassador of the Indian contingent for Rio 2016.
(Sources: The Huffington Post India, Firstpost, Wikipedia, Jagruk Bharat newspaper)