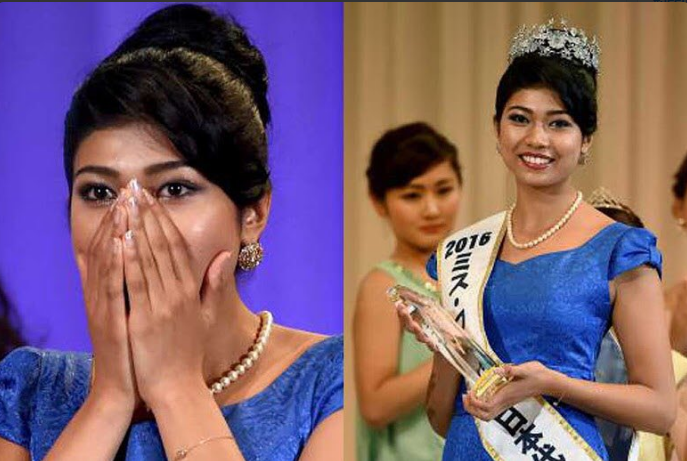 The 22-year-old born to Indian father and Japanese mother was all teary as her name was declared as the winner.

Half-Indian Priyanka Yoshikawa was crowned Miss Japan on Sept 6 amid criticisms from purists for presenting the prestigious title to a “haafu” (half-Japanese).

The 22-year-old born to Indian father and Japanese mother was all teary as her name was declared as the winner.

“We are Japanese. Yes, I’m half Indian and people are asking me about my ‘purity’—yes, my dad is Indian and I’m proud of it, I’m proud that I have Indian in me. But that does not mean I’m not Japanese.,” Priyanka said in an interview published in Japan Today.

Here are 10 things that you might want to know about her:

2. Her father Arun Ghosh left Kolkata to settle in Japan in 1985.

3. Her mother Naoko was a teacher in Tokyo.

5. Priyanka has also been trained in kick-boxing.

6. Born in Tokyo, Priyanka alleged that she has always faced racial discrimination since her childhood. In an interview that appeared in Japan Today, she said: “I know a lot of people who are ‘haafu’ and suffer…When I’m abroad, people never ask me what mix I am.”

7. She wants to promote more inclusiveness in Japan. “As Miss Japan, hopefully I can help change perceptions so that it can be the same here too. The number of people with mixed race is only going to increase, so people have to accept it,” she told in an interview published in Japan Today.

8. She is the second “haafu” to win the title after Ariana Miyamoto became the first black woman to be crowned Miss Universe Japan in 2015.

9. She speaks English as fluently as Japanese.

10. Priyanka will be representing Japan at the Miss World beauty pageant to be held in Washington this December.