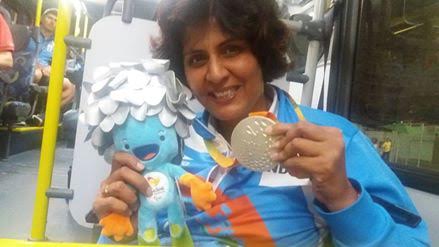 Bagging a silver in women’s shot put at Rio 2016 Paralympics on September 12, Haryana girl Deepa Malik became the first Indian woman to win a medal at the international multi-sport event.

Bagging a silver in women’s shot put at Rio 2016 Paralympics on September 12, Haryana girl Deepa Malik became the first Indian woman to win a medal at the international multi-sport event.

Haryana Chief Minister Manohar Lal congratulated her and said in a statement: “I extend my heartiest congratulations to Deepa Malik who made history at Rio and won silver medal. The daughter of Haryana has done the state and the country proud.”

“If it was Sakshi Malik, who brought the country first medal in wrestling in Olympics, Deepa has become the first woman athlete from India to win a medal in Paralympics.

‘Our daughters are bringing laurels and we are proud of them”, the CM said, adding that Deepa will be awarded Rs 4 cr for her achievement.

Meanwhile, Deepa posted on her official Facebook account: “My heartfelt gratitude for all your best wishes and greetings. Thank you for celebrating the Medal at Rio Paralympics.”

Here are 10 facts about Sonipat-born, 45-year-old Deepa Malik that you might want to know:

1. It was in 1999 that Deepa was detected with a spinal tumour. She was operated thrice and ended up with 183 stitches between her shoulder blades. 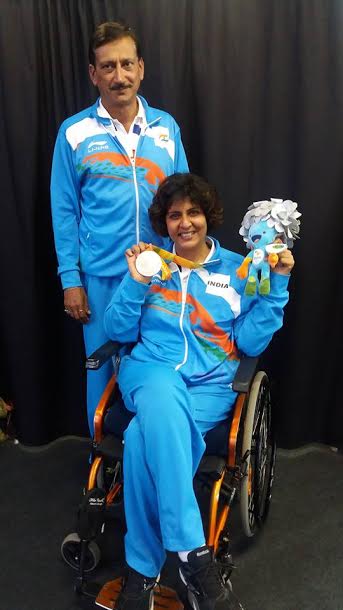 But in spite of all the efforts, she became paraplegic (paralysed from the waist down) and got confined to a wheelchair.

2. Both her father and husband served the Indian Army. Her father was Infantry Colonel BK Nagpal and husband was cavalier Colonel Bikram Singh Malik, who had fought the Kargil War.

3. She has two daughters – Devika and Ambika.

4. Deepa is an avid biker. She chose not to spend here life behind closed doors and joined the Himalayan Motorsports Association (H.M.A.) and Federation of Motor Sports Clubs of India (F.M.S.C.I.).

5. In her customized quad bike, she participated in world’s highest rally raid – Raid De Himalaya – and travelled 1,700 km in eight days in sub-zero temperatures at an altitude of 18,000 feet in 2009.

6. She also loves swimming and has won many awards at international competitions. In 2012, she was even given the Arjuna Award for her performance in swimming.

8. Her love for sports have put her name in the Limca Book of Records, not once, but four times. In 2008, she made records by swimming across a 1-km stretch of the Yamuna river against the current.

In 2009, her name was featured in the Records’ book for biking across 58 km. In 2011, in nine days, she drove across nine high altitude passes on Ladakh’s highest motorable roads.

9. Deepa had shifted to Gurgaon from Ahmednagar and lived there alone, away from her family, to prepare for Rio 2016. She used to practice four times a week, while pursued her biking adventures in the weekends.

10. In 2003, she started a restaurant with under-privileged children to help them with their education and finances.