In just around 150 pages, Chaturvedi gives a vivid account of who are the persons behind the handles, who give them instructions, and how they function. 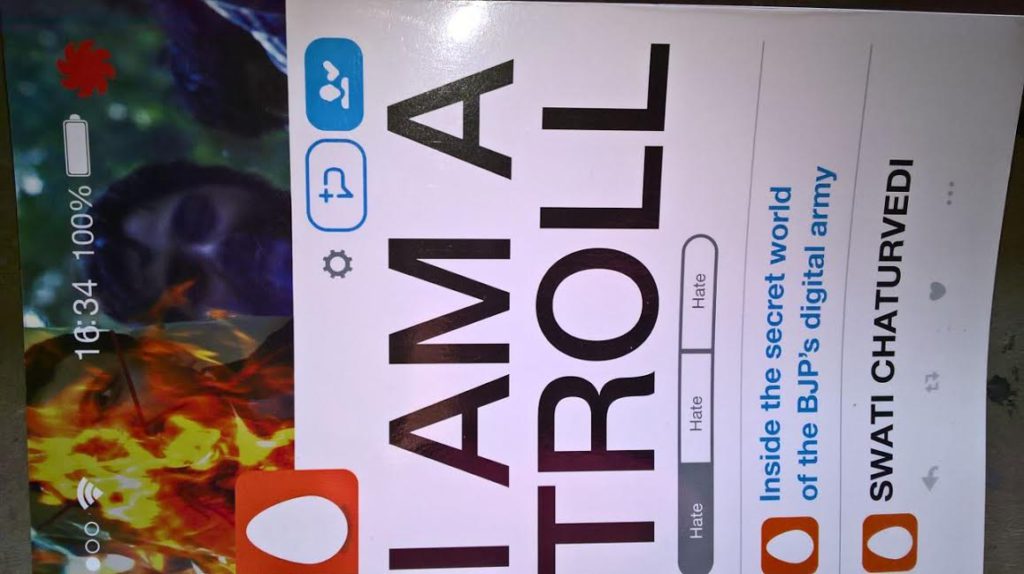 Since Narendra Modi-led NDA government rode to power at the Centre in 2014, one thing has been on top of all controversies – the organised army of right-wing digital trolls.

These warriors, now commonly known as trolls, have been at war 24×7 with political opponents, academics, writers, journalists and anyone remotely opposed to Modi’s idea of India.

Whatever the issue, a comment critical of Modi or BJP is enough to draw a horde of stinging counter-comments, full of abuses and expletives. In the case of women, the counter-comments may come in the form of sexually provocative messages, pictures, videos and even threat of rape.

On June 10 2015, journalist Swati Chaturvedi filed a police complaint at the Vasant Vihar police station in south Delhi against an anonymous twitter handle @lutyeninsider that had consistently abused her on twitter.

The complaint was reportedly the first of its kind in India filed by a journalist, that too woman, under sections of IPC dealing with stalking, sexual harassment, transmitting obscene material over the Internet and outraging the modesty of a woman.

On its part, Twitter suspended the handle following widespread media debate over the complaint.

However, Delhi Police failed to arrest the anonymous person behind the handle despite having his IP address and email address apparently because he was having strong political connections.

But the incident made Chaturvedi go deep into the mysterious world of such handles who viciously troll prominent personalities who take a critical view of the present dispensation at the Centre, especially Prime Minister Narendra Modi.

The investigation that took two years led to the creation of the book, I Am a Troll.

In just around 150 pages, Chaturvedi gives a vivid account of who are the persons behind the handles, who give them instructions, and how they function and organise attacks on prominent people on social media.

“The anonymous swarm tweet extremely explicit messages to women, sending images of pubic hair along with vulgar messages. The more famous the victim, the worse the abuse is.

Well-known TV journalists like Barkha Dutt and Rajdeep Sardesai are among the most targeted by this group,” Chaturvedi writes in the introduction to the book.

Indeed, BJP ushered in effective campaign on social media to sway public opinion in its favour before 2014 general elections. The party methodically and meticulously churned out campaigns on digital platforms against the Congress, which could not fathom the power of digital world at that time.

But once the elections were over, the digital army turned their guns against those whose views on nationalism, religion, intolerance, surgical strike or demonetisation did not match those of the BJP.

The book cites one incident where trolls force e-commerce company Snapdeal to snap its ties with actor Aamir Khan for his “anti-national” comment.

Khan was treated so badly by the twitter swarms that one of the self proclaimed digital warriors, Sadhavi Khosla, felt that the trolls have turned uglier by the day unnecessarily vilifying innocents, and quit the BJP’s digital army.

Chaturvedi has interviewed some of those behind anonymous twitter handles that trolled her. She also chronicles the story of Khosla, who had given up her career in US to be an IT volunteer of BJP before the general election.

The book claims that Prime Minister Modi follows many of the twitter handles, which abuse others and spew hate day and night, but maintains a stoic silence.

The allegations may not be totally unfounded considering that the PM had invited many people behind such handles to his official residence in July 2015 for an event.

Some of them proudly keep their photographs with Modi at that event as display pictures on their twitter handles.

Rs.250 but available online at a discounted price of Rs.60