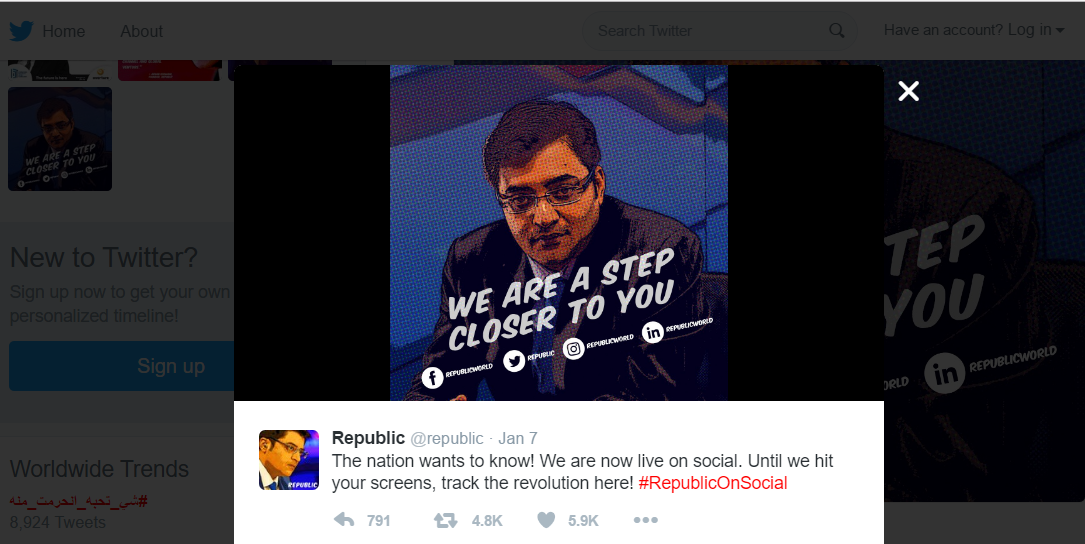 Republic has launched a coming soon website www.republicworld.com. The domain for the website was booked nearly seven years ago. Soon after quitting as editor in chief of Times Now in October last year, renowned journalist and broadcaster Arnab Goswami announced that he would launch a new media venture. Two months later, Goswami came up with its name – Republic.

Goswami, who anchored two popular programmes – The News Hour and Frankly Speaking with Arnab – on Times Now, has a huge fan following.

The viewers are looking forward to his new venture, though many are not aware of the details of the organisations and people backing the project.

Here are five things you would like to know about Goswami’s next project:

1. When Arnab Goswami quit Times Now, he said in his farewell speech:

“The game has just begun. Thank you guys, from the bottom of my heart, thank you. I have enjoyed a lot here and I hope you too enjoyed having me here. But what I want to say is, that the game starts now. Don’t ever lose faith in the independent media. Nobody can teach us independent media. It has come and will happen…”

2. Less than two months later, he announced the name of his new channel, Republic, to be launched before Uttar Pradesh elections.

Bangalore-based website The News Minute that had earlier broken the news of his exit from Times Now said Goswami’s new media venture would be headquartered at Mumbai.

Another website www.newscrunch.in speculated that Rajya Sabha MP and Bangalore-based media baron owner Rajeev Chandrasekhar would back the new venture.

Chandrasekhar is an Independent MP but has the affinity towards BJP. However, it was not clear who are the promoters of Republic.

3. On January 7, Republic made its social media debut. The first tweet from the Twitter handle @republic said: “We are on the brink of shaking up the system all over again. Join the @Republic movement. #RepublicOnSocial.

It was followed by several other tweets, attracting 55,000 followers within 24 hours. The Facebook page with its profile having the image of Arnab Goswami has garnered over 12,000 likes.

4. Republic has launched a coming soon website www.republicworld.com. The domain for the website was booked nearly seven years ago.

5. Republic has also launched an official page on Linkedin named as Republic World with Arnab’s picture as its profile picture. It has 611 followers as on January 8.