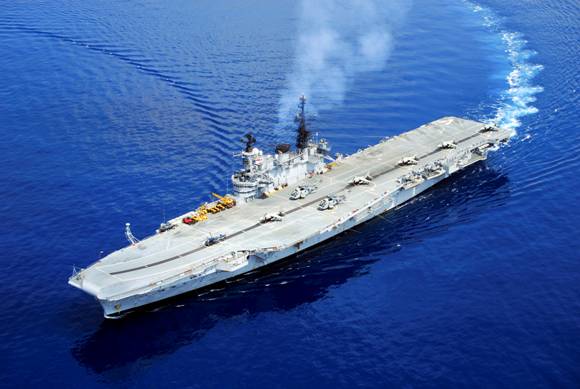 INS Viraat is not only the oldest aircraft carrier in service but also the last ship built by the British to serve the Indian Navy.

India’s oldest iconic warship INS Viraat might be sold for scrap after it retires on March 6 after 30 years of service.

Here are a few facts you need to know about INS Viraat:

1. INS Viraat, a Centaur-class aircraft carrier, was the flagship of the Indian Navy.

2. INS Viraat is not only the oldest aircraft carrier in service in the world, but also the last ship built by the British to serve the Indian Navy.

5. The 27,800-tonne carrier has a 14° ski jump to operate the Sea Harrier, a reinforced flight deck, and 1.2 inches (3 cm) of armour over the magazines (magazine capacity=minimum 80 lightweight torpedoes) and machinery spaces.

7. During war, she has the capacity to carry 26 combat aircraft. She supports amphibious warfare and Anti-Submarine Warfare (ASW) operations.

8. INS Viraat went out of service in September 1993 after her engine room got flooded. She resumed service in 1995.

9. In order to get her service life extended, INS Viraat underwent several upgrades. Some of the refits took place between July 1999 and April 2001; January and August 2009, July 2011, November 2012 and August–September 2015.————————–—————-
You may like to read
10 simple tips to choose the right hotel
10 facts to know about AAP leader Kumar Vishwas
New Tata boss faces huge challenge to restore glory
Rules for hoisting Indian national flag
Why we should track Union Budget for FY18
Everything you want to know about Sudarsan Pattnaik
————————————————

10. In 2013, INS Vikramaditya, a modified Kiev-class aircraft carrier, was commissioned into the Indian Navy. It was then the Indian Navy requested the Ministry of Defence to clear the decommissioning of INS Viraat in view of her age and rising maintenance cost.

11. In February 2015, the Indian Navy began the process of decommissioning the vessel the next year.

12. On February 8, 2016, Andhra Pradesh Chief Minister Chandrababu Naidu said instead of selling her as scrap, the state government wants to convert 13-storey high INS Viraat into a museum ship.

The cost to be incurred in the process was estimated at Rs 1,000 crore. Since then, the tussle between the Andhra Pradesh government and the Centre over sharing the budget has left the plan in a fix.

13. The carrier will now be finally decommissioned in Mumbai on March 6 where the Indian Navy has planned her grand farewell.