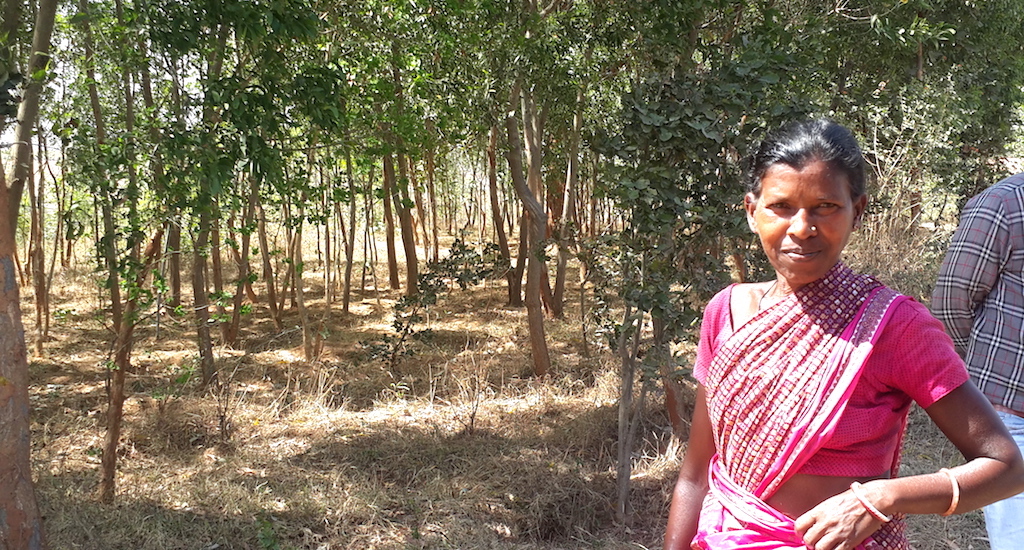 The villagers have raised a thriving forest over 365 acres of wasteland without any intervention from the state or civil society. 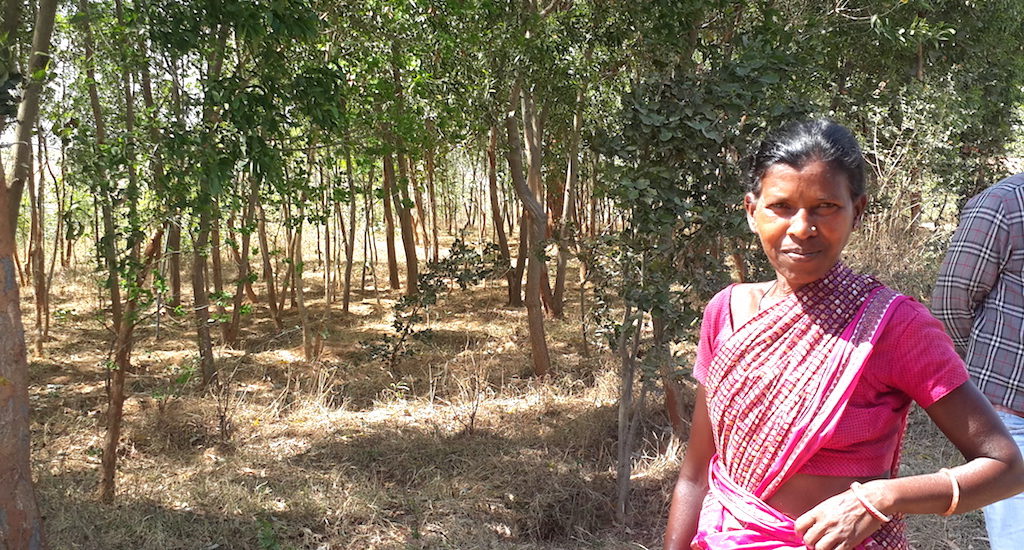 Villager Agni Devi at a papaya garden that is a part of the Hesatu forest. (Photo by Chhandosree)

There are many instances of communities coming together for a common cause but such action is usually catalyzed by government schemes or interventions initiated by non-governmental organizations.

In a state that derives its name from forests but where tree felling is rampant, 93 households of Hesatu have shown how to create a sustainable economy from ecology by raising a forest of over 100,000 trees on what used to be 365 acres of wasteland barely six years ago.

Spread across a 3km radius, this village of 800 people had large acres of land lying fallow, but till 2010, villagers who owned them did not know what to do with it. The situation is much different in 2017.

“The annual income through our agro-forestry initiative is between Rs 40 to Rs 50 lakh. That is what we had been earning for last few years,” resident Shivnath Pahan told VillageSquare.in.

Villagers are, however, quick to stress that achieving this wasn’t easy. Like Rome, Hesatu forests weren’t built in a day.

Recalling how their project forest began, villager Devendra Nath Thakur, one of those deeply involved in the project, said: “In 2010, we had been sharing our worries over the chunks of wastelands at a gram sabha (village meeting) and someone said, why don’t we have forests of our own?

The idea caught on. Suddenly, the meeting, which was about a problem, became all about solutions. Around 25 to 30 young villagers prepared the draft of what you are seeing as a forest today.”

A lot of homegrown science was at work. Thakur said they had planted trees at a distance of 8 feet from each other. Every tree has a 1.5 feet radius trench around it.

Ginger and turmeric shrubs are planted around the trench, with tubers underneath. “Three levels of plantation, three sources of income,” Thakur told VillageSquare.in.

How did they manage to think of this on land that used to lie fallow?

“We are farmers. Nature is our mother. We know the land as well, as a mother, knows her child. We knew that it would require some preparation but our efforts would yield fruit. That’s what gave us the courage to start agro-forestry in three tiers,” said Thakur’s friend Jagnu Oraon.
Three-tier business model

“If there’s a three-tier model of forest produce, there must be a three-tier business model, right?” Oraon said. “Our first level of income is through the selling of produce, second through training others on our innovative practices and third through the sale of dry logs.”

On their income development pattern, Thakur said: “Thirty percent goes to land development, 30% goes to the community, 30% to feed people who toil in the forests round the year and 10% on welfare.”

This apart, villagers have started an open school of training. “We charge Rs 100 per day per person to learn how we work. We spend Rs 90 to feed him. Our training charge is Rs 10,” said Pahan.

The latest addition to the earning is through dairy due to the forest. “The 2016 monsoon was a boon for us. We earned around Rs 4 lakh by selling grass and bought around 70 cows.

Now the villagers are earning Rs 5,000 per day by selling milk. And last year’s income through forestry was around Rs 40 lakh,” said Thakur.

The beginning was auspicious. “We started our work six years ago in Holi. We dug the earth, ploughed it and planted vegetables the first year. With profits from vegetables, we started working on the bigger project — that of growing trees.

We were already cultivating lac on kusum (Schleichera oleosa) and ber (Ziziphus mauritiana) trees on 200 acres. We added the numbers on the community forest of 365 acres,” Oraon said.

Creating their own luck

Mahavir Mahto, another farmer associated with the project, said, “Smaller plots here and there are for vegetables. So, we are maintaining a community forest and a kitchen garden.”

Alijaan Ansari, another villager, said they created their own luck. “We have a perennial river nearby, the Domba. But, earlier, it dried up in summer. Now, the river stays full round the year.” 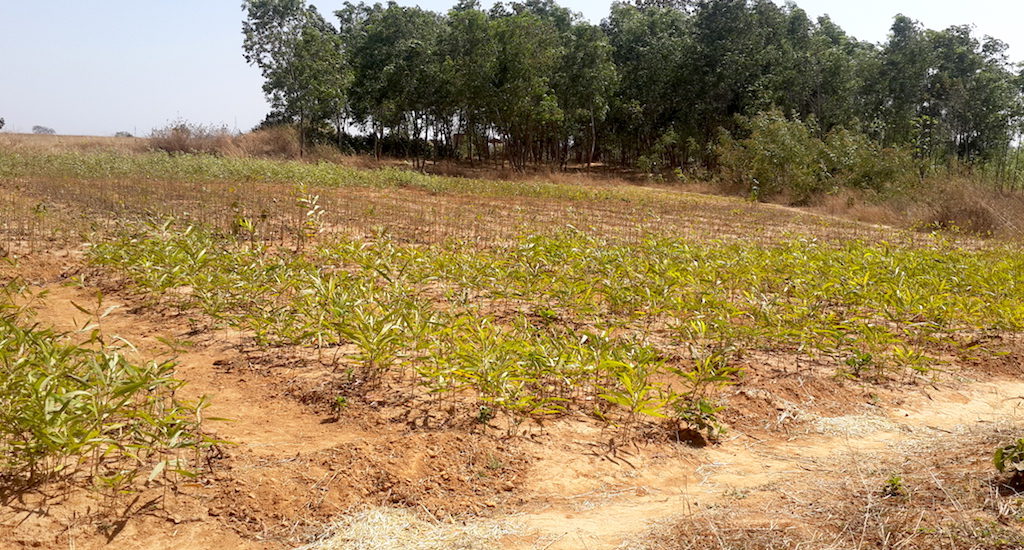 A nursery adjacent to the Hesatu forest from which villagers expect to sell saplings. (Photo by Chhandosree)

In just six years, it is unbelievable that so much of the good work has been done without any government or NGO intervention. “Keep us away from government and NGOs,” a villager laughed, not wanting to come on a quote for his candor.

“Years will pass without any good work if these two are involved. The government will waste days in passing files. NGOs can’t move an inch without stakeholders meetings and documentation. We are doing well on our own,” he added with a grin.

But, isn’t government and NGO help needed to protect valuable assets such as timber? The Hesatu team said no. “Every tree is counted and marked as you can see. Plus, here is a canal between the forest and road that neither animals nor trucks can cross,” Oraon explained.

What brings additional satisfaction to the villagers is that seasonal migration has been stopped. “Till 2012-13, around 200 people used to leave the village to work as daily wagers in other cities.

In 2014, when we realized that we have started making profits through forestry, we counseled the family members of the migrated people to stop them from going anywhere and work here instead.

In the years 2015 and 2016, the rate of migration was lower. And in 2017 we can safely claim that our village is migration-free,” said Sunita Devi, a villager, and active plant grower.

We would continue to grow more trees till someone comes and says we can’t grow trees in other places. But believe me, seeing the greenery around, people will appreciate rather than stopping us,” said Pahan.

The villagers echoed something environmentalists across the globe keep reiterating. “The cool breeze and chirping birds remind us that saving greenery is the only way to save mankind,” Thakur said. The farmer then looked around in satisfaction.

“Our children too are lucky. While helping us plant trees, they learn math through measurements, colors through flowers, fruits, and vegetables. Above all, they love mother earth because each tree is like their sibling.

*Chhandosree is a journalist based in Ranchi.