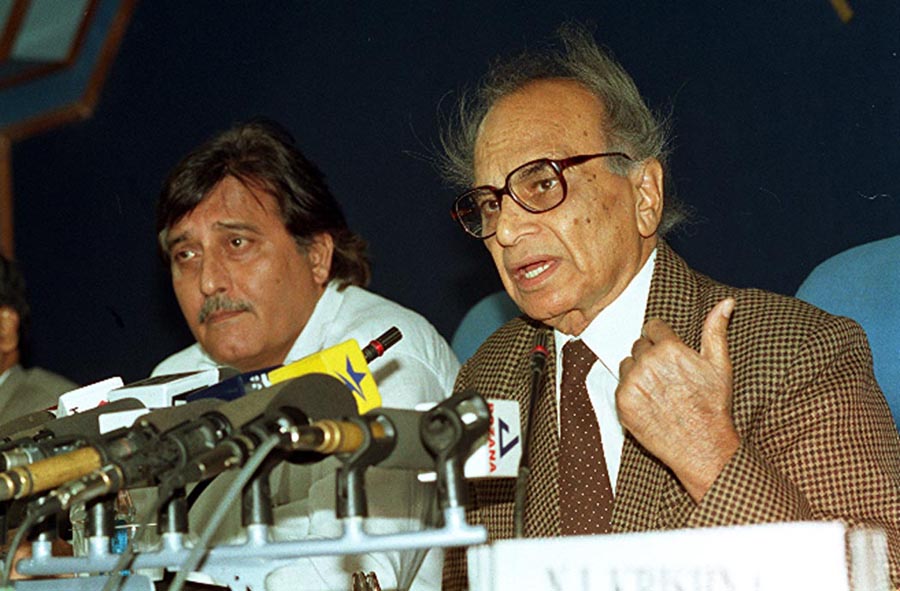 A PIB pic of Vinod Khanna  with Jagmohan at a Press Conference in New Delhi on October 23, 2002 .

A photo of a frail and ailing Vinod Khanna, who ruled Hindi film industry as its leading man in 1960s and 1970s, went viral on social media on Thursday (April 6), sparking rumours of him suffering from cancer.

However, his son and actor Rahul Khanna denied the rumours and said Vinod Khanna was admitted to Sir H.N. Reliance Foundation Hospital and Research Centre in Girgaon, Mumbai, on March 31 night due to severe dehydration.

Rahul Khanna further said that his father is stable now and that doctors might discharge him any day soon.

While we pray for Vinod Khanna’s speedy recovery, here are 10 facts that fans would like to know about him:

1. Vinod Khanna had no filmy background. His father Kishanchand Khanna ran a business in textiles, dyes and chemicals. Vinod Khanna himself is a commerce graduate from Sydenham College, Delhi.

2. Considered as one of the most good-looking heroes of his time, Vinod Khanna started his Bollywood career as a villain in Sunil Dutt’s “Man Ka Meet” (1969).

3. After playing negative roles in a number of films including “Purab Aur Paschim”, “Sachaa Jhutha”, “Aan Milo Sajna”, “Mastana”, “Mera Gaon Mera Desh” and “Elaan”, Vinod Khanna finally got his break as a hero in “Hum Tum Aur Woh” in 1971.

5. Vinod Khanna was probably the first Bollywood hero who took temporary retirement from the industry when he was still at the peak of his career.

He became a disciple of Osho (Bhagwan Shree Rajneesh) in 1975 and in the earky 1980s, he shifted to Rajneeshpuram in the US, where he spent his time cleaning dishes and working as Osho’s gardener.

6.Khanna’s absence from his family resulted in his divorce with his first wife Geetanjali in 1985. The couple have two sons – Rahul Khanna and Akshaye Khanna.

8. Vinod joined the Bharatiya Janata Party (BJP) in 1997 and won from Gurdaspur constituency in Punjab the next year.