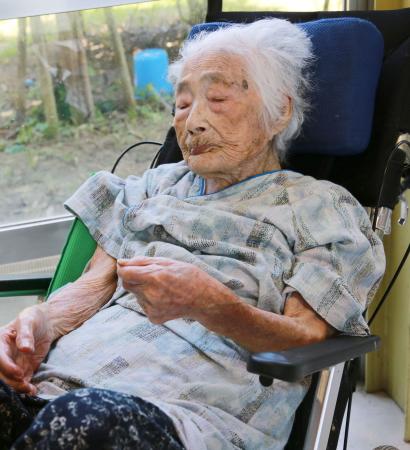 World’s oldest person Nabi Tajima died in Japan at the age of 117.

She died of old age at a local hospital in Kikai town of southern Japan on Saturday evening (Apr 21), town official Susumu Yoshiyuki confirmed to media.

2. According to available data, till her death on Apr 21, Tajima was the oldest recorded Japanese and Asian person in history.

3. With her life of 117 years, 260 days, Nabi Tajima was the world’s third oldest person ever to be validated by modern standards. French supercentenarian Jeanne Louise Calment topped the list with a lifespan of 122 years, 164 days, followed by American supercentenarian Sarah DeRemer Knauss. who lived for 119 years, 97 days.

4. With Nabi Tajima’s death, the world lost its last person born in the 19th century.

5. Tajima’s husband Tominishi Tajima died at the age of 95.

6. She had nine children, including seven sons and two daughters.

7. As per the latest data dating September 2017, Nabi Tajima had around 160 descendants, including great-great-great-grandchildren.

8. It was seven months ago that Nabi Tajima officially became the world’s oldest person after Jamaican supercentenarian Violet Brown passed away at the age of 117 years, 189 days on Sept 15, 2017.

9. A video was broadcast on Japan television channels where Nabi Tajima was seen moving her hands to traditional Japanese music at a ceremony marking her achievement.

10. When asked what’s the secret of her longevity by various media, Tajima always said the credit of her long life goes to sound sleep and delicious food.