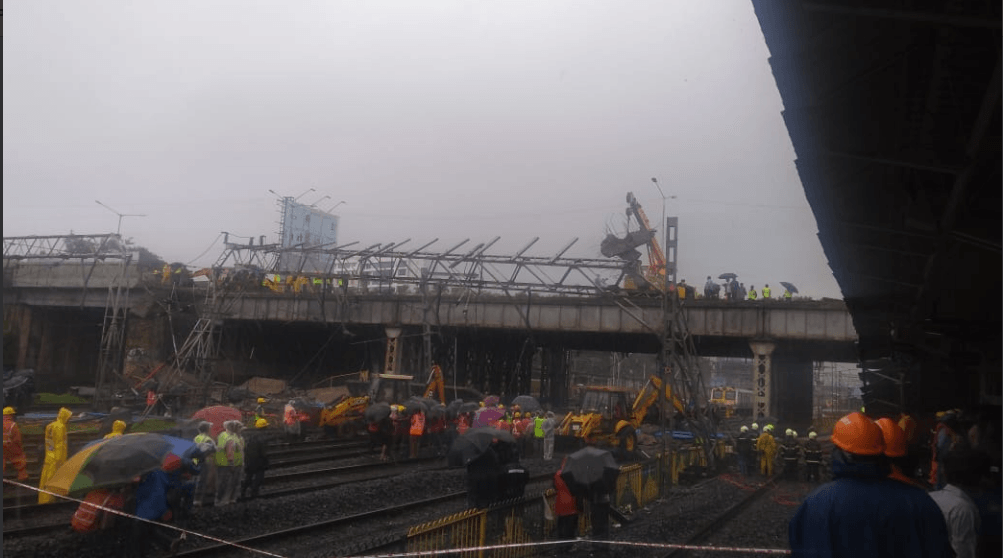 Heavy rains led to collapse of part of a bridge at Andheri (West) station in Mumbai on Tuesday (July 3) morning, injuring at least 5 people.

Here is everything you need to know about the

1. Around 7.30 am on Tuesday, part of the Gokhale bridge on SV Road that connects Andheri East and Andheri West stations collapsed, tearing down overhead wires which fell on the tracks, affecting train service, which is the lifeline of India’s financial capital.

2. The incident occurred at the southern end of Andheri station between platform numbers 7 and 8.

3. The Mumbai Police has confirmed there has been no casualty. But at least 5 people were injured in the accident, two of them are said to be critical.

4. After the incident, the Mumbai Police tweeted: “Part of Gokhale Bridge, connecting Andheri East to West has collapsed affecting the overhead wires too.Trains on the western line are affected. BMC,Fire Brigade as well as RPF Staff & Officers are deputed on spot for support.Traffic above & below the bridge is stopped for now.”

5. Commuters travelling from Andheri East to Andheri West were advised to follow the following route:

6. Commuters travelling from Andheri West to Andheri East have been advised to follow the following route:

7. Commuters travelling from SV Road to Western Express Highway (WEH) or from WEH to SV Road are advised to take the Gore flyover/Khira Nagar junction-Milan flyover/ Khar subway to reach their destination.

8. The Western Railway (WR) had issued an advisory in the morning requesting commuters to travel only if necessary till restoration work was completed.

“Restoration of OHE (Overhead Equipment) & tracks bet Andheri & Vile Parle which is affected due to falling of part of ROB is underway. Trains are working bet Virar – Goregaon & Bandra-Churchgate but It is advised to travel only if its very necessary to avoid inconvenience please,” the Western Railway tweeted.

“Limited services being run between Borivali-Goregaon. However, 18 extra buses have been arranged from Borivali for south Mumbai. More extra buses being arranged.Trains working bet Virar-Borivali,” it said.

10. Meanwhile, Railway Minister Piyush Goyal said he is monitoring the situation in Mumbai.

“Directed officials to speed up repair work and rapidly restore traffic in close coordination with other departments. I have also ordered an enquiry by Commissioner of Rail Safety,” he tweeted.

“Railways is working to reinstate all remaining railway sections too,” said the Railway Minister.

12. The WR Helpline numbers are as follows:

14. The Western Railway expects to restore all lines by midnight.

15. Meanwhile, the India Meteorological Department (IMD) has predicted heavy rainfall in Mumbai for the next 48 hours.