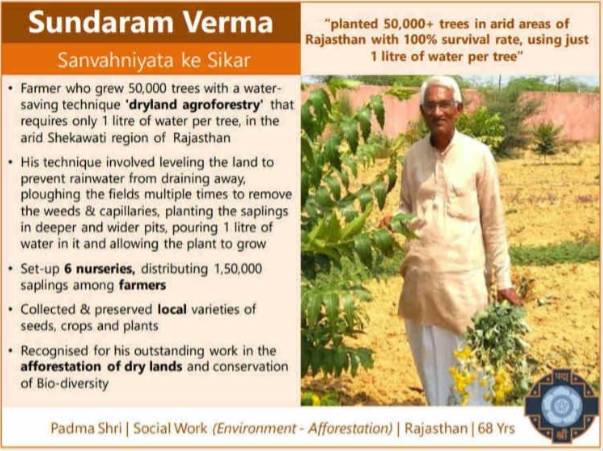 The Ministry of Jal Shakti, Government of India has launched the Jal Shakti Abhiyan (JSA) to revive India back to a sustained system of water conservation and efficient irrigation.

Jal Shakti Abhiyan (JSA) was a time bound campaign with a mission mode approach intended to improve conditions in around 1500 Blocks that
are drought affected, water stressed or over-exploited falling in 254 Districts with water conservation related central programmes.

23 of these districts are aspirational districts.

For States/UTs with retreating monsoon namely Andhra Pradesh, Tamilnadu, Karnataka, and Puducherry, the campaign was to be carried out between October 2 and November 30, 2019.

During the campaign, senior officers, groundwater experts and scientists from the Government of India were to work together with State and District officials in India’s most water-stressed districts.

JSA aims at making water conservation and promotion of irrigation efficiency a Jan- Andolan through asset creation and communication campaigns.

Sikar district in Rajasthan has a total of 9 blocks, out of which 8 blocks fall in ‘over exploited’ category and have been included in the JSA.

This District was chosen by the author for the study of implementation of JSA as part of M Phil requirements, owing to proximity to Delhi and convenience.

As part of the study, a field visit was planned to the affected Blocks in Sep 2019 for on ground assessment of the work carried out as part of the JSA.

The field visit was planned to coincide with the visit of the Central Nodal Team to Sikar. 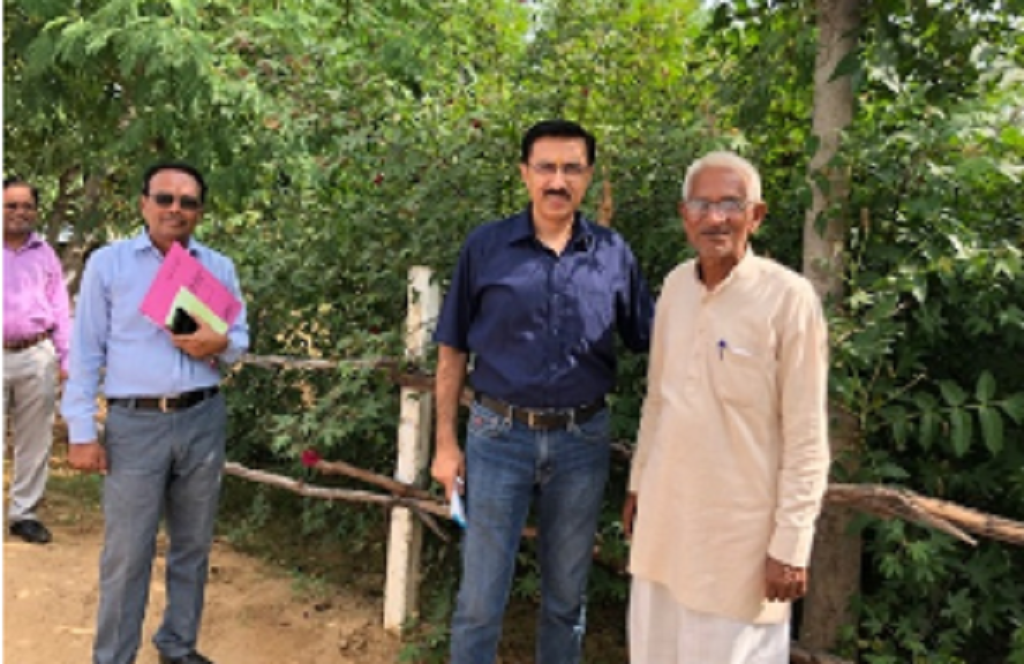 On the first day of the visit, the Block level nodal officer introduced me to a unique farmer in the Dantaramgarh Block.

It sounds impossible to grow the sapling of a tree with just one litre water in scorching heat and extremely dry soil in Rajasthan.

But it is the innovation by a progressive farmer Mr. Sundaram Verma which has made this possible.

He analysed every small aspect of growing the sapling meticulously for years, and come up with this solution of using minimum water in transplanting the sapling in the farmland.

He explained that rainwater absorbed in the soil is crucial in farming but it is lost due to two reasons, one evapo-transpiration through weeds and secondly upward movement of water due to capillary action of soil.

These are the major causes of water loss from the soil. Soil can hold back sufficient water if these losses are prevented.

The method promotes water use efficiency and maximises production and is called ‘Dryland Agroforestry’ or ‘one litre water per tree’ method. 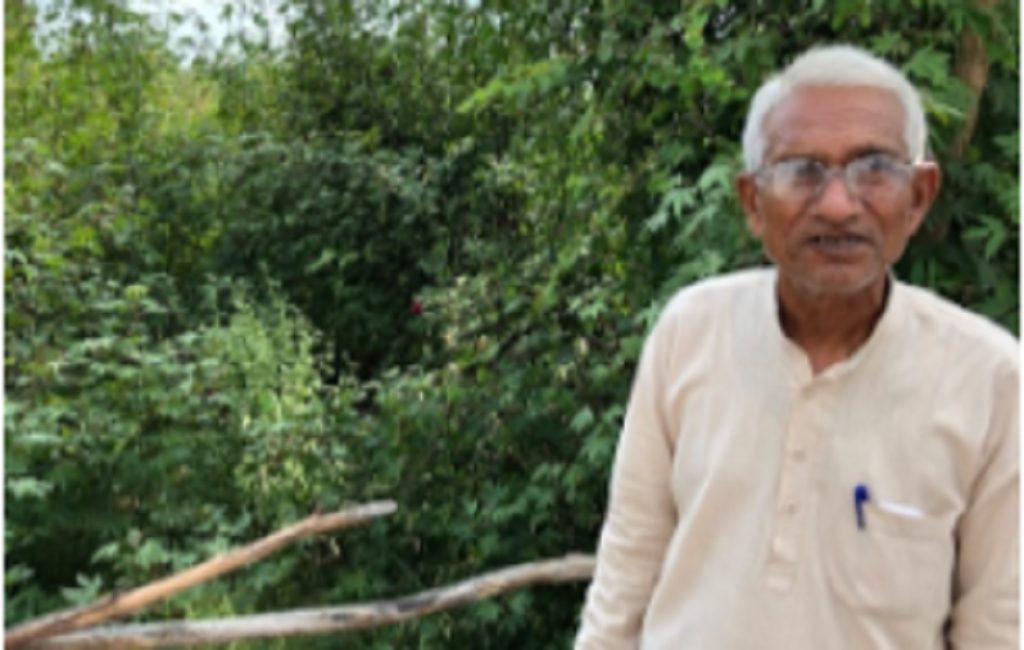 While developing this method by experimenting on his farmland, he also got an opportunity to study dryland farming at the Indian Agriculture Research Institute in New Delhi through Krishi Vigyan Kendra (KVK).

Since he was already working with KVK to help him increase the agricultural output, KVK suggested that he study the dryland farming system.

That two-month course significantly enhanced his knowledge and helped him develop the one-litre water method.

Finally, after 10 years of rigorous trial and errors, Verma cracked the formula to grow all kinds of trees including the fruit- bearing ones.

Mr. Verma detailed out his practice as follows:-
(a) First and foremost the farmland must be levelled to stop the rainwater runoff. After receiving the first rain, 5-6 days later the weeds grow naturally.

(b) To remove these weeds deep ploughing is done. It also helps in breaking capillaries of upper soil layer.

This checks the upward capillary movement of water.

Similarly, just after last rain of monsoon once again deep ploughing is done in the farmland. It is usually done during the end of September.”

(c) After second deep ploughing, the saplings are planted in 60-70 cms deep pits in such a way that their root zone remains in soil layer below 30 cm.

(d) After planting, approximately one litre of water is poured in the pit and the sapling is allowed to grow naturally. When the saplings are planted in September last week or first week of October the temperature drops and as a result the upper soil surface is cold, hence the roots of the sapling penetrates as deep as possible.

Consequently, the sapling survives as roots get tight grip of the soil till February-March.

(e) Finally in April, when summer season begins, the top soil surface begins to dry and moisture content moves to deeper levels so the roots further moves down towards the moisture. In this way the plants get accustomed to absorb water from deeper levels in the soil and survive in less water on the top surface. 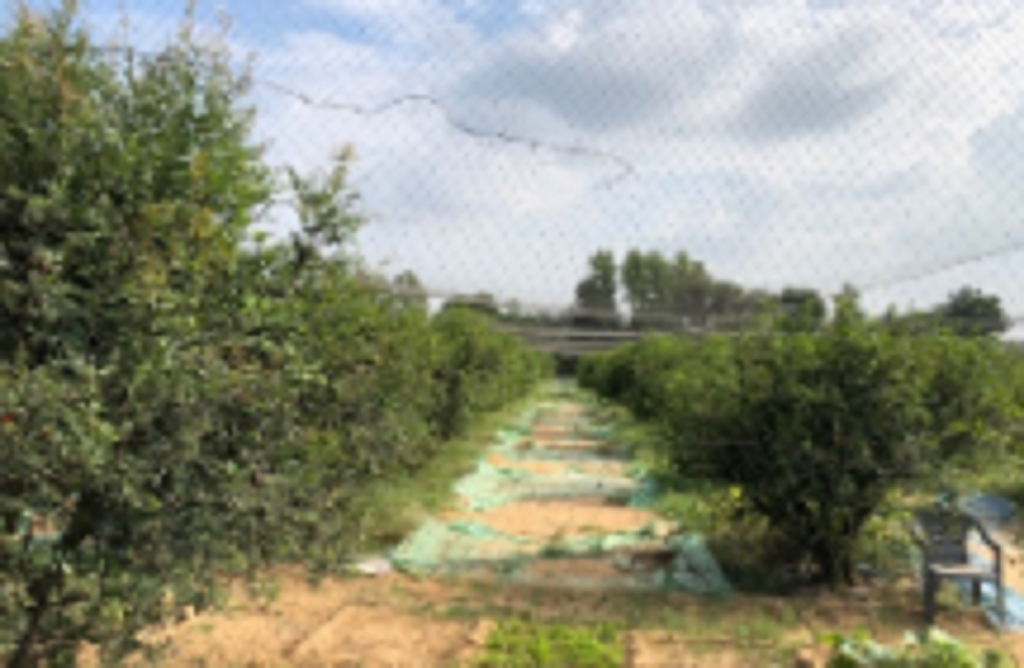 Results are phenomenal with plant survival rate close to 100%. Overall he has planted over 50,000 trees using this technique.

In addition, he has set up multiple nurseries and distributed 1,50,000 saplings to other farmers, and provided them training in his technique to promote afforestation in the drylands.

He also collects and preserves local variety of seeds, and has planted local varieties in his farm which are drought resistant, have good yield and are resistant to pests. 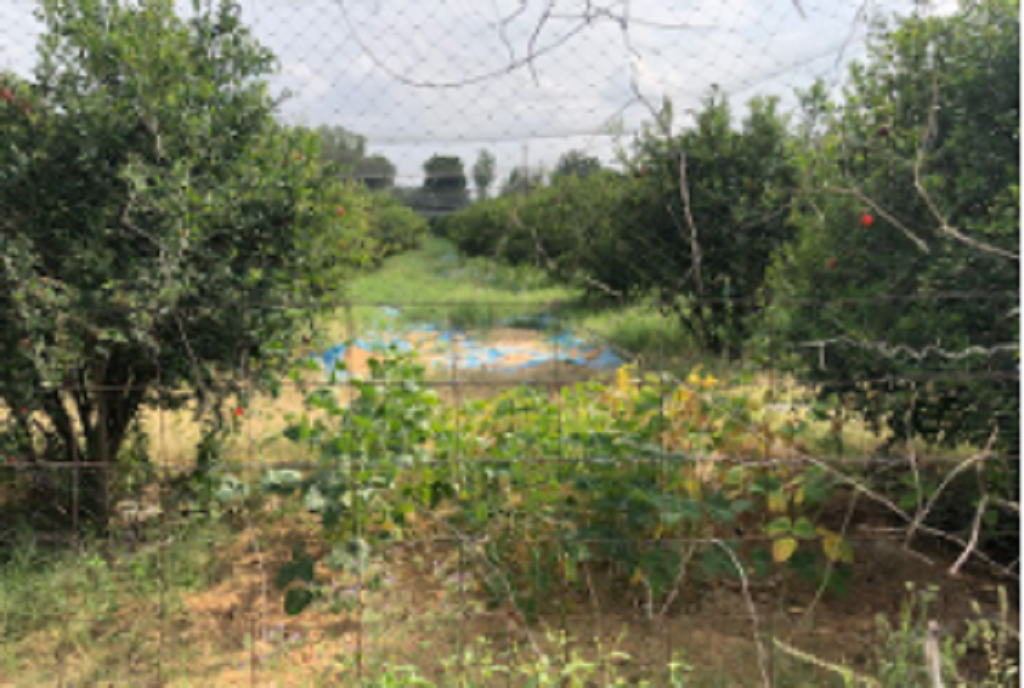 Towards water conservation, he has effectivelyutilised the rain water by creating an efficient way to direct the run off into the farm pond.

The farm ponds have been lined with synthetic sheets which prevent water loss. His entire requirement of water is met through these
techniques.

For his entire drinking water requirements, he has set up a simple but effective rain water harvesting system on the rooftop, which collects water in a fresh water tank in the basement.

The grey water generated in the household is also directed to soak pits, which in turn are used to recharge the ground water. 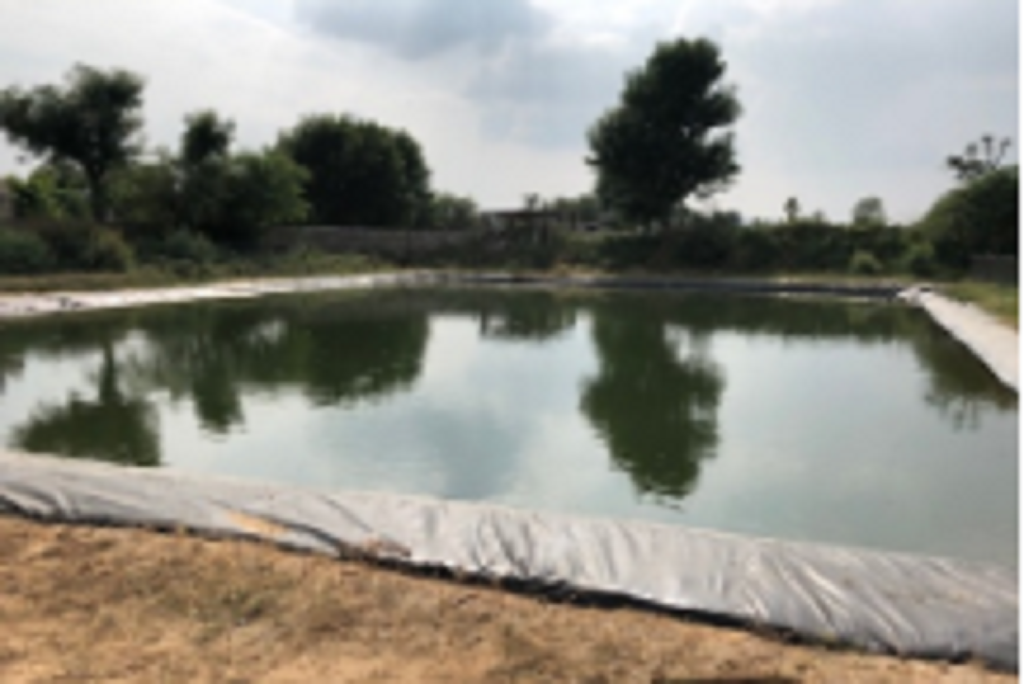 For his entire drinking water requirements, he has set up a simple but effective rain water harvesting system on the rooftop, which collects water in a fresh water tank in the basement.

The grey water generated in the household is also directed to soak pits, which in turn are used to recharge the ground water. 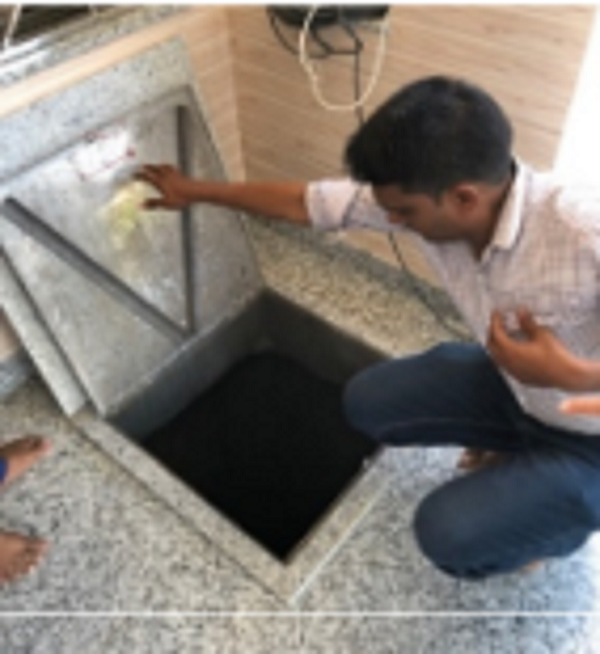 The Central Nodal Team was pleasantly surprised meeting such an aware farmer, who was appreciated by each member of the local Block level teams.

The Central Team requested the BDO to forward a report on the achievements of Mr Sundaram to the State authorities and to the central ministries (Agriculture and Jal Shakti Ministry). 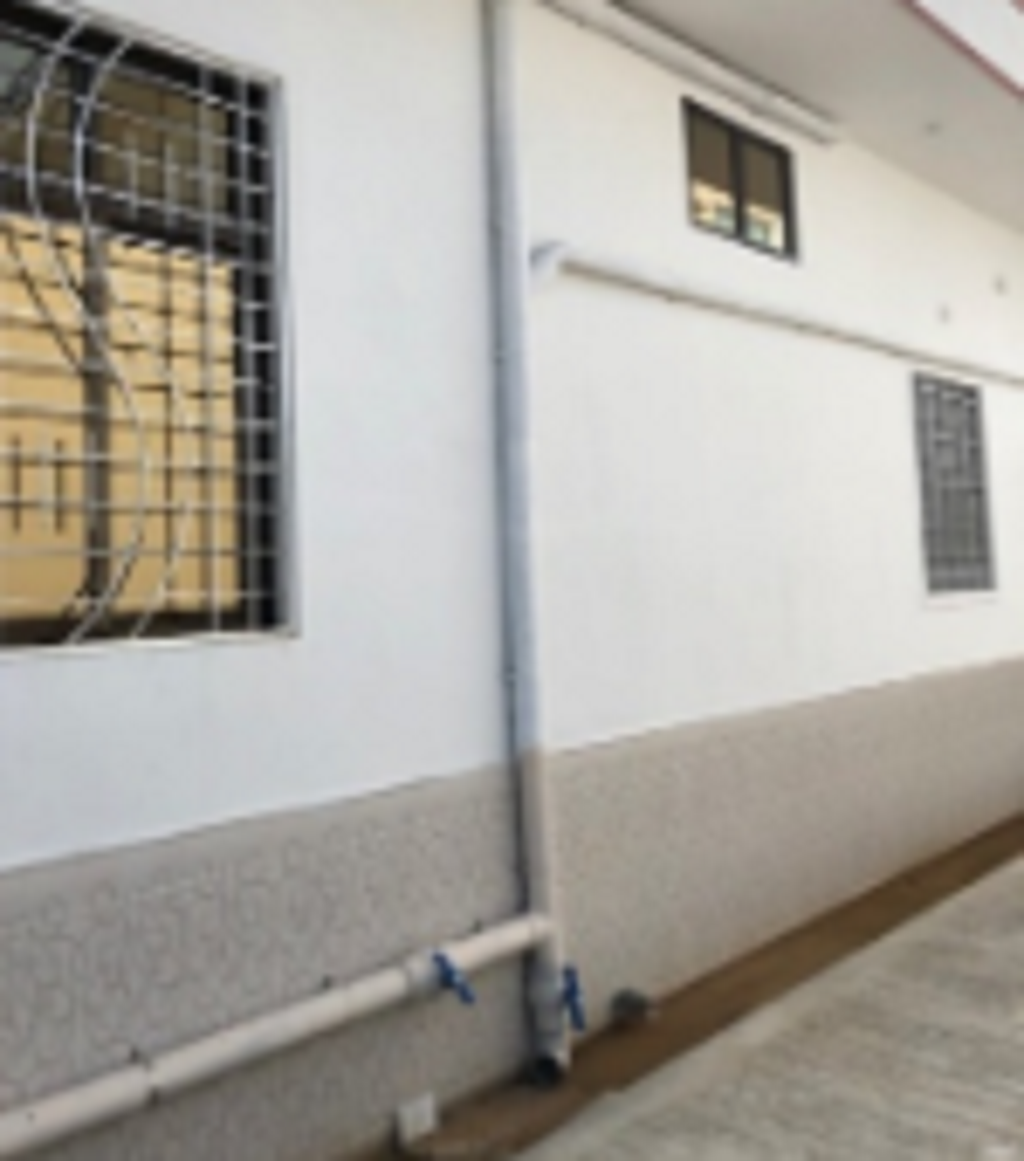 The Central team also included Mr Sundaram and his achievements in their visit reports.

Consequently, the Government of India has recognised his significant contributions in the field of Environment and Afforestation and conferred the Padmashree award on him on 26 Jan 2020.