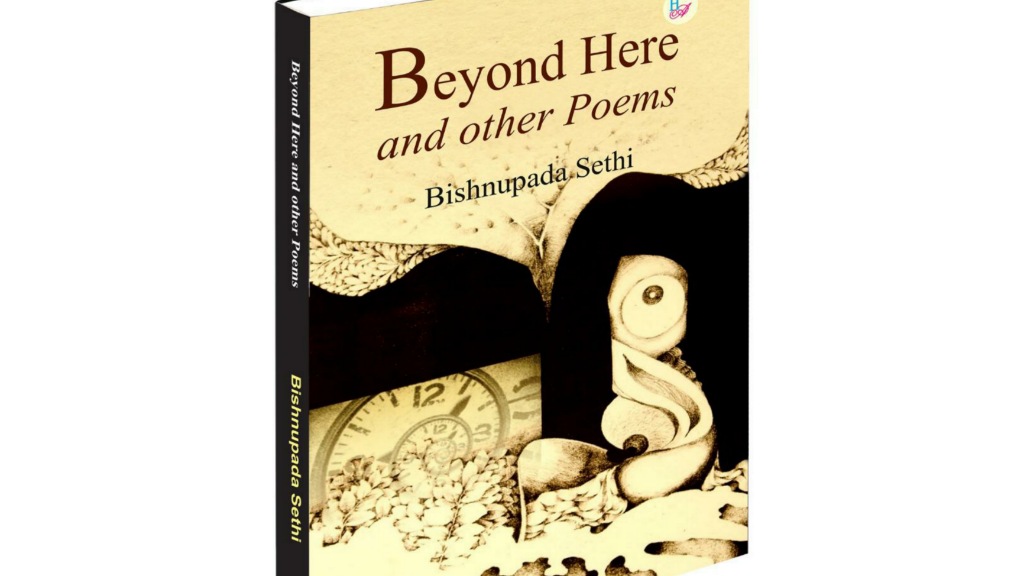 The search for their own identity is an engaging pursuit of poets. In his quest, a poet traipses into many unfamiliar territories and strange experiences, but he always comes back richer — and a step closer to self-discovery.

In ‘Beyond Here and other Poems’ the poet Bishnupada Sethi embarks on such a journey from the here and now to beyond.

The upshot of his endeavour is a hamper of beautiful and discerning nuggets of wisdom that give life its profundity and imbues it with myriad colours.

The poet is mindful that our grasp of any truth will remain fragmentary if it is explored in isolation of its opposite.

Hence death pops up again and again when the poems grapple with the meaning of life.

Ruminating on the sudden vanishing of life, the poet wonders, “The living energy/Does it ever come to a halt?/Can that be extinguished/ Or dissipated?” And then, “How that only thing/ Which makes you feel exist/ Vanish once for all/ Leaving no discreet link?” (“From Inside a Room of Life. Page-41)”. Even while reminiscing about his romantic moments spent in the fragrance of jasmine, he begs his sweetheart to lay on him the garland he has been making as he embarks on “life’s last journey” (“Garland in My Cupboard.”

While death shows up amid the celebration of life, it does not intrude as a herald of sorrow and finality.

On the contrary, the living and the dead come together as fundamental parts of a cosmic whole, pointing to the soul’s permanence. In the eponymous piece, “Beyond Here”, the poet declares, “I don’t appear in a body/ No one judges me ugly/ I’m loved/ I’m eternal/ I’m in a blissful state.”

The poet knows that his time on this earth is limited and that “with the passage of time/ I will be gone,” but his soul craves, “I wish to know/ How do I connect/ To the places and people/After I am gone.” “I wish to Know.” Although the lines obsess with mortality, the allusion is largely tangential: death is treated as only an undeniable fact of life.

However, death becomes vivid and sensory once the pandemic plays havoc with humanity with all its instruments of torture.

The poet moans as a “great grief, panic and deep pain/ Seems looming all over.” “Where are the Children Gone!”

. He surveys the gloom that surrounds the locked-down world as people are dying in their droves. The stench of death is too overpowering to ignore.

Yet, the overarching death consciousness fails to rattle the poet’s world not only because he considers death the flip side of life but also because life should be celebrated in full force.

He presents happy memories of his childhood, conjugal love, time of celebration with young ones in the family.

While observing Daughter’s Day, the poet exhilarates, “How lucky/ have I been/ To have a daughter/ Lively and pretty!/ She is a blessing/From the heavens.” “On Daughter’s Day .”

Just as the poet shuns the idea that life is confined between birth and death, he also sets aside the concept of linearity of time. In his universe, past, present and future seesaw and take each other’s place, conjuring up the essence of eternity, continuity of life and reappearance of memories. He writes, “Future is never an extrapolation/ Of the present state on the passing away of a loved one.” Also, “Something was to leave soon/ To be part of something else”, “Quite Unusual”. In many pieces in the book, the continuity of life comes out as a dominant motif.

The essence of the father lives on in the child.

The five elements that constitute our beings are shared by all, in the past and the future, ” Like I’m an aggregate/ Of all my forefathers.” “Till Infinity.”

Besides death, separation, leaving, irrational fear, and nightmares are recurring themes of the poems. But despite their preponderance, what gives succour to life is faith in the soul’s indestructibility, close unity of humanity despite outward divisions and eternal bliss of the almighty. These are the ‘beyond’ parts.

The poems, in their bite-sized pithy lines, exude a rare lyrical grace. The subjects are disparate yet fit nicely under the central theme of life and death.