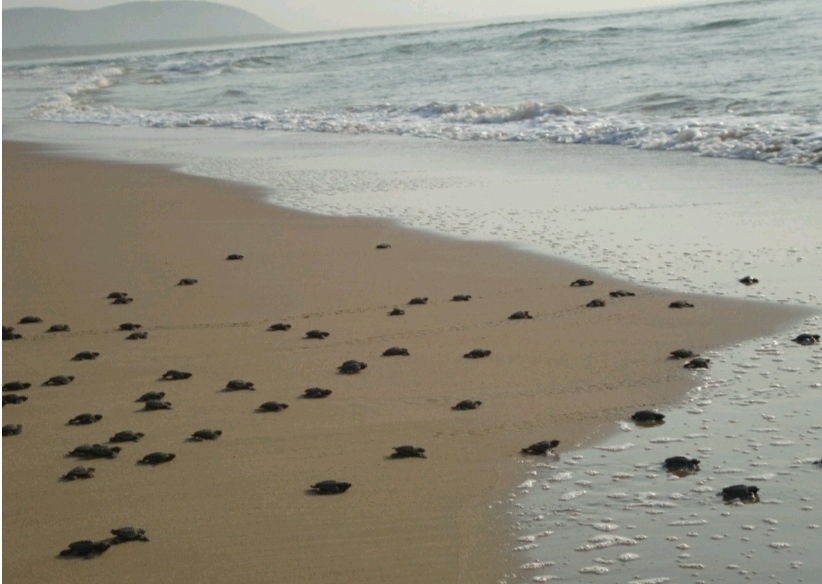 QIn a dropped down spirit with crossed arms and pulled together shoulders, face turned downward, I was desperately searching for the mother Olive Ridley Sea turtle to make her know that her babies were popping out from the rookery, that she should be going near them to caress the babies as the mother dogs or cats do with their little ones, but there was no trace of her.

After making some frantic search for the mother sea turtle to push her to cuddle the new born babies with love, I eventually realized that there was no hope for searching the female Olive Ridley Sea Turtle.

This realization, made my energy stripped off my body and I stood there like a passive bystander, with sinking shoulders, teary eyes giving no attention to the popping up babies, immersed in the imagination that how can a mother abandon her eggs and vanish somewhere deep in the ocean! Just then a loving touch I felt on my shoulder, I looked up and see a transcending smile of ‘Ms. Chitamma’, the UN Equator awardee for the conservation work for Olive Ridley Sea Turtle.

She said with a bright smiling face, “Don’t worry, they know where their mother is living. You will see, these tiny little ones, will make their own way, up to their mother. Just wait and watch.”

It made me smile once again, restoring my curiosity in these little creatures and their journey.

I watched with Chitamma, how the small ones were popping out from beneath the sand and advancing straight in the direction of sea.

The moment they emerge from underneath the seashore, they flap their four legs projected out of their shell from both the side and head protruding towards the direction of the brine.

Instantaneously with their profound waving of their limbs they moved forward in the direction of sea, lurching through the sandy beach, finally entering in the water and start floating.

The view was enormous and magnificent, as thousands of them were seen floating in the sea water, lurking with the waves, getting submerged under water in a moment and then lifting up their body floating on the surface of the wave the next moment.

These were some of the memories of Chitamma, the woman who played a pioneering role in sensitizing and involving local fisherman community in the conservation work of one of the most beautiful yet mysterious creature of ocean world, the olive ridley sea turtles.

The news about beginning of mass nesting in the Rushikulya estuary in December 2021 briskly created a flashback of yesterdays that I spent with Chitamma at the arribada site.

She had a great convincing personality; with a smiling face she can make anyone understand the relevance of protection and conservation of the smallest creature of the sea turtle family.

Maybe she, in her inner capacity had ascribed herself the motherly role for these soft, non-threatening ocean animals, became instrumental in promotion and conservation of Olive ridley sea turtles, those are coming to Rushikulya estuaries annually for mass nesting.

During my childhood, I got the opportunity to witness the serene beauty of hatchery and hatchling of Olive Ridley Turtle eggs on many occasions along with my father.

Whenever I went to the estuary to behold the magnificient activity of laying of eggs in a self-dug hole and then covered with sands by mother turtles in deep dark night, I always found Chitamma being present there, with her volunteers.

Since the beginning of mass nesting up to the last hatchling of turtle eggs, she kept a vigilant eye over the place, to protect the eggs from possible predators.

The mother turtles after laying the eggs in the sandy beach, leave the place, exposing the eggs to the predators.

Chitamma understood the vital importance of the Olive Ridley Turtles in the promotion of marine ecosystem, which ultimately results in good catch for the fishing community throughout the year.

She made the fisher folk realize this fact, and with her charismatic personality, created volunteers who work day and night for the protection of the abandoned eggs till the hatchling of the last egg.

Olive Ridley sea turtle like other member of the turtle family play a critical role in maintaining the marine ecosystem.

They are omnivorous who feed on all types of invertebrates found in the marine water as well as in the estuaries.

Like the scavengers of marine world, they eat all types of dead aquatic animals, thus cleaning the sea bed.

They are the predators of jellyfish who prey on the fish larva and egg, and hence create a marine environment for the fish population to grow.

Chitamma had understood this beneficial aspect of the olive ridley turtles in her young days from her observation and experience, much before the forest department led conservation programme that took shape in the state of Odisha since 2010. She had observed that, in the post annual event of mass nesting the fish catchment increase in size.

In rare occasion, when the mass nesting got shifted to some other place instead of Rushikulya estuary, catch of fish fell down drastically.

This observation made her to establish a positive co relation between the arrival of the turtles and good fish catchment, however she lacked the terms and terminology to convince the fellow villagers to work towards the conservation and protection of the turtles, that took ground after the forest department’s initiatives.

The olive ridley sea turtle otherwise known as Pacific Sea Turtle travels a great distance in the sea and act as great leveler in maintaining diversity throughout world’s ocean by transporting multiple marine life that thrives on them.

In recent years they are listed as endangered as their numbers are shrinking, due to their uniqueness in the reproduction process.

The mother turtles lay their eggs on the beach, where they have seen the first light of the sun and touched the first sea water.

They travel quite an impressive long distance to lay their eggs in the coast line of Odisha in Rushikulya estuary, Gahirmatha and Devi River estuary, the prominent three nesting places in the world for the Olive Ridley Turtle.

Another unique feature of their nesting behavior is that they move in large numbers, lay their eggs in the beach, cover it with sand, vacate the place and get immersed in the sea water.

This impulsiveness of the mother turtle makes the eggs vulnerable to fall prey to the predators.

Here comes the role of Chitamma, who like a mother figure along with the forest officials and community volunteers make every possible attempt to protect these abandoned eggs.

Fences are erected around the natural hatchery site along with creation of artificial hatchery provisioning, to protect each and every turtle egg.

She was vigilant enough to see to it that all the eggs got hatched, the babies get safe passage to return to the sea.

I got the opportunity to interact with Chitamma, when I was seven years old.

At that age, the abandonment of eggs by their mother was annoying me, I was in a haste for the reunion of mother and the babies.

I wanted to help the little ones by releasing them in the sea that would ultimately ensures their reunion with their mother.

However, Chitamma with a smiling face made me understand the struggle aspect of the baby turtle in finding their own way towards the sea water.

She said, “If the babies could find their own path by responding to the sound of the sea waves that would increase their survival chance in the ocean world.

Allow them to search them their own way, we are here for those who are unable to locate the sound and move towards the wrong direction.”