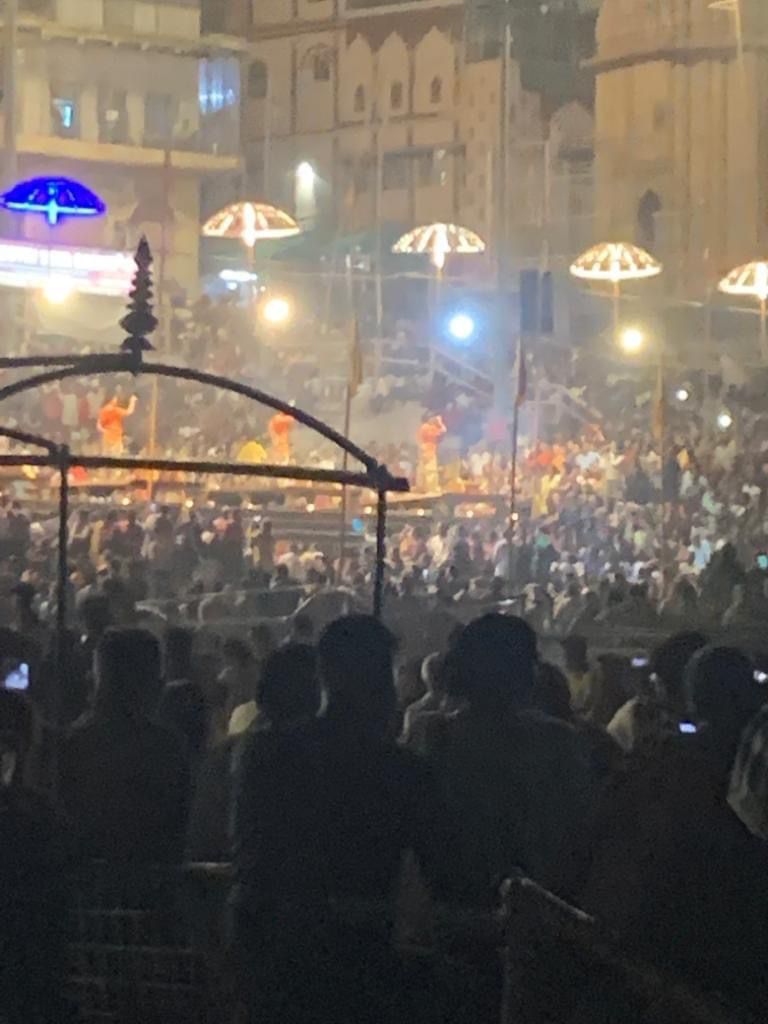 This was my first visit to Banaras.
Had been thinking of visiting Banaras for a quite a few years, but something or the other would come up and the plan would have to be put on hold.

Friends would look incredulously at me when I told them that I had never been to Banaras. “Never,” they would ask. And “never,” I would respond.

Not this time. The Gods eventually smiled on us and off we went earlier this week to the city that seemed just like my late silver-haired grandmother – old, warm, affectionate and inviting. I and my wife booked a room at Shiv Ganges view guest house right at Mansarovar ghat on the river Ganga, after reading a post by a facebook friend Bishwanath Ghosh.

It turned out to be a good decision as we understood what being in old Banaras means. There are alleys connected with more narrow alleys, a kind of a maze in which first timers are bound to get thoroughly confused.

We stood at the main road and took a long look at the alleys. I just shook my head. I then called for help from the guest house. We followed the guest house guy into what looked like a labyrinth.

As soon as we stepped into the narrow alleys, the temperature became cooler. It was not searing hot. It then dawned on me that these narrow welcoming alleyways are actually a thriving microcosm, hidden away from the rest of the world, yet with a life of its own.

Reached the guest house and took five flights of stairs to reach our room. Stepped onto the terrace and the view was breathtaking.

The powerful Ganges flowing majestically as boats of varied sizes went up and down. The other bank was barren.

We found it tucked into an alley. Had earlier spoken to Ujjwal Lahiri who is now based in London so it was not too difficult to find. Of course, the kindly people of Banaras were more than happy to direct us. 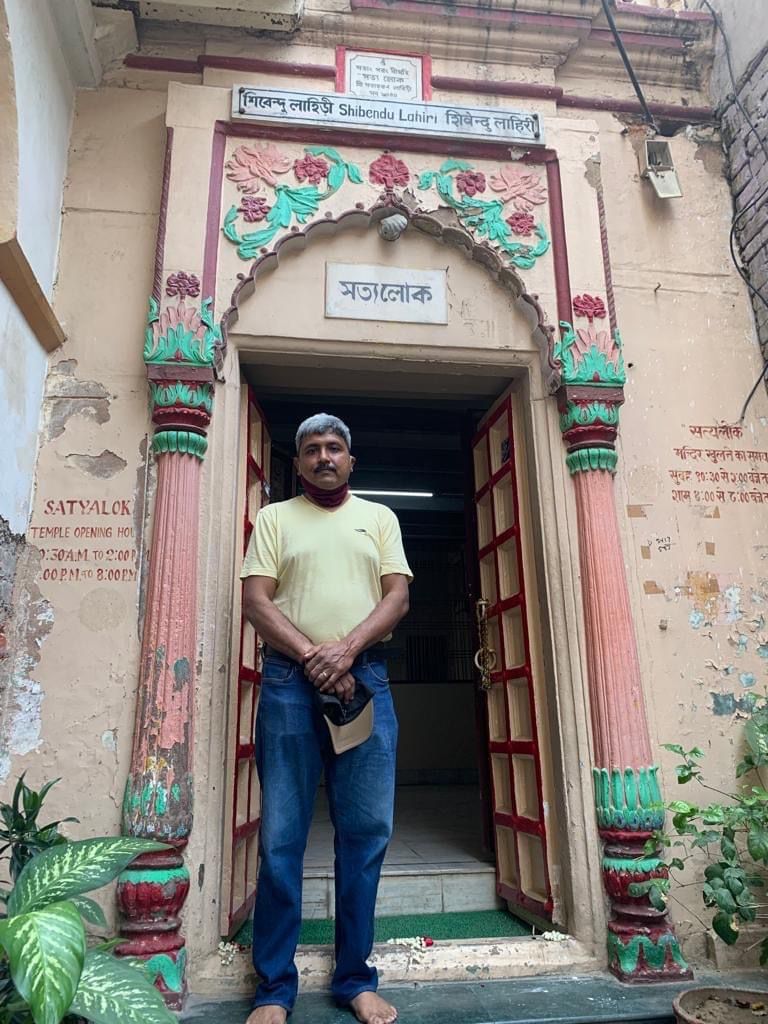 There we paid our obeisance. We were informed that his actual home was near the old Kalibari and we were provided the general direction.

I and my wife again looked at the narrow alleyways and decided that it would be best if we go to the actual home in our next trip.

So, we decided to walk in the general direction of the main road that leads to Godowlia chowk, an important intersection that connects with the Kashi Vishwanath temple.

Unbelievable as this may sound, while walking out of the alleys, we suddenly saw the Kali Bari and just a short distance away was the actual home of Lahiri Mahasaya. It was as if we were meant to find Lahiri Mahasaya’s abode.

What a beautiful start to our Banaras sojourn.
Anyway, we finally reached the main road and it was just too hot. We decided to visit the Kashi Vishwanath temple in the evening.

After an afternoon siesta, we visited Kashi Vishwanath temple. It was an extraordinary experience. Once you step into the temple complex, it is a different feeling. Paying obeisance at the Shivling was spiritually uplifting.

It is not easy to describe the thoughts that race through ones mind as you offer prayers and seek Lord Shiva’s blessings.

From there, we went to the temple of Kaal Bhairav, also called the kotwal (police chief) of Kashi.

Believe you me, Kaal Bhairav has a riveting gaze and we actually felt that statue of Kaal Bhairav is looking at you. In fact, staring right into you. It was akin to the feeling that I got when I had visited the Mahakaleshwar temple in Ujjain. That look is so powerful that you will feel as if now there is nothing to worry about in the world as He is there to protect you.

It is certainly a matter of belief. Anyway, that is what I very strongly felt.

It was late evening by the time we returned to our room. Exhausted, yet spiritually energised.

We decided to go down to the river bank where a boat was about to leave for the Ganga aarti. We were the last two people to get onboard that boat.

The boat reached Dashwamedh Ghat from where we watched the aarti. It was a surreal experience.

The next morning we headed straight to Sarnath where Lord Buddha first taught the Dhamma and the Buddhist Sangha came into existence.

It is such a lovely, calm place.

There is a massive Stupa close to the Sarnath temple. Ashoka is said to have built the Stupa at Sarnath.

From there we visited the Japanese temple.
Then, we went to Sarangnath temple where two Shivlings are placed together.

It is believed that Lord Shiva visits this temple during the month of Shravan in July-August as it is dedicated to his brother-in-law.

Returned by late afternoon to the by now familiar alleys of old Banaras and headed straight to the German bakery “Monalisa” that we had spotted the day earlier. The food was good, but not interesting enough.

While returning to our guest house, had a glass of lassi. It was good. So, had another glass of lassi and chatted with the man selling lassi.

In the evening, we wanted to visit Manikarnika ghat so that any ego that we may be having could be firmly booted out. It was not to be as a VIP was visiting Dashwamedh ghat and there was a huge crowd. Police had blocked off parts of the road.

Always believed that all are equal in front of Gods. Not so. Indian VIPs are more equal than us lowly mortals.

Crestfallen we were going back when we saw Kashi chat bhandar, a part of a list that a dear former colleague Swati had shared.

The tomato chaat served in a kulhad was outstanding, quickly lifting our spirit. The aloo tikki too was good, but not extraordinary.

There was a massive rush at the shop.
We walked back to our guest house and decided not to go back to our room. Rather, sit on the river bank and give some respite to our weary feet. We had also not been able to visit Manikarnika ghat where bodies are burnt continuously without a break.

A boatman walked up to us and offered to show us all the ghats. A bit of bargaining later, we clambered on to the boat and headed towards Harischandra ghat.

From there, he showed us all the ghats and explained a bit of history.

He stopped the boat for a while near Manikarnika ghat. Those five minutes there were like a wake up call. The pyres were blazing in the setting sun and more bodies were coming in. The finality of death does hit one hard.

The boatman said that at midnight the ashes from the funeral pyres are collected and used for prayer at the temple.

Returned to Raja ghat, walked up the steep stairs from the river bank and headed to the original German bakery.

There, we met Michael Schmid who runs the bakery. He is a skilled baker and he has shared his bakery knowledge with others. He also runs a school for underprivileged children along with his Italian wife.

Michael’s story was quite inspiring.

Before leaving for the airport the next day, we decided to take a dip in the Ganges. I was not feeling too confident, but faithfuls were taking a dip. So, we decided to go ahead even though I recalled reading far too many stories about the pollution level in the river.

Faith, however, is faith and took a quick dip. Practically scampered back to the guest house room to take a bath.

Left for the airport, but not before bidding good bye to the alleys which in just a couple of days had become friendly.

We no longer needed to seek directions.
In a sense, we knew our way.

That is what Banaras does to you. Shows you the way without you even realising it.
Banaras is not just a city steeped in history. It is a way of life.
Experience it.