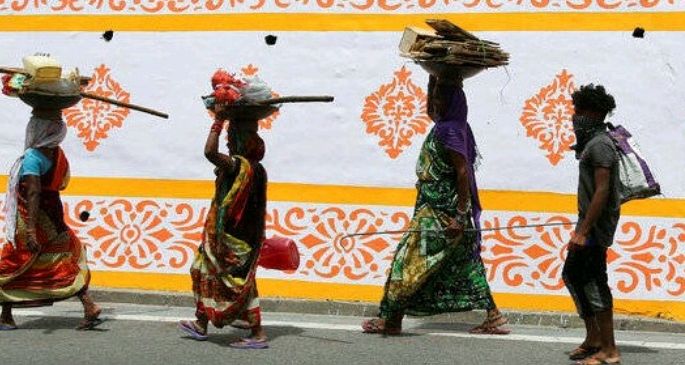 Doing mind boggling project work for the class semester along with a bemused project partner in a hot and humid day in the month of May, in his house was annoying and irksome.

During those frustrating and bothersome time of cracking the whip, my project partner immediately felt the urge for devouring something to shift his attention for a short period and then re-fix the attention to pin down the ungraspable project concept.

In that wee hour, the savior was online platform based food delivery app.
It was an imperative guideline followed in my friend’s house is that before ordering anything by the online application, the permission of the lady of the house is mandatory.

So, when he seeks his mother’s permission to order some food by the online platform, she was reluctant about the idea rather offered us some freshly cooked food.

The point of argument she put forwarded before us was that, “it is not right to get your food delivered by the ill paid people, who do not feel happy while delivering their jobs.

Delivering food is neither remunerative nor lucrative for them, but people are doing it because they are frantically searching for jobs, and there is serious crunch of employment opportunities. Receiving food from the half-paid people in my opinion is not correct.

So, get to your work I will cook some interesting dishes for you people.” Obeying to her order we got back to our work and within a couple of hours of hard work our obligatory project got accomplished but I personally left behind with those simple yet thought provoking words.

The delivery boy of the online food delivery app or the taxi-drivers of online taxi service app comes under a new category called gig workers who works on temporary basis typically in the service sector.

The term worker, in traditional notion, is always related to an employer or an organization, that happens to take care of the needs of the worker either due to morality aspect or bound by the policies.

The care for the staffs, vary from regular salary and its up gradation to health-related expenditure, meeting exigency needs and many such requirements.

But in the case of gig workers, working on online platform, temporarily contracted for certain work for certain period of time, volatility of meeting the essential needs of life increase to multiple times.

In the traditional arrangements, workers freedom is highly restrictive along with a sense of security that used to ensure emotional comfort to the worker.

On the other hand, the gig workers enjoy their freedom but with low bargaining power as the negotiation and contract is happening on the online mode and there is cut-throat competition due to the presence of multiple stakeholders.

Their susceptibility to stress disorder is very high due to constant alertness and vigilance over time bound duties.

The notion of gig workers has many connotations like online platform workers, on-call workers or temporary workers who enter into an agreement with the on-demand platform company to serve the company’s client on the requirement basis.

The payment for the work is done by the consumer as per the stipulated time basis or the assignment basis.

The paying party in this gig arrangement is the ultimate consumer of the service who pays as per the fixed time basis or the basis of delivery often ignoring other subtle issues of workers need like family exigencies or health requirements of the workers.

The concept of gig economy took its shape in the recent history, when two giant financial crisis grasped the world financial nerves sending the trigger of massive retrenchment, salary cut, and reduction in the size in the work force to avoid complete breakdown of the organizations.

The new alternative economic arrangements to protect the interest of the workers took its strong hold during the Covid response financial crisis in 2020 as well as subsequent emerging online platform based service delivery mode.

The Covid crisis within itself was a threat as well as an opportunity to reach out to the consumer and create an altogether different experience of shopping while still being inside the protective walls of home.

The functioning of gig economy is based on the online platform that during the Covid pandemic this approach became the savior for many organizations and individuals as well.

This platform bring in wide array of diverse products and services to the command of a simple click and hence proved economical for the consumer.

The small service providers can also take the benefit out of it by offering their services and the infrastructure base, like owner driver under such platforms or offering the expert cooking service under cloud kitchen by a home maker.

The concept of gig economy provides flexibility to its participants and thus helps to choose the best option for them.

Few other aspects need to be focused under this type of arrangement especially related to semi-skilled and less efficient professionals.

Their interest and welfare need to be protected under some strict policy interventions.

The labour force or the workers are not merely a factor of production rather they form the most vital aspect of production system i.e., human capital.

These individual workers have dependent family members and other high pressure requirements as well.

So, an economic arrangement that provides freedom to its participants if with strict vigilant system takes care of the various requirement of the gig workers, then only it would be a welcoming approach.

It will save many individuals struggling with high anxiety disorder because of their unpredictable, uncertain, insecure and flexible nature of job.

Labour is one of the most significant aspects of any enterprise building. The concept of labour that is to do certain works for the other fellow individual in exchange of certain benefits is only confined to human species leaving aside all the species of earth.

Humans, with the development of brain understood the fact that in order to outgrow oneself in terms of power be it muscle, economic or political, he needs to assemble and multiply the energy of other fellow individuals.

This understanding created the concept of organization and labour as well as brought on board the permanent conflict of employer- employee relations.

Instead of looking for quick benefits, we need to come up with solutions to protect and promote the right and dignity of each and every individual who are working as laborer to provide us goods and services.