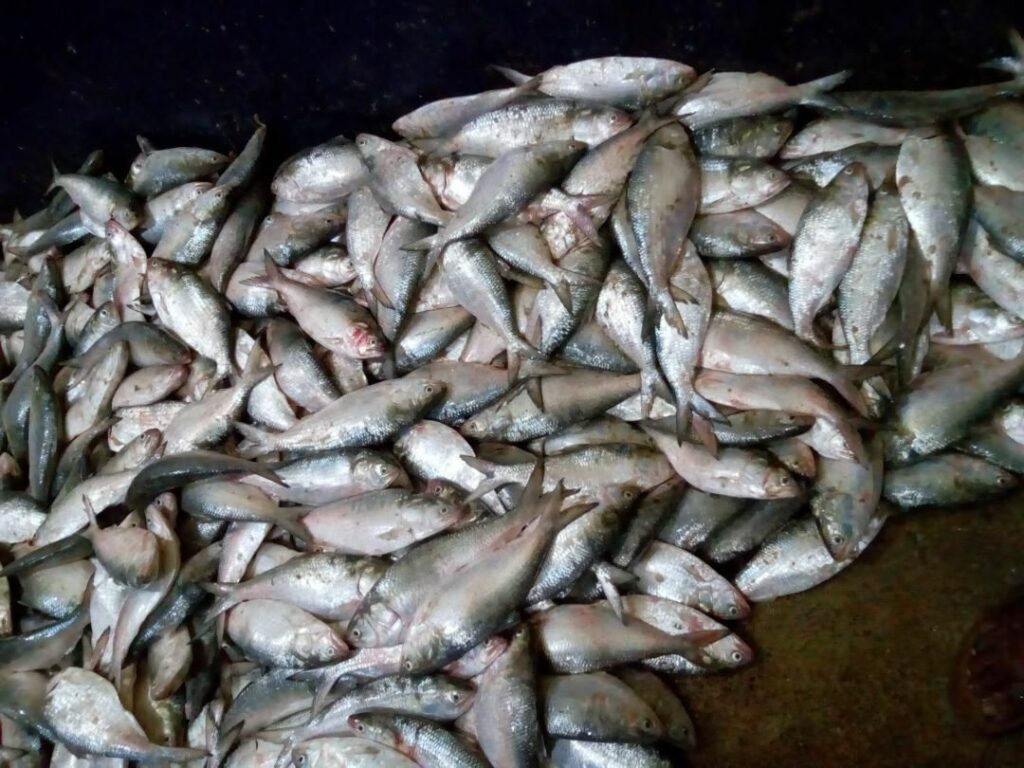 The Hilsa or “Ilish” is a great delicacy in the Bengali cuisine and can be served in a variety of ways. A 100g portion of Hilsa serves roughly 25g of protein, 310 calories and about 22g of fat. It also provides 2% of iron, 27% of the daily vitamin C requirements and a whooping 204% calcium. It is also very rich in omega-3 fatty acids.

But the excessive fishing of the juvenile hilsa fish has led to an extinction of the Bengal’s favorite delicacy.

The Hilsa (Tenualosa ilisha) is very popular in the Indian subcontinent specially in the Bangladesh’s Chandpur district. Bangladesh, which applied for Geographical Indication Tag (GI) in 2004, produces 70-75 percent of the world’s total produced ilish.

The Hilsa generally belongs to the marine habitats and during the southwest monsoons (June to September) and also between January and April, the fish ascends up the rivers for around 50-100 kilometers to spawn.

But, owing to a sudden decline in the Hilsa production since 1997-98, the West Bengal Government has designated a time period during which fishing of juvenile Hilsa is prohibited. Whereas, fishermen on the other hand, do not follow the rules, whether in rivers or at sea.

Excessive fishing has resulted in a rapid drop in the Hilsa population, and if the current practice of widespread fishing continues, it will no longer be affordable even to the typical middle-class Bengalis.

It has been found through research that Hilsa weighing between 2.2g – 27g are being caught indiscriminately. The fish was once sold for a stunning Rs 22,000, an amount no Hilsa had ever been sold for, according to traders at the Howrah wholesale market where the money was exchanged.

A retailer from Gariahat Market in upscale South Kolkata was the buyer. On an average, Hilsa weighing 700-800 g costs Rs 1,000, whereas hilsa weighing 1kg to 1,200g costs Rs 1,500. Because of the extremely high price range, the fish is frequently caught during the breeding season and illegally traded, resulting in a continuous fall in the Hilsa population.

The rapid drop is also due to heavy river silting, water pollution, and water flow restrictions caused by the Farakka Barrage.

Hilsa used to be seen in the Yamuna river near Delhi about 40 years ago, but the prize fish is now set to be extinct even in south Bengal.

Rather than investing a lot of money on artificially breeding Hilsa in ponds, raising awareness about the problem can help mitigate the situation.

1- Saying “NO” to the juvenile Hilsa fish when out for shopping. They are frequently sold by the name “Khoyra.” The nape area of the fish, as well as the slender and pointed tail, makes it easy to identify. This may discourage the fishers from fishing the juvenile Hilsa’s.

3- Spreading awareness among the fishers about Hilsa conservation.

4- The Government imposing stringent limitations on the ban of hilsa fishing during the breeding season.

5- Ensuring good governance and proper co- ordination at both the local and the national level.

The hilsa fishery is worth around USD 2 billion and is Bangladesh’s national fish and also very popular in West Bengal, particularly in coastal areas. It provides employment and money to millions of people in Bangladesh, India, and Myanmar. Therefore, adhering to the aforementioned guidelines can assist in avoiding the fish from becoming extinct.

(Rakhee Ghosh is an engineer in B. Tech Food Technology from Allahabad Agriculture University.)