As the arch of world’s highest rail bridge over the Chenab River in Kashmir gets completed in time for Independence Day, people in the valley look forward to a better economy when trains start plying.

From the foothills of the valley Mohan Bagat watched in awe as the final ‘golden’ joint of the world’s highest railway bridge was put in place. He felt like he was looking up at the skies, as the bridge is 359 meters over the Chenab River bed.

Bagat had rushed from his maize field when his son Ramesh told him about the ‘golden moment.’

Their village Bakkal in the Reasi district – nestled among the Sivalik Hills and Pir Panajal range – is one of the few communities near the Chenab Rail Bridge. With the golden joint in place, engineers can lay railway tracks now.

A farmer by profession, Mohan Bagat is overjoyed with the development. Like many villagers, he hopes to send his produce to other parts of the valley now, courtesy of the new railway line.

The Chenab Rail Bridge is being constructed as part of the Udhampur-Srinagar-Baramulla Rail Link (USBRL) project that connects the Kashmir and Ladakh regions with the other parts of the country.

Being 37 meters taller than the Eiffel Tower, the Chenab Rail Bridge is the world’s tallest single arch rail bridge. 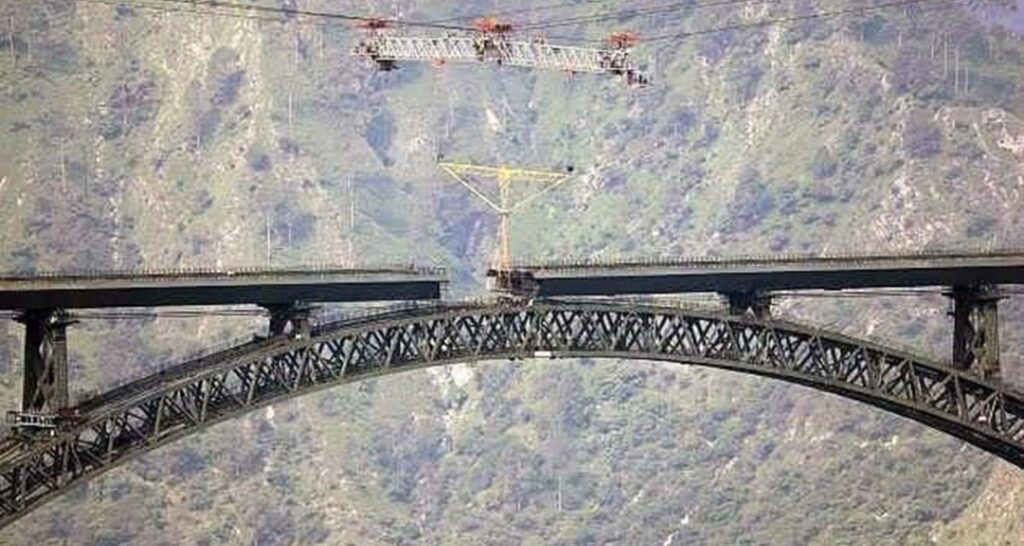 Being 37 meters taller than the Eiffel Tower, the Chenab Rail Bridge is the world’s tallest single arch rail bridge (Photo courtesy Afcons) However, for the people of the valley, the possibilities that a rail connection offers are more important than the world record.

For them completion of this bridge means good connectivity to other parts of the country throughout the year.

“We hear trains will be run next year. Since there’s a railway station near our village, I can send my produce to Srinagar or other parts of the valley,” said Bagat looking at his maize.

Roasted maize corn is in good demand in the tourist spots of the valley.

“So far I’ve not been able to sell my maize outside Ramban town. But now I hope to get good returns by sending it to better markets,” Bagat told Village Square.

Reality of an engineering marvel

People on the other side of the river are also upbeat. They know the bridge is an engineering marvel, as they had observed the workers building the bridge through many challenges, including the risks of working at such a height and extreme weather conditions.

Fifteen years ago when I heard a news in the local radio about a proposal to run a train between Udhampur and Srinagar, I remember having a sarcastic laugh, now I see that it has become a reality.

Built by Afcons, a Mumbai-based engineering company, the bridge spans a length of 1,315 meters. It has 17 pillars and a beautiful single arch, all made from quality iron and steel.

“Fifteen years ago when I heard a news in the local radio about a proposal to run a train between Udhampur and Srinagar, I remember having a sarcastic laugh,” said Ghulam Mohammad Wagay, who sells shawls. “Now I see that it has become a reality.” 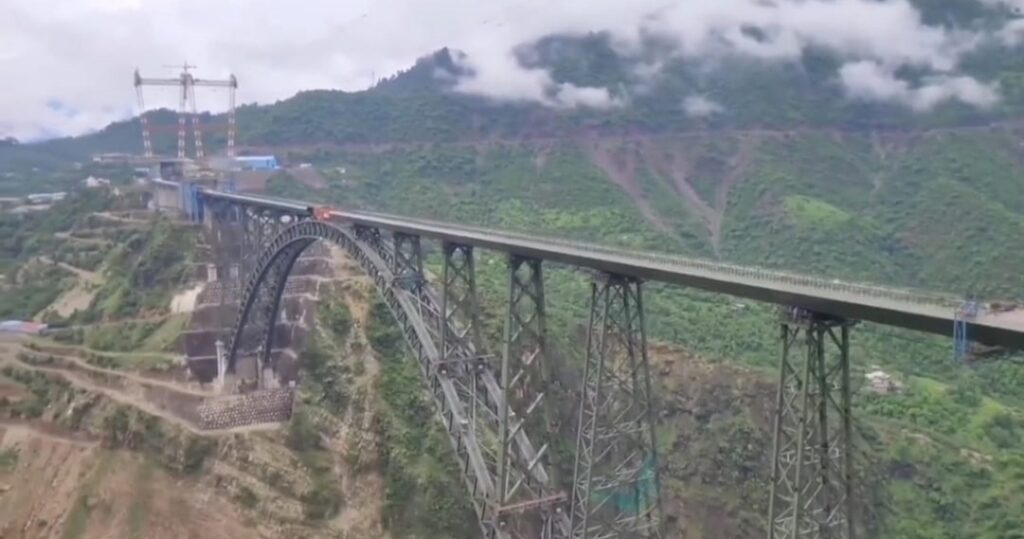 Built at a height of 359m over the river bed of Chenab, the Chenab Rail Bridge is the world’s highest rail bridge (Photo courtesy Afcons)
It was a proud moment for many, as the workers planted the tricolour during the inauguration of the bridge – in time for India’s 75th Independence Day – after the ‘golden joint’ was placed.

“Since the bridge has been inaugurated now, the work on laying of railway track will start soon,” Sanjay Gupta, Chairman and MD of Konakan Railway, the main railway company working the USBRL project, told Village Square.

Ghulam Mohammad Wagay has been selling shawls in the villages of Chenab valley. With better connectivity after the railway lines are laid, he expects trade to be better.

The Indian flag during the inauguration of the bridge was a happy moment for many (Photo courtesy Afcons)
In pockets of Udhampur, there is a good production of radish and spinach by the end of January. This is also the period when the demand for fresh vegetables in the valley is at its peak because of the lack of local production and closure of roads. 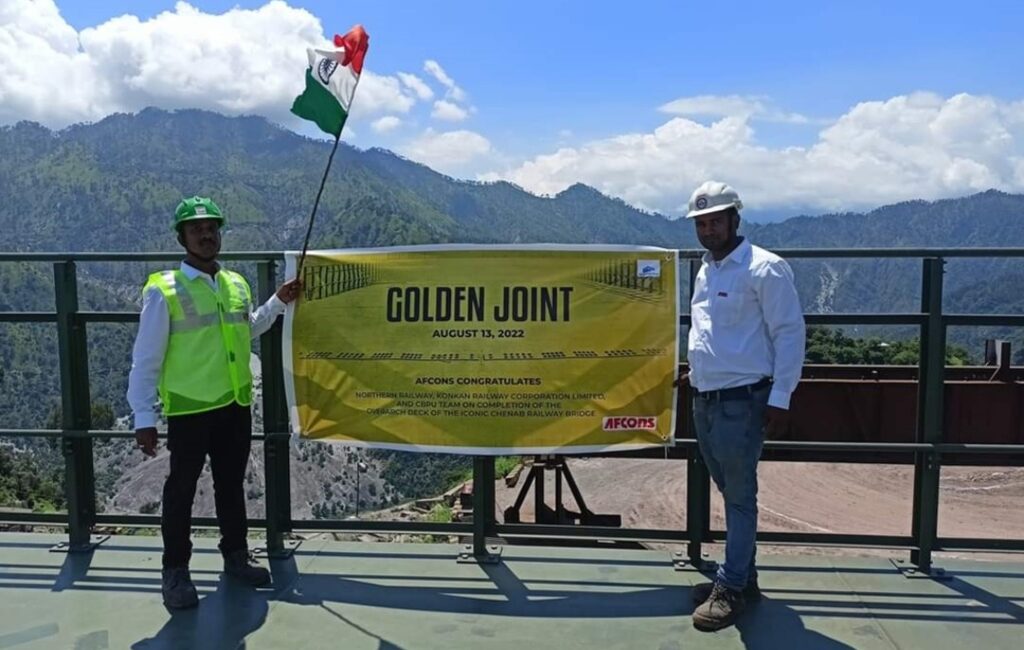 Din Mohammad Choudhary, a vegetable dealer from Ramnagar of the Udhampur district, generally takes his produce in mini trucks.

“But the frequent closure of national highway due to inclement weather often meant that my toil was for nothing,” he rued.

“But when trains start plying, I expect good business during winters. I will be able to take fresh vegetables to other places.”

For Mohammad Shafi, a seasonal labourer working in the apple orchards of South Kashmir, the bridge is a great development. 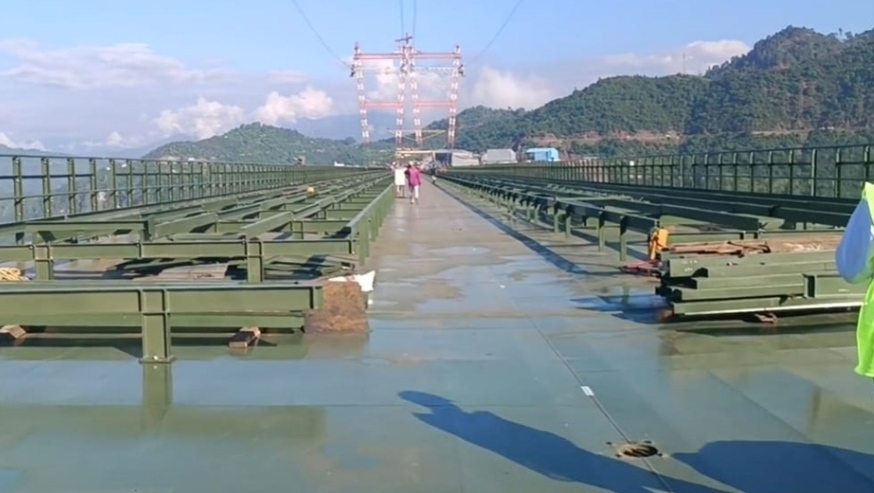 Once railway tracks are laid over this bridge, people are hopeful that the local economy would improve (Photo courtesy Afcons)
“Earlier I used to stay in the valley during an entire harvest season, as going home involved a hectic travel in the hills. But when the train starts running, I can go back to my village when I have a few days’ break,” Shafi told Village Square.

As the rail transport will be a reality soon, besides the apple growers and farmers, the tourism fraternity is also buoyed that it will improve the local economy.

*This article was published in villagesquare.

Nasir Yousufi is a journalist based at Srinagar.