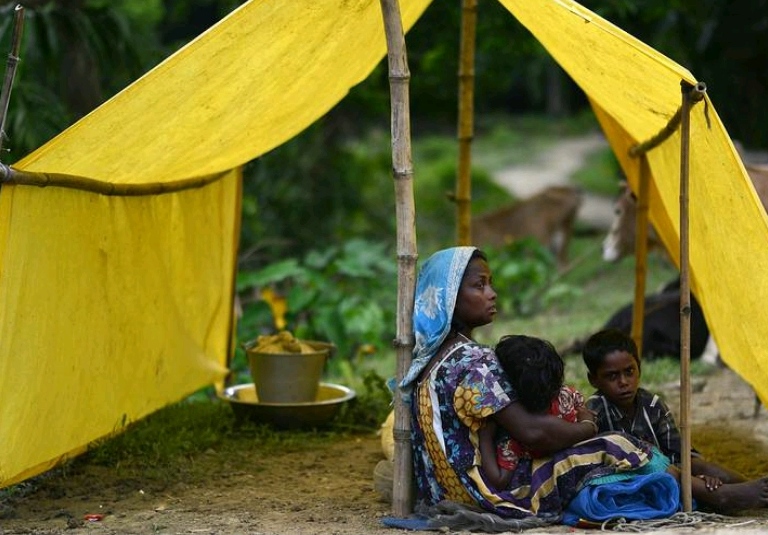 Innocence, playfulness, inquisitiveness and carelessness are few adjectives related to young kids along with certain mental conditions like worries, tension and apprehensions, are way beyond the reach of juveniles.

The little ones are always found with emotions like happiness, casualness and trusting the elders, while in behavioral terms, they are known to be active and constantly on the search of new things around them.

On the contrary to these known traits of children, an image on the television broadcasting the helplessness of flood victims of Odisha 2022, two young children around age five are seen to be sitting quietly holding all their limbs together along with their mother on the embankment of Mahanadi River, to avoid snake bites, a rampant reptile behavior during flood situation.

Their grim and sad face was testifying their unhappiness for restrictions imposed on their playful activities with so much of water.

The mother on the other hand was worried about the wellbeing of her children during such flood crisis where everything including food, drinking water, sanitary condition and safe shelter is in short supply.

Since the father of those two young minds, a migrant laborer, working in a different state of India and absent from that place during such serious flood crisis, the ultimate responsibility of various provisioning for the children falls on the mother.

In order to avoid any health emergencies while taking shelter on the embankment to avoid the flood water that is running high inside the village, the lady-imposed restrictions on touching the flood water, that perhaps disheartened the two siblings.

However, as the camera was rolling over the area showing the distressful conditions of the locals taking shelter on the embankment under polyethene roof, the visual of depressed and heavy-hearted young minds could be seen clearly.

The toddlers being in their elder’s captive were unable to release themselves to play around and were expressing their anguish by continuous crying.

But the juveniles being matured enough to understand parent’s various emotions were seen in sitting joyless condition amid heavy flowing flood water.

This is not the only the instance that the children were prohibited from playing.

Even during the 2022 summer season when the school time got shifted to morning hour to avoid scorching heat conditions, the children were precluded from playing with their friends in day time to avoid heat stroke.

The increasing thunderstorm affair with frequent lightening is also putting a curb on younger ones playing in the open field.

Other than these incidences, the harrowing cyclonic events that is continuously ravaging Odisha’s economy on regular basis since 2018 is also preventing the children from playing, learning, daydreaming about various aspects of life and hoping all positive to happen with them in the future.

The most brutal attack on the children’s learning and exploring behavior in recent years was received during the corona pandemic spread out where they were confined into the four walls of house.

May be this is the toughest time that the children of this generation have experienced that is going to affect them for the rest of their lives.

Childhood is one of the most important, unique and unmatched phase in an individual’s life span where he tends to explore numerous things that shape his life in future.

Children’s early experience including nutrition deeply affects their physical, cognitive, emotional and social development having tremendous impact on their personality.

During this early phase of life supportive environment with balanced nutrition along with provisioning of safe drinking water, stable and responsive relationship with parents and exposure to positive factors plays crucial role.

However, with increasing incidences of disasters of various kind and magnitude and also the spread of pandemic in recent years, children are the most vulnerable group as they are not able to articulate their ordeal.

They are dependent on the elders for their basic functioning and less vocal regarding their needs and requirements.

The stress, grief and disheartenment that the children receive due to the loss of near and dear ones due to disasters stays with them forever and have strong imprint on their personality.

Climate change is looming large over the world and now is high time that the children’s issues must be highlighted by keeping special attention on the psychological condition of these children in the fragile geographic conditions.

This should serve as the wakeup call for all the world leaders to leave a better world for our next generation. As rightly said, “the world does not belong to us, rather we have borrowed it from our children” and this should help us to work together to mitigate the vulnerabilities of climate change and frequent disasters.

This can only reduce the devastating impact on the children and will provide them a peaceful and comfortable environment to enjoy their childhood. This has to happen now or will never happen ever.