Not so long ago Anwar Chitrakar used to be a tailor. Last year he sold a painting for Rs 4 lakh in Dubai.

Chitrakar, who is a patua (scroll painter) by lineage, does not paint work that falls into any of the ‘isms’ of the art world but rather to an ancient art.

The patuas of West Bengal are a semi-itinerant community of narrative scroll painters who provided “edutainment” to rural audiences by singing stories from mythology and folklore.

Unrolling the hand-painted scroll frame by frame – props for their performance – they sang the pater gaan (story song). One of those patuas was Anwar Chitrakar’s father.

“As a child I’ve seen my father walking from one village to another with his patachitras and singing songs. In return he received a handful of grains, some lentils and at times a seasonal fruit. He was eking out a livelihood,” recollected Chitrakar. “Rather than follow the family tradition I learnt to stitch clothes and made a living as a tailor for 10 years.”

So what made Anwar Chitrakar and other patuas embrace their traditional art again?

Decline of the patua art

The art used to flourish in Naya village in Pingla block, though a few in Birbhum, Bankura, Nandigram and Chandipur practised it.

Unusually, every patua has two names – one Hindu and the other Islamic. Their diverse repertoire includes tales from Hindu mythology, tribal folklore as well as Islamic traditions.

But when TV and films became popular, the patuas’ art declined rapidly.

“We were no longer considered as artists but treated as bhikiris (beggars),” said Manoranjan Chitrakar, a patua. The word ‘Chitrakar’ signifies both title and profession.

With no takers for their art, the chitrakars opted for odd jobs or migrated to urban centres in search of livelihoods.

But a few patuas continued their tradition.

Luckily they caught the attention of Banglanatak, a Kolkata-based social enterprise.

How was patua art revived?

“In 2004 there were about 25 patuas in Naya village,” Siddhanjan Ray Chaudhuri of Banglanatak told Village Square. “With no industries around to give jobs, we planned how we could augment their livelihood doing what they knew best – painting and singing. 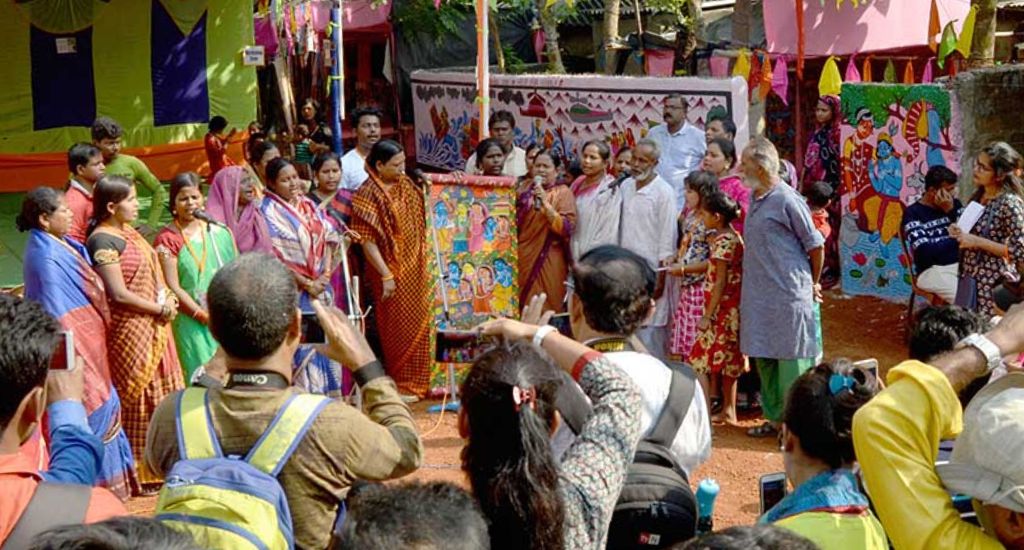 Banglanatak enhanced the skills of the senior patuas and developed that of the youth. They brought in artists from abroad to help the patuas to try new mediums and encouraged growing plants for dyes and colours.

They invited art collectors, connoisseurs and scholars from India and abroad to Naya and helped the patuas participate in art festivals and exhibit abroad. A folk art centre was also established.

POT Maya – the annual patachitra festival the centre organises that draws hordes of tourists – helps the patuas promote and sell their art.

More than 250 artists in Naya practise the art now.

“Besides painting the scrolls the Chitrakars have preserved over 150 pat songs, which were slowly getting lost,” said Manas Acharya, artist and curator, Banglanatak. “Importantly, the locals have started taking pride in their heritage.”

The patuas adapt to contemporary trends

The patuas are now able to make a living through their art, practising it to suit contemporary trends. 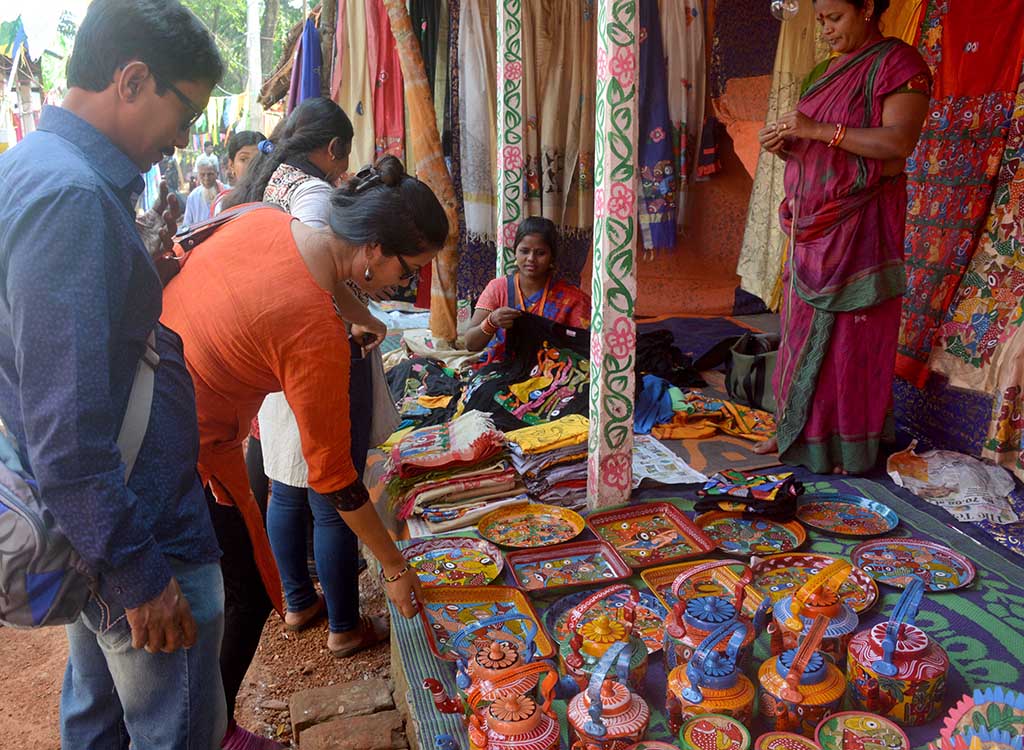 As they have always done, the patuas use their art to convey social messages. Only now the themes are vast – from human trafficking, girls’ education, rural elections, tree protection and female infanticide to AIDS – the artists cover them all.

Natural disasters, like the tsunami or cyclones that affect the lives of so many people, also find their way into their canvases.

During the epidemic, the art form was used to raise awareness and deliver crucial messages in rural Bengal. Veteran artist Swarna Chitrakar’s patachitra became popular, getting good reach and impact.

Naya is now a tourist attraction. The village is like a living museum with the walls painted in vivid colours – every courtyard an art gallery and the patuas busy painting or humming songs. 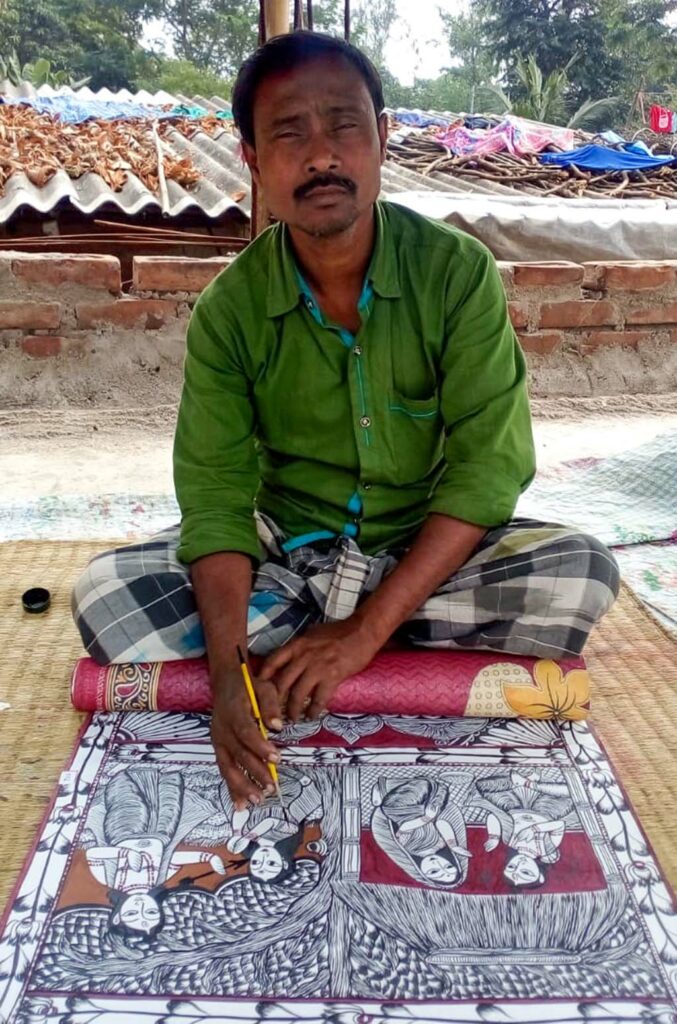 “They have brought international fame to Naya and recognition to their art. They’re entrepreneurs in their own way,” said Bishwaranjan Chakraborty, development officer of Pingla block, under which Naya falls.

Nearly two decades ago, the patuas lived in mud houses.

“Most have pucca houses now. The road to the village is paved and guest houses for tourists have come up too,” Chakraborty told Village Square. Migration is a thing of the past. Even youngsters have taken to pat making with renewed vigour since there is a ready market for their products.

With increasing demand, all the members of the community, especially women, are taking up the art.

“We paint only for a few hours mid-evening or after dinner after finishing household chores,” said Swarna Chitrakar’s daughter Mamoni Chitrakar, who has conducted workshops at the Smithsonian Institute and whose 9 feet long scroll on the pandemic was brought by a London collector for Rs 45,000.

Local art galleries may not have shown interest in their pats (paintings), but the patuas have never been short of assignments.

Several are working on a mural at the West Bengal tourism office, painting puja pandals or setting up stalls at Paramparik Karigar craft shows.

Hasir Chitrakar, son of Manoranjan Chitrakar, was giving the final touches to a huge mural on the walls of the Pingla police station.

Now Pingla has a cooperative called Chitrataru Collective with more than 300 artists.

It creates better opportunities for its artists and works for the development of the village as a whole. It has even bagged a GI tag for their art form.

The lead image at the top of this page shows patachitra art on a pen stand, as the patuas adapt to contemporary trends and use their art form on utilitarian items (Photo by Lupaava Store, Unspalsh)

Hiren Kumar Bose is a journalist based in Thane, Maharashtra. He doubles up as a weekend farmer.

This article first appeared in Villagesquare.in.