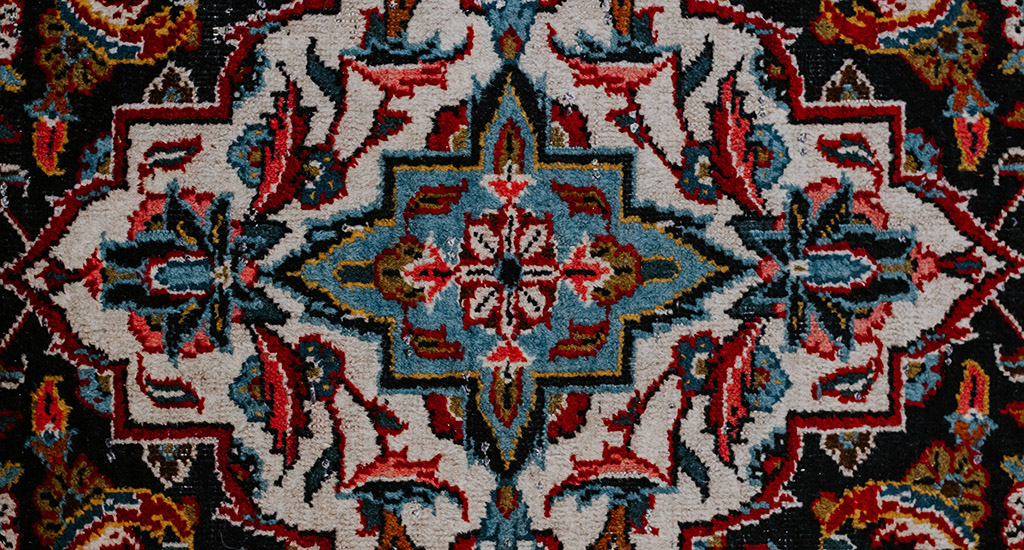 On a cloudy evening, 33-year-old carpet maker Abdul Rahim Khan was busy helping his wife milk their cow when he received a call from one of his carpet dealers who needed to meet him immediately.

Sensing his urgency, the young artisan of Shunglipora village in central Kashmir’s Budgam district hastily walked two kilometres to the dealer’s home with no idea of the exciting news that awaited him.

For it is not every day that a local artisan is chosen to make a handwoven carpet for his country’s grand new parliament building. Those hands with artistic skills that had just been milking a cow were now urgently needed to give shape to beautiful carpets that will adorn the new parliament of the world’s largest democracy no less.

Carpets for the Parliament

Artisans in Shunglipora and a few other villages near the lush green Tosamaidan meadows are now busy with their looms, giving the finishing touches to the carpets. They have all been commissioned to supply handwoven carpets to Parliament House in New Delhi’s Central Vista.

Like a few other artisans, Abdul Rahim Khan could not believe the news for a moment. Though a school dropout, he knows the importance of the country’s Parliament House.

Khan is one among the few craftsmen making carpets for New Delhi, but this is the first time he will know exactly where his carpets will be laid.

“I have woven more than hundred carpets during my 20-year career. Where those have been used, I have no idea. But this time I feel really excited that my art will get showcased at such an important place,” exclaimed a visibly excited Khan. 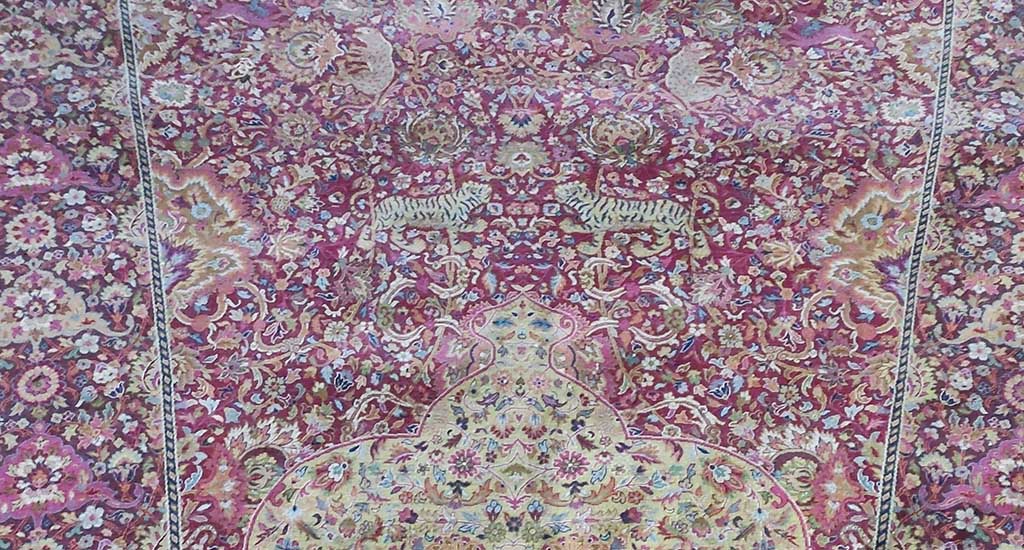 His siblings, 27-year-old Tariq Ahmad Khan and 29-year-old Reyaz Ahmad Khan, are helping him run the loom. Sometimes a woman of the house helps when the men take a break. It is a family effort to weave the beautiful pieces on time.

The carpets are woven in the famed Kashmiri design called shikaar. Known as the traditional design in the local carpet industry, shikaar depicts jungle life. The images of lion, leopard, deer, elephant, peacock or birds are portrayed on the frame.

“They wanted these carpets to be masterpieces with traditional designs. So we chose this,” said Qamar Ali Tahiri, CEO of Tahiri Carpets, referring to one of the finished carpets portraying a leopard in the jungle.

The artisans are using a combination of 12 colours – ranging from red and orange to blue and green – to portray the animals and the scenery.

“I remember dyeing the thread dark red to portray the blood around deer for a scene on one of the carpets,” Qamar Tahiri told Village Square. 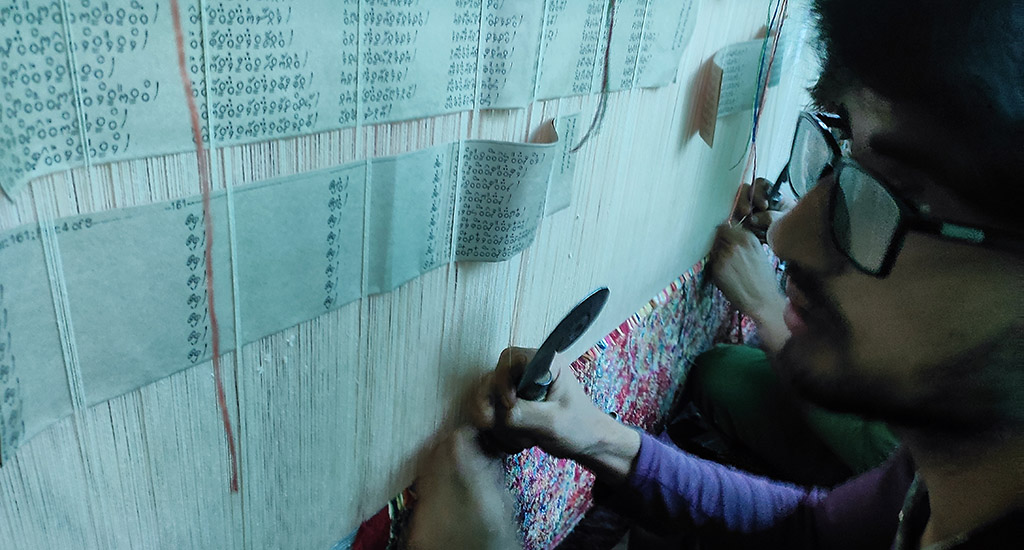 One of the carpets covers an area of about 90 square feet – 11 feet in length and 8 feet in breadth – made with silk-on-silk, which means both the threads as well as the knots are made of silk. There are 288 X 288 knots in one foot length of the carpet, according to Qamar Tahiri. This knot-density makes Kashmiri carpets unique.

Designed and destined for the Parliament

It all started in October last year, when 62-year-old local carpet dealer, Ghulam Mohammad Khan Tahiri who owns Tahiri Carpets, sealed a contract with a Delhi-based company for making the parliamentary floor coverings.

“They provided the dimensions and shape of the carpet. Choosing the actual traditional designs was left to us,” said the senior Tahiri, a veteran carpet dealer with over 35 years of experience.

The Tahiris have made carpets for five-star hotels and big corporate houses before. 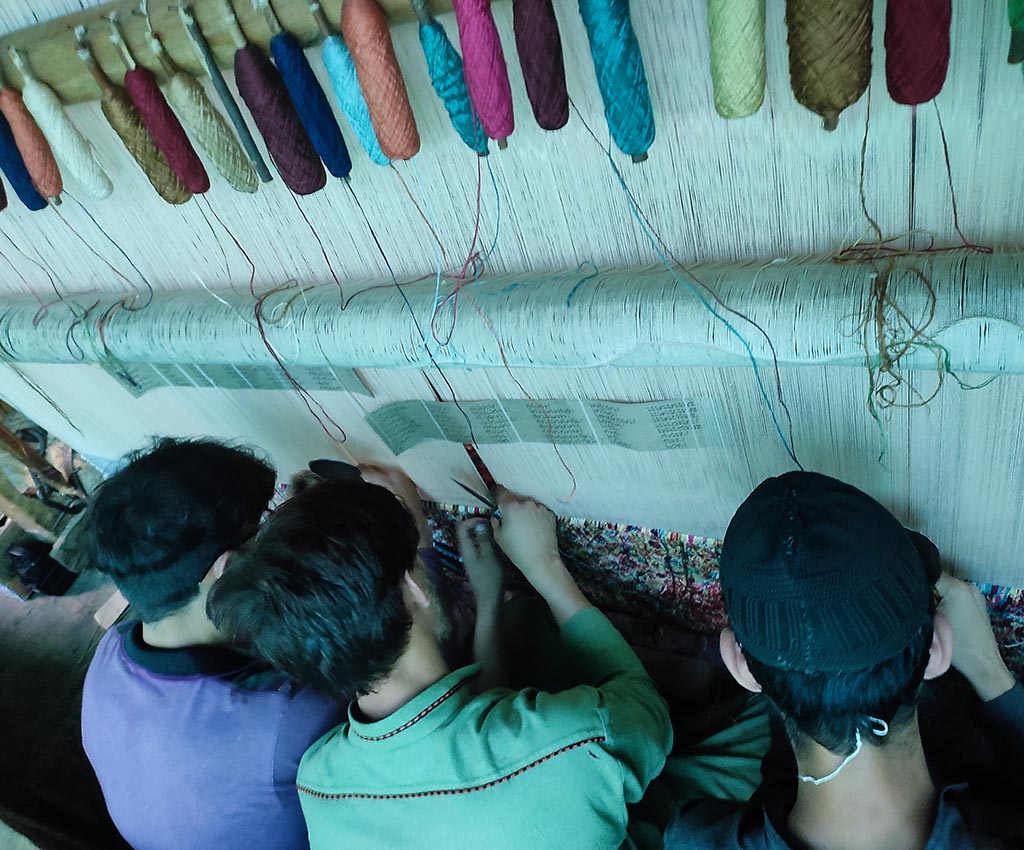 “But as soon as I learnt about this order for the Parliament, my father and I discussed everything down to the minute details,” said Qamar Tahiri. “For this esteemed project we sourced super quality silk from Delhi.”

“The second and toughest thing was to select 12 master craftsmen out of about 120 craftsmen working with us for this symbolically important assignment,” said Qamar Tahiri. The timeline was also a concern, as usually, during summers many craftsmen take up farming or other labour work, working on carpets in the winters.

“So we had to motivate the craftsmen to work during summers too, so that we could complete on time,” said Qamar Tahiri.

It is a full-on assignment. But as the carpets are about to decorate the building that houses the highest constitutional institution in India, the artisans are upbeat.

Many are hopeful that this symbolic development will augur well for Kashmiri handicrafts – the carpet industry in particular.

According to Shaheena Akhter, a teacher whose family is associated with the industry, projects like these have the potential to promote local handicrafts.

“Because they are an encouragement for the artisans and open more marketing avenues for local crafts,” she told Village Square.

With handicrafts from the valley coming into limelight once again, the Khan siblings are also upbeat and hopeful this will bring more opportunities.

“For me more work means a sustainable livelihood and that is what we long for,” said Reyaz Khan.

The lead image shows a representative image of a carpet, even as artisans in Kashmir are making their famed carpets (Photo courtesy Ashkan Forouzani, Unsplash)

This article was first appeared in villagesquare.in.