He could be on the list of most-wanted guerrilla warriors if “bombing” barren land to sow seeds of green is ever labelled an extremist transgression.

Freelance journalist and self-trained ecologist Subranshu Satpathy has more than 100,000 “bombings” under his belt, a feat achieved over 13 years.

Satpathy, from the Dhenkanal district of Odisha, began his revolutionary trespass in 2009 in his war against climate change and the devastation wrought by it.

He was a young conscript of 21 when he took up arms, vowing to convert land shorn of vegetation in the countryside with greenery.

The potent weapon in his arsenal is an improvised device—a “seed bomb.”

What are the roots of seed bombing?

Seed bombing has a Japanese origin, called Tsuchi Dango or “earth dumplings,” which are basically balls of seeds mixed with compost and clay and then thrown randomly across the land to let them germinate and grow, and cover the landscape with vegetation.

I used to take saplings on my motorbike to plant. I couldn’t carry much, so I went to my father and asked him what to do
The practice is ancient, but reborn after Japanese natural farming pioneer and microbiologist Masanobu Fukouka propagated it in 1938.

“I only remembered one incident when my father mentioned plants growing from seeds. I used to take saplings on my motorbike to plant. I couldn’t carry much, so I went to my father and asked him what to do,” Satpathy told Village Square. 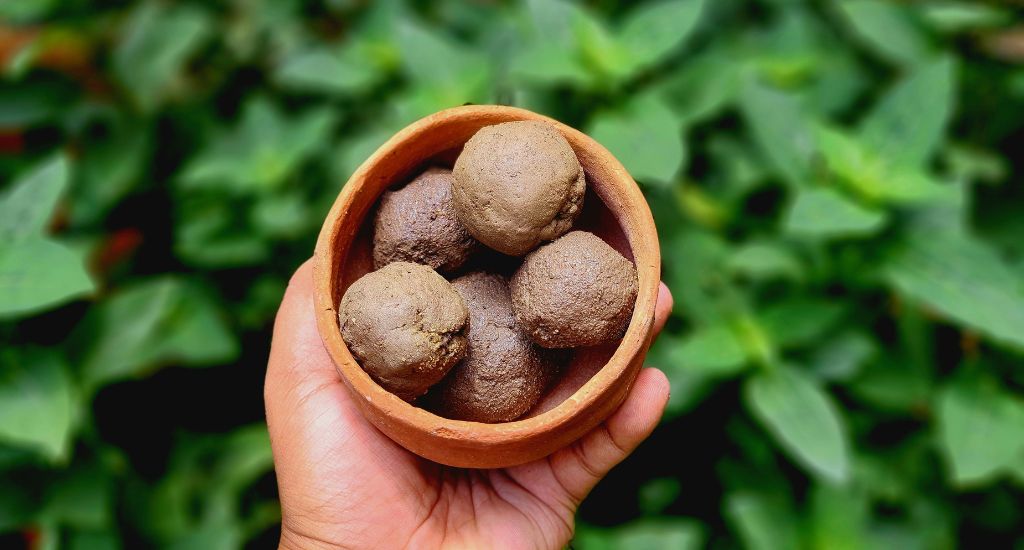 Satpathy had never heard of it before until his father, a retired forest official, gave him a low-down.

Sathpathy grew up surrounded by nature as the family lived close to wildlife sanctuaries or parks where his father was posted in the 1990s.

Once on a trip with his father, their car broke down in the middle of nowhere and it took time to fix it. He was hungry and his father gave him a guava. He nibbled the fruit and threw out the bits with the seeds.

“One day a guava tree would grow where you threw the seeds,” his father had said.

The words stayed with him and years later, he is using “seed bombing” to increase rural Odisha’s green cover. He used his father’s experience and information from the internet to prepare seed balls, mostly from the jamun fruit growing on trees along roads.

Because moist seeds show a tendency to break on impact, most of the seeds are sun-dried before they are mixed with manure and clay and then rolled into a ball.

Why do children make great seed-bombers?

“Seed bombing” is easy, effective, quick and cheap. But to scale up the operation, Satpathy needs resources.

As he struggled with the thought that no one’s going to dirty their hands in dung and clay, the answer appeared from nowhere: kids.

“Children. Those in the villages. They play in mud and water, climb trees and pick fruits. Some help on how to prepare seed balls and we are good to go,” the 34-year-old said.

Satpathy began workshops at government schools, educating children about the importance of trees and how to grow them from seed balls. He has many “little revolutionaries” on his watch now with his crusade spreading to urban centres as well.

Time is of the essence in seed bombing
Though the efficacy of “seed bombing” has been questioned, Satpathy has complete faith in the technique.

It’s difficult to monitor their growth. I usually gauge it when a larger patch of uncultivated land becomes green. In villages the excited children keep track.

But is is important the bombing runs are completed just before the monsoon.

“We disperse the seed balls in the wild. It’s difficult to monitor their growth. I usually gauge it when a larger patch of uncultivated land becomes green. In villages the excited children keep track,” he said.

Satpathy has even tried “seed bombing” from drones, taking a cue from a similar aerial reforestation method in Rajasthan. But drones cost money.

A partridge in a pear tree

Satpathy is also a documentary film-maker, making movies on the environment, some of which were screened at the Dadasaheb Film Festival.

He wants children to know more about their surroundings. About nature.

“Young kids are so distant from the environment and its concerns,” he said. “I grew up amidst nature and so I know. It’s important to introduce environmental studies with innovative techniques to let children connect with nature. Children can be the best change-makers.” In the hot summer months, he gives villagers clay water pans for birds. He grew up seeing his mother do this and he wants others to replicate it.

“Dehydration is a common cause of bird deaths in the dry season. Steel and plastic containers heat up, so clay pots are preferred,” he advised.

With the world on “a highway to climate hell with our foot on the accelerator″ – the ominous words of the UN chief before this year’s climate summit– lone-wolf crusaders like Satpathy may not check into the overall statistics.

But history shows that such individual efforts often change mindsets and even move mountains.

The lead image at the top shows Subhransu Satpathy, a journalist, has disbursed over one lakh seed balls since 2009 (Photo by Tazeen Qureshy)

This article was first published in villagesquare.in.