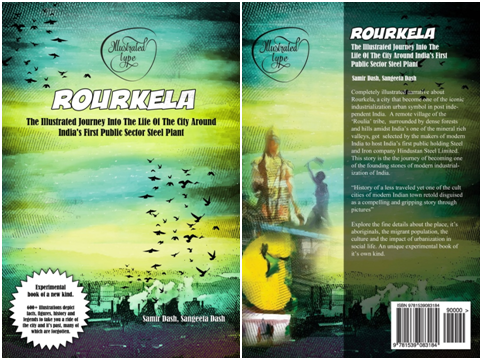 Typically comic books deal with a fictional subject or any subject with a light theme. Similarly the travel book written about a place tries to present most current geographical and cultural facts.

The latest book on Rourkela written by Samir Dash and Sangeeta Das is an experiment combining both forms of writing. ‘Rourkela – The Illustrated Journey Into The Life Of The City Around India’s First Public Sector Steel Plant’, is a history-cum-travel genre in comic book format, with a complex subject that touches upon many dimensions of the place in context of Indian history.

It is a book that promises to fascinate the young and the old with equal ease with over 600 evocative and vintage type black and white illustrations, thereby proving the saying “A picture is worth a thousand words”.

The book is significant for many reasons. What is most striking about the book is that it addresses the diversified aspects of the city of Rourkela through a variety of social, cultural and industrial-growth prisms – the book flashbacks through time to highlight how different places of the city evolved through time.

The growth and decline of cinema halls, regional schools, institutions like NIT and ITI, market places, temples, stadiums and cultural centres, giving the reader a nostalgic view of the place.

On his visit to the city, Prime Minister Narendra Modi described Rourkela as “Mini India”, due to its true cosmopolitan nature, encompassing people from different walks of life from different parts of India.

The book in different blocks of thoughts, explores this aspect, representing the growth of education, sports, cultural dimension of life in different phases of time.

Along with it, it includes narrations of the mythological references of Vedvyas, the soul of religious faith of the city, where it is believed that the epic The Mahabharat was written and in different shades of time, how the present temples came up in the area.

The book ambitiously covers a lengthy time period – predominantly 300 years spanning across both the side of Indian independence along with some occasional the references to even older times beyond a few thousand years.

The narrative is developed through a rich tapestry of archive of records and factual sources, as it also explores the lives of people who came to this remote place from different parts of the country.

From the mass of material that the book has collected, fascinating stories emerge – starting from how aboriginal cave men were living 30,000 years ago reflected through cave arts around region, the Parmar rulers, the references in Gibbon’s and Hiuen Tsiang’s writings, through the period when the railways revolution started in India during the British Raj.

It has also the detail about the tribal uprising under the leadership of Kalo Madri as well as Amco-Simco killings (in which British troops fired on an assembly of unarmed tribals as in Jallianwala Bagh massacre), Indian independence, formation of Odisha state, establishment of Hirakud Dam, coming up of the Rourkela Steel Plant, till the modern time tagging the events of socio-cultural evolution and the smart city initiatives of the present day government led by the Prime Minister Narendra Modi.

The book depicts vividly the life of the city through different phases of time, starting from the mythological time with the references in the Mahabharata epic through the pre and post-Independence era and steel and iron industrialization, till the present day when a new phase as a Smart City.

The authors also attempt to bring into light how the socio-cultural life of the tribal natives of the area got impacted by industrialization.

While historically, the book takes the readers into a ride of time through which the reader can witness how tribal life got affected by the industrialization, at the same time, the book also reflects, how Rourkela is a stereotype of the post-independent Indian industrial launchpads, which witnessed remote rural life going for a toss and giving rise to urban issues of migration, cultural displacement along with the cosmopolitan growth.

The industrial revolution and the establishment of first steel plant, which though is a matter of pride for the country, were not being helpful to make the native tribal people’s lives better.

With progression it shows how the fight for justice by the local natives, has been continuing even today through protests against the issues like land settlements and displacement of the aboriginal and environmental and social impacts by the industrial growth in the region.

The design of the book, not least the vintage looking wonderful woodcut type illustrations that fill its pages, is central to its appeal. While some of the images present a nostalgic view of the past moments of the city – the construction of the steel plant, the visit of Jawaharlal Nehru, the inauguration of Hirakud Dam and the first blast furnace of the plant.

Through pictures it makes it easy for the readers to imagine the time in different periods of the region. Be it the old-time hangout of the Rourkelite’s crossing of hill to the main market area to watch movies like “Junglee” or the 1980s middle-class man carrying his whole family on a bicycle, everything has come alive in the readers mind through flickers of images.