He was undergoing treatment at Sriram Chandra Bhanj Medical College and Hospital at Cuttack for past several days.

Here are 10 interesting facts about the veteran public figure.

1. He was born on 26 November 1926 at Bhanaragarh village in the Puri district, during the country’s freedom movement and was groomed by the ethos and values of that struggle.

3.He hailed from a zamindar (landlord) family and abhorred all that was associated with the exploitative practices. He rebelled against his own family by granting land rights to the farmers who were tilling the land of his family.

Deeply influenced by Mahatma Gandhi and Ram Manohar Lohiya he remained in the forefront of the socialist movement and struggled for reconstruction of Indian society along socialist principles.

4. It was he who unfurled the national flag in Ravenshaw College by bringing down Union Jack in Peru dependent India and became a hero for the youth of that era.

5.His role in fighting for the rights of the subjects of the princely state of Odisha would be written in golden letters in history. He was the only leader from Odisha who had a national stature based on values and statesmanship as opposed to power politics.

6.It is instructive to note that in the late 1960s he was Deputy Leader of Opposition in Lok Sabha. It was a great honour for Odisha that a leader had occupied such a high post at the national level in the formative stages of our independence.

7.His high stature and standing in public life of India brought him many laurels and he was made Health Minister in Morarji Desai cabinet.

8.During that period he promoted the cause of indigenous medicine. The crowning achievement of his career in public life was his unanimous election as Speaker of ninth Lok Sabha when V P Singh was the Prime Minister.

9.The day he assumed office as the Speaker he came out of Parliament House after getting felicitated by Members cutting across party lines and when he saw a Mercedes car waiting to take him home he refused to use it.

10.The staff of Lok Sabha was stunned that Shri Rabi Ray decided not to use that luxurious car which his predecessor Shri Balram Jhakar specially obtained for use as the official car of the Speaker of Lok Sabha.

11.Ray simply asked for an ordinary ambassador car and that car was used for his official work during his tenure. It is stunning to note that he never had any bandh gala dress to take oath as Speaker of the Lok Sabha.

With his dhoti and kurta he looked very dignified and commanded respect and admiration from all. His role as a Speaker was historic. 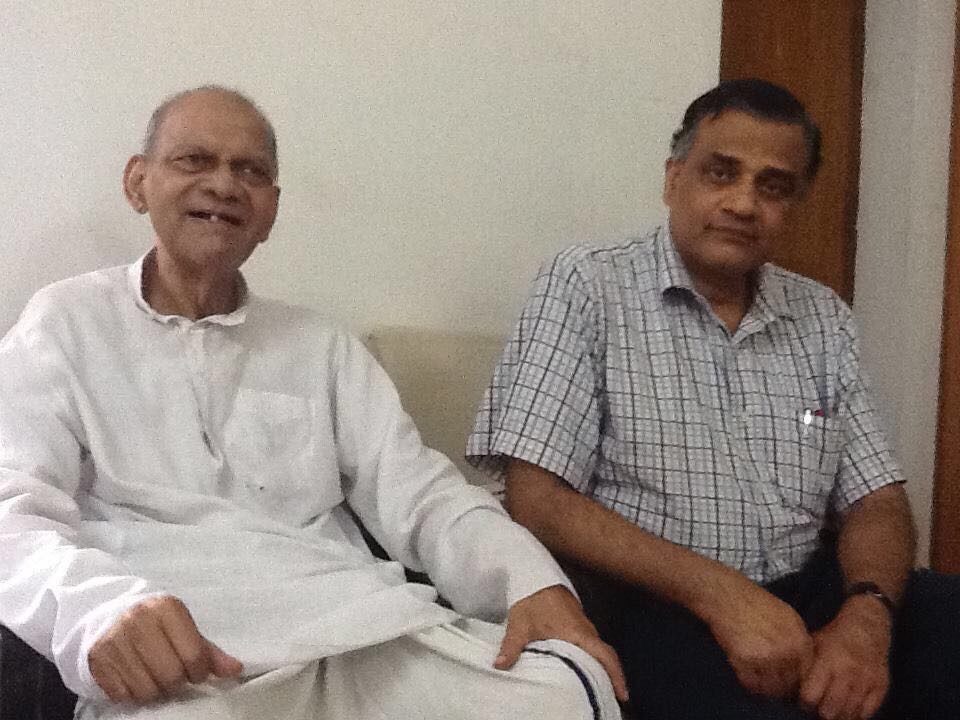 Rabi Ray with the writer

His decision to admit that motion was challenged in the Supreme Court and the apex court ruled in his favour. He was thus vindicated by the highest judiciary of our country for his role to clean higher judiciary of corruption.

13.When the second impeachment motion against a judge of Calcutta high Court was admitted in 2009 I wrote an article in the Samaja, leading Odia newspaper, outlining the role played by Rabi Ray in admitting the first impeachment motion.

14.When some Lok Sabha MPs belonging to theJanata Dal formed a new group to support Chandra Sekhar to become Prime Minister he gave a ruling and declared them as unattached.

His ruling was not liked by those Members.

Subramanium Swamy was Law Minister at that time and he came to Speaker’s chamber and asked Rabi Ray to withdraw the ruling failing which he would arrest him. Members cutting across party lines criticised Subramanium Swami and wanted his dismissal.

That particular incident was narrated by President R Venkatraman in his memoirs “My Presidential Years” and he criticised Shri Swamy for his threat to Shri Rabi Ray.

15.Today we have so many Department Related Standing Committees of Parliament to examine the various Departments of the Government. Such Committees were first introduced in the U.K. House of Commons in 1979.

16.Such Committees were called as the parliamentary innovation of twentieth century. It was Rabi Ray who decided to introduce such Committees in Indian Parliament in 1989.

The successful functioning of such Committees in holding the Government and particularly the bureaucracy to account owes a lot to Rabi Ray’s historic initiative in 1989.

18.When he was Speaker I met him and told about the misdeeds of the then Secretary General of Lok Sabha Subhas Kashyap. He instructed him to undo those misdeeds.

When he refused to do so he sacked him. Even Rajiv Gandhi supported Rabi Ray on that issue. Later he treated his sacking order as an order to retire him from service and thereby enabling Shri Kashyap to get pension and other benefits.

19. During the emergency, he along with many other opposition leaders was arrested and put behind bars in Amabala Jail. While in jail he started reading Collected Works of Mahatma Gandhi.

20.After his retirement as Speaker of Lok Sabha I came closer to him. He was the first person in my life who asked me to read Mahatma Gandhi’s Collected Works.

21.I started reading a bit. He always encouraged me and admired my work. I was greatly inspired by him. He was one MP from Odisha who always spoke in Hindi in both Lok Sabha and Rajya Sabha. He did so in tune with the socialist philosophy which mandated every socialist leader to use national language.

A simple man with rare dignity and charm he was respected across the country for high standards of character and conduct.

In his passing away the country has lost a man who led value based life and had the vision to reconstruct India and Odisha by employing the ideas of Mahatma Gandhi, Ram Manohar Lohia, Dr. B R Ambedkar, Netaji Subhash Chandra Bose, Khan Abdul Gafar Khan and Utkalmani Gopabandhu Das.

I pay my tribute to him and hope that his legacy would endure.

*Sahu is a writer and works as a senior joint secretary in Rajya Sabha. He is a former press secretary to President K.R.Narayan.