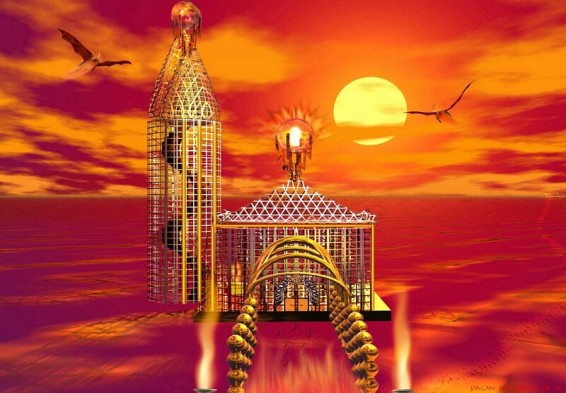 Parsis are worshipers of fire. Especially on Navroz, they keep a burning fire surrounded by water and wheat.

A Science Fiction Fire Temple of the future where the Zoroastrian holy Fire burns forever and the holy Sun shines above. The Fire and Sun bless the Fire Temple. Pic: http://iranpoliticsclub.net/culture-language/mythology1/

However, the term Navroz is used only in India as the first day of the Persian year. The festival being celebrated for over 3000 years now is better known as Nowruj or Nooruj in rest of the world.

Greeting the Parsis, President Pranab Mukherjee said: “The Parsi community of India has played a major role in the building of our nation and contributed immensely to development of our country in various spheres, including industry, commerce, trade and education.”

In his message, Prime Minister Narendra Modi said: “Navroz Mubarak to the Parsi community. May there be an abundance of happiness, success and good health in this coming year.”

Here are 10 facts about Navroz and the Parsi community of India that you might like to know:

1. Parsis are worshipers of fire. Especially on Navroz, they keep a burning fire surrounded by water and wheat. This symbolises purification by fire and ushering of wealth in forms of wheat.

2. The Navroz menu comprises seven dishes, the names of which start with ‘sh’ and ‘sa’ symbolising the creation of the earth in seven days.

3. Navroz gifts include dried fruits, nuts and grains to symbolise abundance and survival.

4. On this day, the main table is set up with The Gathas, sacred texts of the Zoroastrian faith, lamps or candles, a ceramic plate with sprouted wheat or beans, a small bowl with a silver coin, painted eggs, sweets, rosewater, flowers and a goldfish in a bowl to represent prosperity, wealth, productivity and happiness.

5. Parsis evolved from the Indo-European branch of Aryans.

7. On their arrival to India, Parsis settled at Sanjan town of Gujarat. But it was in 1790 when famine struck the state that a huge number of Parsis came and settled in Bombay.

8. Parsis have more females compared to males in their community – 1050 females per 1000 males, much higher than India’s average of 933 females, according to 2001 Census.

10. Parsis are a dying community. As per the National Commission for Minorities, at present there are only 63,000 Parsi people in India.

The demographic trends suggested by the Commission project that by 2020, there will be only 23,000 Parsis left in India and the “community” will become a “tribe”.