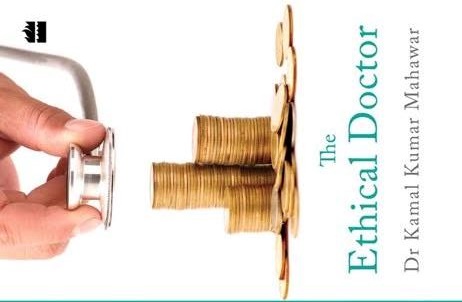 The Ethical Doctor is a must read for all, especially doctors, many of whom seem to have even stopped feeling pangs of conscience these days.

The sorry state of healthcare in India is quite well known.

Several shocking incidents recently across the country such as a tribal man in eastern state of Odisha walking 10 km with his wife’s body on shoulder because he could not afford a vehicle or the sick son of another man dying on his shoulder as he carried him to hospital on foot in the absence of ambulance in northern state of Uttar Pradesh have further damaged the reputation (or notoriety) of the health system.

It seems the ruling establishment has already given up on the public healthcare system catering mostly to the poor in the country. The data speak for themselves.

In the last five years, the average annual health spending of India’s 17 larger states is just 4.4%, against over 17% in USA. India, which has a population of over 1.25 billion, has around 7.40 lakh registered doctors – one doctor for 1,675 people, against the recommended one thousand people.

The ill-equipped government hospitals are grossly understaffed. A large chunk of rural hospitals are run by pharmacists because not wishing to work in remote areas doctors remain absent most of the time.

The so-called better equipped private hospitals are no better. They may be providing better healthcare but can also turn a middle-class man pauper overnight with their inflated even fleeced bills.

Here a majority of the doctors are like predators in search of prey because their remuneration is linked to targets of bringing in patients set by their hospitals.

We have also heard about how the pharmaceutical companies fund the yearly foreign trips of doctors and their families for helping the formers by recommending their drugs.

Many observers have noted that the prevailing scenario with a weak government healthcare system and predatory private one has the dangerous potential to turn even the best and well-meaning doctors into looters in the process of advancing their careers. This view is reinforced by the latest book on the medical profession, ‘The Ethical Doctor’. Authored by Kamal Kumar Mahawar, himself a practicing doctor, the book is indeed a scathing treatise on the Indian health care system plagued by scams and malpractices.

The book chronicles in details how doctors exploit the vulnerable and poor, earn their commission from needless tests and treatments and contribute to the ever-growing fortune of big drug companies.

Mahawar does not also spare the Medical Council of India for its failure as a regulatory body meant to usher in ethics, fairness and transparency in the healthcare system.

In fact, the second chapter of The Ethical Doctor starts with a strong comment by another doctor, Rajendra Malose, who is quoted as saying in The Indian Express’ Pune edition (February 26, 2015): “Doctors get Rs.30,000-40,000 just for referring a patient for angioplasty.”

Then Mahawar goes on to write: “Your doctor refers you to a diagnostic facility, specialist or hospital for some tests. What would you think? That your health demands it.

“You would think it is in your best interests; you need the test or the treatment, and people you are being referred to are the ones best equipped to help you.

“Presuming that such referrals are only protecting your interests is precisely that – a presumption. 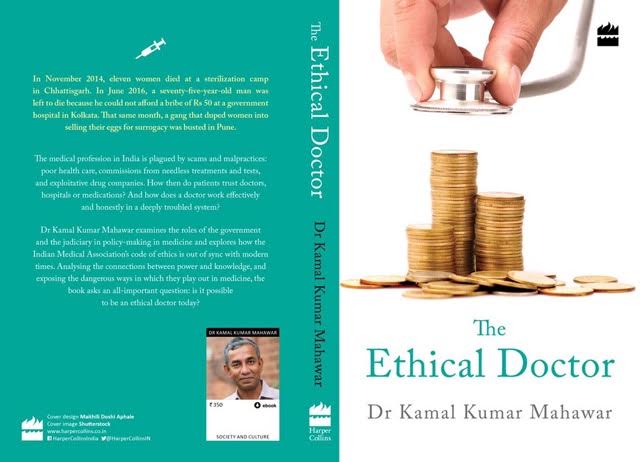 “In reality, your doctor may have a vested interest in referring you to another doctor or treatment facility – he may earn a proportion of the money you spend on these tests and treatment as commission.

“This practice in our healthcare system, where the referee of a patient pays out to the referrer for sending him ‘business’, is known as ‘cut practice’, or simply ‘cut’ or ‘referral fee’.”

This practice of such cuts is rampant in India’s healthcare system despite a clear ban on it by the MCI, which lacks resource and will to prosecute erring doctors, hospitals and pharmaceutical companies.

But is it not the case with every sector in India where corruption is all pervasive? Why should corrupt practices in medical profession be taken more seriously?

Mahawar provides the right answer to it in his introduction to the book. Unlike a lawyer, teacher or civil servant, he says, a doctor deals with the direct physical pain and suffering of a fellow human being that a disease brings.

“It is as if an illness is an act of god and doctors are the only humans who can help alleviate it. Historically, the air of mystery surrounding health and diseases may also have contributed to placing doctors on a pedestal,’ he writes.

Mahawar has come up with several suggestions in the book for course correction such as radically reforming MCI, effective clinical establishment regulators and ushering in reforms in private hospitals where doctors’ emoluments are directly connected with meeting targets to bring in patients.

One only wished the book had a full chapter if privatisation has led to complete collapse of the healthcare system in India.

Also, another chapter on how the healthcare system in Britain, of which Mahawar is a part, is different from that of India would have thrown light on how a poor country like ours has pushed a majority of people into the jaws of corporate medical sharks.

Nevertheless, The Ethical Doctor is a must read for all, especially doctors, many of whom seem to have even stopped feeling pangs of conscience these days.