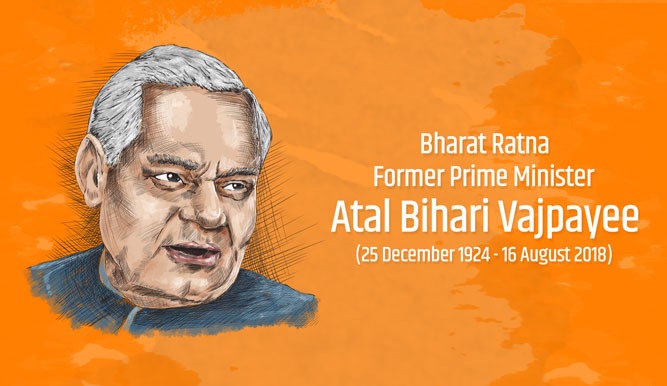 But he resigned after 13 days after he could not win the majority. Between 1998-1999, he became the PM for a second time.

He stepped down after 13 months after the then AIADMK supremo J Jayalalithaa withdrew her support from the coalition and the government collapsed. His longest term as the Prime Minister was from 1999-2004.

2. The master orator is perhaps the only parliamentarian in Indian politics, who was elected from four different states – Uttar Pradesh, Delhi, Madhya Pradesh and Gujarat.

3. It’s strange but true. Atal Bihari Vajpayee and his father Krishna Bihari Vajpayee were classmates at DAV College, Kanpur. Seeing him take up law, his father apparently became very interested in the subject and enrolled himself.

4. Though he showed interest in communism for sometime during his early days, Vajpayee found his heart with BJP’s patron party Rashtriya Swayamsevak Sangh (RSS).

He loved his party so much that despite his father, who was a government employee, not allowing him to wear the RSS Khakhi pants and his sister throwing them away, he used to wear them frequently outside his house, openly showing his support to RSS.

5. He was one of the few leaders who was hugely respected by opposition party colleagues. He was the first non-Congress Prime Minister to serve a full 5-year term in office.

6. It was not for nothing that he was one of the most popular politicians of India. In 1984, while campaigning in Gwalior, Vajpayee asked the people who attended the rally to vote for Congress and show that one cannot escape after assassinating “our PM” (referring to the assassination of Indira Gandhi).

That year he lost to Congress candidate Madhavrao Scindia, but it was his last ever defeat from Madhya Pradesh.

7. He gained another level of respect among his political peers when in 1977, as the External Affairs Minister of India, Atal Bihari Vajpayee gave a speech in the United Nations (UN) General Assembly in national language Hindi. It was the first time a politician gave his speech in Hindi at the global forum.

8. It was during Atal Bihari Vajpayee’s tenure as PM that India became a nuclear state. The country successfully conducted the Pokhran-II where a series of five nuclear bombs were blasted at the Indian Army’s Pokhran Test Range in May 1998.

It was Vajpayee who called a press conference shortly after the test explosions and told the nation that India is now a “full-fledged nuclear state”.

9. Everyone knows that Vajpayee was a bachelor all his life and that he adopted a girl child Namita. But very few know that Namita’s birth mother is Mrs Rajkumari Kaul. The media often tried to romantically link her with the former PM to stir up a controversy.

10. A young Vajpayee was an ardent follower of Shyama Prasad Mookerjee, the founder of Bharatiya Jana Sangh, which later became the Bharatiya Janata Party.

In 1953, Mookherjee launched a fast-unto-death protest in Kashmir against the system of carrying a permit for entering the state and the ill-treatment of Indians visiting the state.

Vajpayee stayed close to him throughout the protest. Mookherjee was successful in achieving what he wanted, but died weeks after due to weakness. It came as a shock for a young Vajpayee.