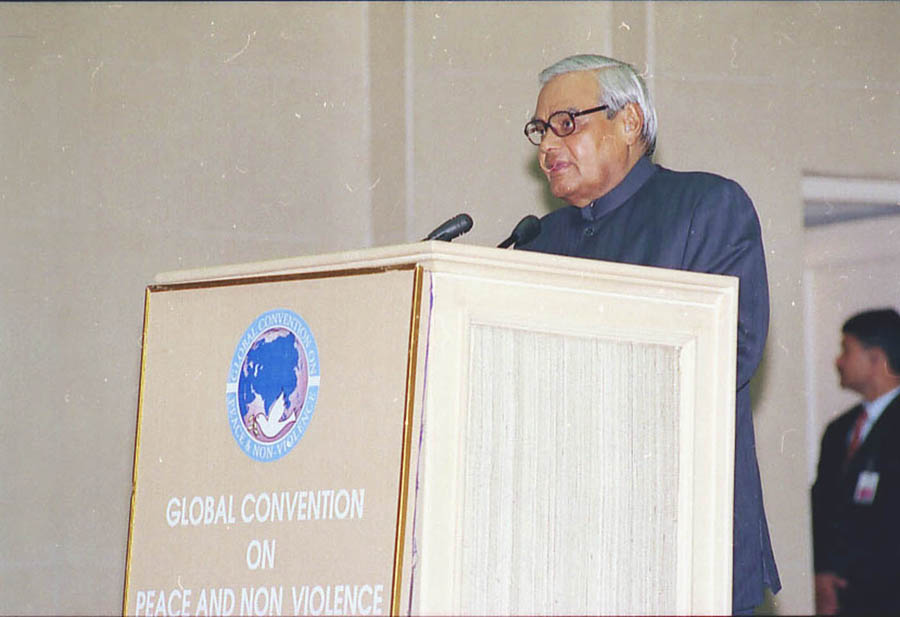 Former Indian Prime Minister Atal Bihari Vajpayee passed away after a prolonged illness at All India Institute of Medical Sciences (AIIMS), Delhi on Thursday (Aug 16). He was 93.

He was reportedly a diabetic, was surviving on one functional kidney and developed dementia after surviving a stroke in 2009.

According to an official statement, Vajpayee’s condition deteriorated over the last 36 hours and he was put on ventilator support.

Following the death of Vajpayee, the world joined India to mourn the death of a leader who gave the country a new political thinking.

Meanwhile, the Centre has declared a 7-day national mourning; the national flag will be flown at half mast for seven days across India.

Jharkhand and Madhya Pradesh government have also declared seven-day mourning and public holiday on Friday (Aug 17) as a mark of respect to Vajpayee.

Meanwhile, Vajpayee’s mortal remains has been kept at his Krishna Menon Marg residence and will remain there till 8.30 am on Friday (Aug 17).

He will be taken to the BJP headquarters where people will be able to pay their last respects to him 9 am onwards, confirmed party chief Amit Shah.

His last journey to Delhi’s Vijay Ghat will start at 1 pm. He will be accorded a state funeral at 4 pm.

Here is how the nation and the world mourned the death of its beloved leader:

We have lost our inspiration. We have lost an Atal Ratna. The personality of Atal Ji and the sadness due to his demise can’t be described in words. He was a wonderful orator, a prolific writer and he dutifully served our country. I have lost a father figure today. Atal Ji taught me valuable aspects about Sangathan and Shaasan. Through his leadership and struggles, Atal Ji strengthened the Jana Sangh and the BJP. He took these parties to every part of India. The thoughts, ideals and words of Atal Ji will always remain with us and inspire us.

Extremely sad to hear of the passing of Shri Atal Bihari Vajpayee, our former Prime Minister and a true Indian statesman. His leadership, foresight, maturity and eloquence put him in a league of his own. Atalji, the Gentle Giant, will be missed by one and all.

I am at a loss of words. I have no words to express my grief. He was not only one of India’s tallest statesmen, but my closest friend for over 65 years.

#Tribute : IndianAirForce pays tribute to a great man, a great leader & a visionary – Bharat Ratna Atal Bihari Vajpayee. Its a great loss to the Nation, you will always be remembered as a Great Man. RIP

Today India lost a great son. Former PM, Atal Bihari Vajpayee ji, was loved and respected by millions. My condolences to his family & all his admirers. We will miss him.

He was a different human being, his way of practicing politics was also different. He was very kind-hearted. He used to respect everyone. We had the fortune of working with him in the government. Atal ji was an exceptional gentleman.

All of us who knew Mr. Atal Bihari Vajpayee are saddened to hear of his passing away. He was a great leader with a great sense of compassion and humor. He will be remembered fondly by a vast number of us.

I am saddened by the loss of former PM, Sh. Atal Bihari Vajpayee ji. My condolences to his family and followers.

Odisha Government has announced seven day mourning on demise of former Prime Minister #AtalBihariVajpayee. All public offices and educational institutions to stay closed tomorrow with the tricolour at half-mast.

We are deeply shocked at the sad demise of the former Prime Minister of India Shri Atal Bihari Vajpayee, one of the most famous sons of India. He will be remembered for contributing towards good governance and for highlighting issues affecting the common people of India as well as for regional peace and prosperity.

We mourn the death of H.E. Mr Atal Bihari Vajpayee, a great statesman. His name became an integral part of a whole era in Indian politics. His devoted service to the nation can hardly be overestimated. Mr Vajpayee enjoyed due respect in India and globally.

We knew him also as a poet, a man of knowledge and a true friend of our country, where he is well-known as one of the architects of our long-lasting and time-tested privileged strategic partnership.

Vajpayee was a true parliamentarian. With his death, a vacuum has been created in Indian politics.

A pole star in the sky of politics is no more. The party has lost its guiding star and India has lost a great leader.

Vajpayee ji was a man of great wisdom, tolerance and compassion. He led his party to its first victory in national elections and established the credentials of the BJP to run the central government.

Am deeply saddened. A great loss for India.

India is at a great loss today. Shri #AtalBihariVajpayee ji’s contributions to our nation have been innumerable. Thoughts and prayers go out to his loved ones.

Two losses for India in two days. Atal Bihari Vajpayee ji a great leader and widely loved PM. Had the opportunity of meeting him back in 2004 at his residence.

Atal Bihari Vajpai (1924 – 2018 ) An admirer of my Father’s works and vice versa ; gentle nature, strong fiery in his speeches.

My growing up years were spent under the country leadership of #AtalBihariVajpayee. And so for me, all memories of any prime minister are always compared to him !! He’s going to live forever in our hearts.

My heartfelt condolences to the country, as we mourn the demise of our visionary leader, #AtalBihariVajpayee ji. May his soul rest in peace!