have an invigorating impingement on human consciousness.

It helps them to release the pressure of monotonous tiresome daily duty.

This is the reason that makes sea beaches favorite holiday destination of people.

Beaches are not only sought after for the vacation purpose; people also like to live along the coast line due to enormous benefits.

History stands tall to the testimony to the fact that civilization grew near river banks but economic activities grew near port cities.

In Pre-British India, the coastal state Odisha ascended high on the economic growth curve depending on the international trade via sea route.

The local economy grew by leap and bound bringing new avenues of trade in agriculture, handlooms and handicrafts industry.

Patronizing behavior of local rulers in handlooms and handicraft sectors introduced delicacy in such art forms. 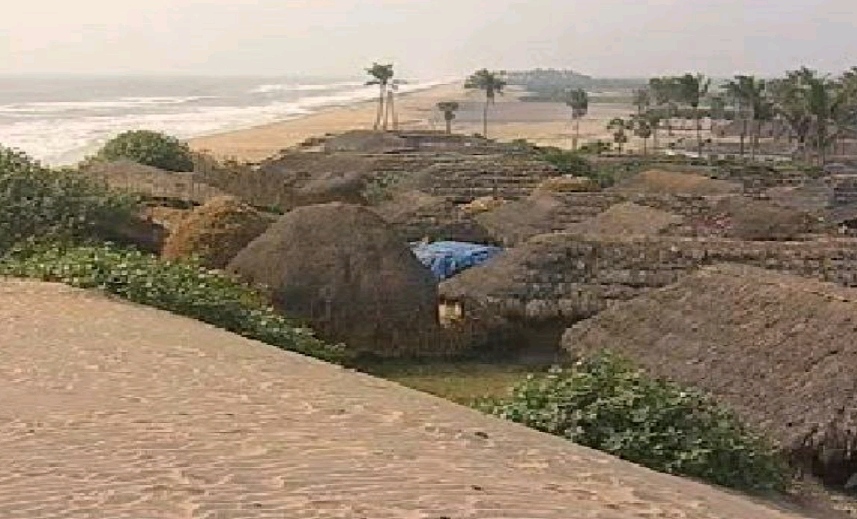 The small trading facility center erected near the beach by the ruler of Kanika kingdom, was to support the food and fuel need of the sailors.

The magnificent Satabhaya beach caught the imaginations of the erstwhile Majesty of Kanika and made him to construct the royal summer palace near the seashore.

Satabhaya, as the name suggest was the conglomeration of seven villages, was a river basin region and had a highly fertile land area.

Locals practiced multiple cropping throughout the year. Inland fishing, animal rearing was the supplementary income of the people.

Natives were living happily there with royal patroness, local deity Panchbarahi temple that used to be attended by women priests only (men were debarred from entering the temple premise) like other coastal natives around globe till the year 1971 cyclone stroke the region.

Since then, the erstwhile respectful and adorable sea became fearsome for the locals.

The horrendous sea from that fateful event of cyclone was making slow progress towards land area engulfing agricultural land and habitation one by one.

Increasing turbulence over sea surface in recent years owing to rise in the sea surface temperature, is increasing the grief of the locals.

The disturbance in sea surface temperature is giving strength to the brine to make in ward progress in Satabhaya region.
The super cyclone 1999 saw loss of another two village to sea.

The sixth village out of seven, the Kanhupur village got completely swallowed by sea in 2011, leaving aside the status of locals as refugee.

Now the last village of the region the Bareipur village, is on the verge of extinction from map, getting ready to be completely gulped by the sea.

The lamentation of locals is immeasurable, beyond comprehension to describe. Once upon a time living the life in prosperity, the natives now leading the life of despair and deprivation.

They have no land to practice agricultural activity or animal rearing work. Imposition of ban on inland fishing by forest department left them without any choice.

Youngsters are opting for involuntary migration to other states to support the family, leaving the elderly and disabled at the rehabilitation centers.

The rehabilitation center created in 2015 by the government of Odisha out of humanitarian concern is located in a swamp and marshy land that needs to be filled with soil before constructing any house and people lack the resources to do so as they have no regular source of income.

The elderly locals when asked about the reason of sea ingression at Satabhaya region, they are of opinion that needs to be heard loudly.

Satabhaya, adjacent to the Paradeep beach, faced the wrath of mighty sea due to the destruction of natural sea barrier of dense mangrove forest at the Paradeep region.

This area was developed as a port in 1966 by clearing the compact and thick mangrove forest.

Fortification of the area with compressed impermeable stone wall to prevent from sea erosion, generated sufficient force in the sea waves to encroach the neighboring Satabhaya beach.

This policy level blind spot of resorting to economic development at the cost of ecology when conjoined with climate change forces generated sufficient action of intimidation that destabilize the local communities reducing their status from natives to climate refugees.

Mangroves are the natural barriers of sea incursion. Strong multilayer root system of mangrove forest prevents the forces of waves to make inward progression of sea towards human habitation.

These areas are home to millions of tiny saltwater creatures that plays vital role in aquatic ecosystem. The evergreen mangrove forests are the great agency of carbon sequestrations and helps in purifying atmosphere.

These forests are also great source of provisioning of daily needs of human society like food, fodder, fuel and medicines.
Major portion of our blue planet consists of water in the form of sea, ocean, lake, pond and rivers.

The grandeur and majestic power of ocean and sea is well known fact to everybody on the earth.

In the context of global warming the brine is getting momentum to expand its arena with stupendous strength.

Repeated formation of cyclone, storm surge, increasing turbulence in sea surface, coastal erosion in recent years are the symptoms of sea world getting mightier with each passing years hence posing the risk of inward progression of salt water in to the land mass.

The case study of Satabhaya is speaking out loud about the precarious condition of a community who once upon a time lading the life with prosperity.

Now this community is having a substandard life with all the amenities gone including food, house, peace, harmonious living condition and welfare of the family.

In an atmosphere of climate change to keep the salt water at bay, it is of utmost priority to generate mangrove forest along the coast line as have been demonstrated by Bangladesh.

The afforestation of mangroves in the coast line of Bangladesh has significantly reduced sea related devastation and destruction in the country.

Lessons from the neighboring country might help Odisha in solving the continuous onslaught of sea into its economy and help the state to rebuild it in better way having economic growth along with robust ecology to harness the welfare of the community.